MUSEUM MUSINGS: The Inn on the Lake

The Christiana hosted fashion shows, dances, public meetings, après ski entertainment, and films, and even offered a free bus service for guests in the ski season
Apr 3, 2021 10:00 AM By: Allyn Pringle 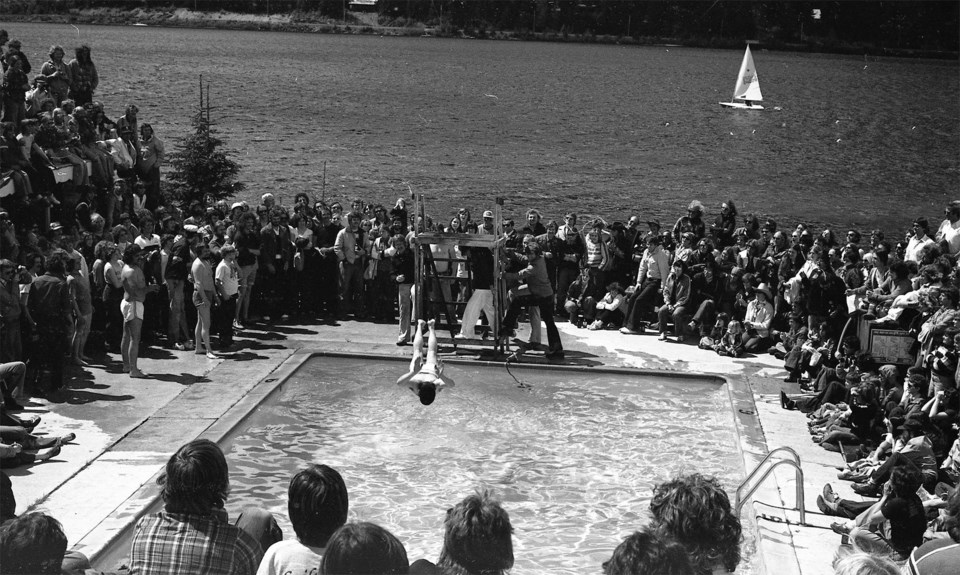 Crowds gather for the belly-flop contest at the Christiana Inn on the May long weekend, 1978. Photo submitted

At the Whistler Museum we often hear stories about the lodges that used to be plentiful around Alta Lake (as well as Nita Lake) from people who worked, stayed, partied or even lived at one sometime between the 1930s and 1980s. Some of the lodges, like the Mount Whistler Lodge, began as summer resorts before skiing was really thought of in the area, while others, such as the Christiana Inn, were part of the increase in development that started with the building of lifts on Whistler Mountain.

Sandy and Puddy Martin, who developed much of the Alta Vista neighbourhood, opened the Christiana Inn on the eastern shore of Alta Lake in 1967. They reportedly named their new venture after a similarly named lodge in Sun Valley, ID. The Christiana facilities included a heated, outdoor swimming pool, a beauty salon, gift shop, lounge area, and dining room.  Located only five minutes from the lifts on Whistler Mountain and offering many activities around the lake, the Christiana catered to both winter and summer guests.

In the late 1960s, the Martins added on to the Christiana with a tennis court, a poolside dining and dancing area, and even a second dining room. The Christiana hosted fashion shows, dances, public meetings, après ski entertainment, and films, and even offered a free bus service for guests in the ski season. Over time, the pool was covered with a fiberglass roof in the winter and was opened to guests not staying at the Christiana for a nominal fee (in 1973, this fee was $1 for adults and $0.50 for children).

Sandy and Puddy sold the Christiana Inn in the mid 1970s. In 1979 the management of the lodge was taken over by brothers Ole and Per Christiansen, who hoped to “gradually alter the inn to a Bavarian atmosphere” and began offering traditional German fare in the restaurant (prepared by Swiss chef Pascal Tiphine) and advertising the Christiana alongside the “newly decorated” Side Door Disco.

It would seem that it was during the mid-to-late 1970s that the Christiana Inn pool began to be known for belly flop and wet T-shirt contests. In May 1978 Brad Cooper wrote in The Whistler Question that “May 22 at the Christiana Inn will be well-remembered as the day over 20 people attempted to splash the most water out of a pool and live to tell about it.” He described hundreds of spectators crowding the pool area and watching from the roof and gave credit to the Christiana and organizers for a “wild but harmless event.”

Others did not find these contests quite as entertaining. In a letter to the editor of the Question in June 1979, T. Wood described the awards ceremony of the Great Snow Earth Water Race as “a fiasco at sleazy Christiana with wet T-shirts and belly flops, which require no talent.”

They claimed one contestant from the race was even “pushed into the filthy Christiana pool.”

In March 1980 rumours claimed that the Christiana Inn had unexpectedly ceased operations, causing the Whistler Rotary Club to lunch at the Filling Station instead. The then-owners of the Christiana, Travelscope Hotels Ltd., reported that the lodge was still operating but that the management company that had been in charge was no longer operating the hotel (it appears that the management had left town while still owing money to their employees).

The hotel and bar were still open, though the kitchen was temporarily closed due to a fire in the deep fryer.

In May 1980 the Christiana reopened for the summer as the Alta Lake Inn, well-remembered for its restaurant, which offered Chinese food and take-out. Later in the 1980s, the Alta Lake Inn closed as a resort and the property was converted into private condos, known today as Whistler on the Lake. Stories of the Christiana Inn, however, continue to be told throughout Whistler. If you have stories you would like to add to our records, let us know at the Whistler Museum.