By the early 1970s, various developments had begun to appear in the Whistler area spurred on by the growing success of Whistler Mountain.
May 6, 2021 7:00 AM By: Allyn Pringle 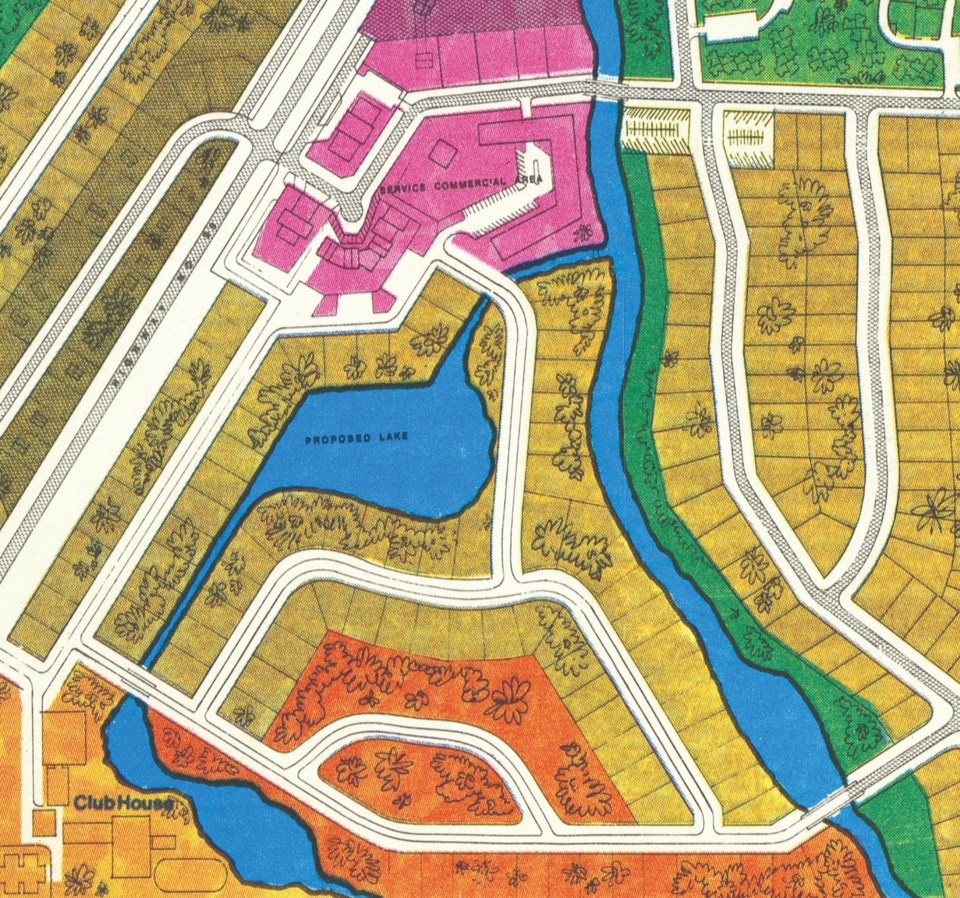 This map shows the plans that the Ambassador Development Corporation of Canada Ltd. had for White Gold. Much of the area shown in orange is now protected wetlands. Brown Collection

The original plans for both Adventures West and Tamarisk called for far more units and facilities than can be seen today (Tamarisk was meant to include over 400 units and a “condo-lodge” that would contain a cocktail lounge and dining facilities). Another development that would look very different today if the full plans had been constructed is the neighbourhood of White Gold.

According to a pamphlet in the archives, the Ambassador Development Corporation of Canada Ltd. (ADCC) was planning to build “a whole new community.”

When first promoted, The White Gold Estate was to include large cabin lots, condominiums, a shopping area and a hotel complex spread over 172 acres [70 hectares]. The developers claimed that they would keep a large portion of the natural setting intact, “retaining as much of the park-like landscape as possible.”

The serviced cabin lots were described as being planned “very carefully” to leave as many trees as possible untouched, both to create a “serene” atmosphere and to guarantee privacy for the owners.

A number of these lots had already been sold by the 1970s, with some cabins already under construction. In the fall of 1970, an advertisement in Garibaldi’s Whistler News offered lease-to-purchase lots with a deposit of $250 and three-bedroom cabins available from $16,800. That winter it was reported that Nancy Greene and Al Raine hoped to be settling into their new cabin in White Gold in the new year and by 1972, it was not uncommon to see houses in White Gold advertised for rent or sale.

While some roads and cabin lots were constructed, other parts of ADCC’s plans never came to fruition. The White Gold Estates plans included a commercial area of shops off of Highway 99 near the existing Ski Boot Lodge Motel that opened in 1970. Luxury one- and two-bedroom condos were to be constructed, for which a “qualified management staff” would be provided to look after the units during the owners’ absence or even handle arrangements to rent out units for owners.

According to a map included in the ADCC’s pamphlet, an artificial lake was proposed in the middle of what today is protected wetlands. Along with the lots that make up today’s White Gold, cabin lots would have extended from Fitzsimmons Creek to Highway 99 and even onto the other side of the highway.

There is not much information in the archives about the ADCC or why its plans for The White Gold Estate were not completed. It appears that the company was dissolved by 1979, though it is unclear why.

By the mid-1970s, however, the ADCC had completed the four roads that currently make up White Gold: Nancy Greene Dr. (fittingly named for one of the neighbourhood’s early residents), Toni Sailer Ln. (the Toni Sailer Ski Camps had been operating for several summers by that time), Fitzsimmons Rd. (running parallel to Fitzsimmons Creek), and Ambassador Crescent (presumably named for the development company that built it).

Like other projects from that time, the development that we find in White Gold today is only a part of what was envisioned by early investors in the Whistler Valley.