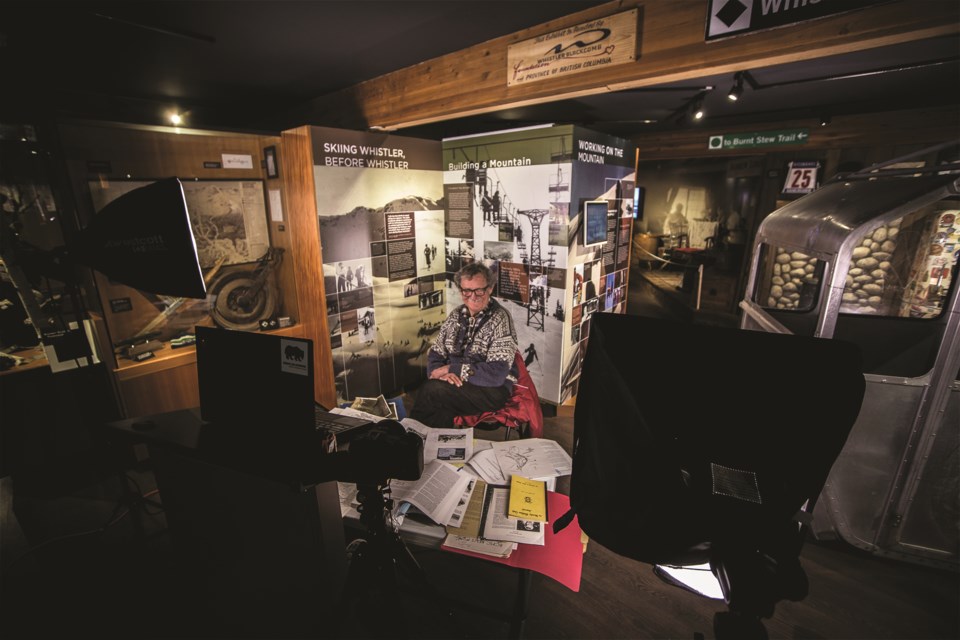 Karl Ricker in the midst of the museum’s recording set-up, with distancing protocols in place and masks for anyone not in front of the camera. Ricker has just donated the journals of the UBC Varsity Outdoor Club from 1964 to 1968. Photo submitted

Back in September, we posted photos on our social media of exploratory trips taken by the UBC Varsity Outdoor Club (VOC) in 1964 and the construction of the VOC Cabin from 1965.  The photos were donated by Karl Ricker, a VOC member who had substantial involvement in the VOC Cabin.

Recently, Ricker brought in copies of the VOC journal from 1964 to 1968 to add to our research collection and, though we’ve only taken a quick look so far (and are looking forward to examining the journals more closely), they appear to be a very valuable addition.

The journals cover a period during which the VOC was exploring the possibility of a cabin in Whistler, its construction and beginning to put the lodging to use. According to the club’s journal of 1964, the VOC Cabin on Mount Seymour was rarely being used as a ski cabin, as members could drive right up to the lifts, and skiing on Seymour was becoming increasingly crowded.  They also found that Seymour was “inadequate as an area for ski touring, for hiking, or for mountaineering,” the “most important activities of an outdoor club.”

Building a cabin in the Whistler area was thought to be an improvement, as the long drive from Vancouver ensured most skiers would stay overnight, there was a proposal to develop lifts on Whistler Mountain, and the surrounding mountains would “present spectacular opportunities for touring and hiking.” Members of the VOC made their first reconnaissance trips to the area throughout 1964 and began construction of the cabin in 1965.

Skimming the journals, mentions of progress on the VOC Cabin are frequent and, as far as we’ve seen, optimistic. In 1967, then VOC President Paul Sims wrote in his report about the upcoming completion of the cabin, saying: “When the last shake is nailed to the wall, and the last stone mortared into the fireplace, the construction at Whistler will be of a different nature.  The shaking will continue but from dances, pots and pans, sing-songs, laughter and conversation. The building will bulge with eager and exhausted outdoor groups instead of construction crews.”

The journals were brought in by Ricker when he came to the museum to record an interview for an upcoming exhibition by the Museum of North Vancouver. We were excited to help facilitate the recording as it gave us a chance to try out equipment we’ll be using in our upcoming virtual events.

Friday, Feb. 12 marks the beginning of our BC Family Day Kids Après: At Home Edition. Rather than invite families to the museum, we’ve created Kids Après Packs that can bring parts of the museum to you. Packs can be picked up for free at the museum and include materials for two crafts and a Kids Après Activity Book, which combines stories from our exhibits with colouring pages, mazes, trivia and more. We’ll also be releasing craft videos online so that you can craft along from home, creating your own skiing snowpeople and a (non-edible) mug of hot chocolate, a staple of Kids Après.

Next week we’ll be hosting our first Virtual Speaker Series of 2021, kicking off the series with Whistler Pride: A Look Back with Dean Nelson.

Though the Whistler Ski & Pride Festival was not able to go ahead this year, you could still see the spirit of the festival in the flags along Village Gate Boulevard and we’ll be learning more about how the festival started and how it has grown with one of its long-time organizers. Go to our website to register for the free event and find out about the rest of our Speaker Series line up for 2021.

UBC students want to dig out access to the Rubble Creek trailhead
Mar 3, 2020 6:01 AM
Comments