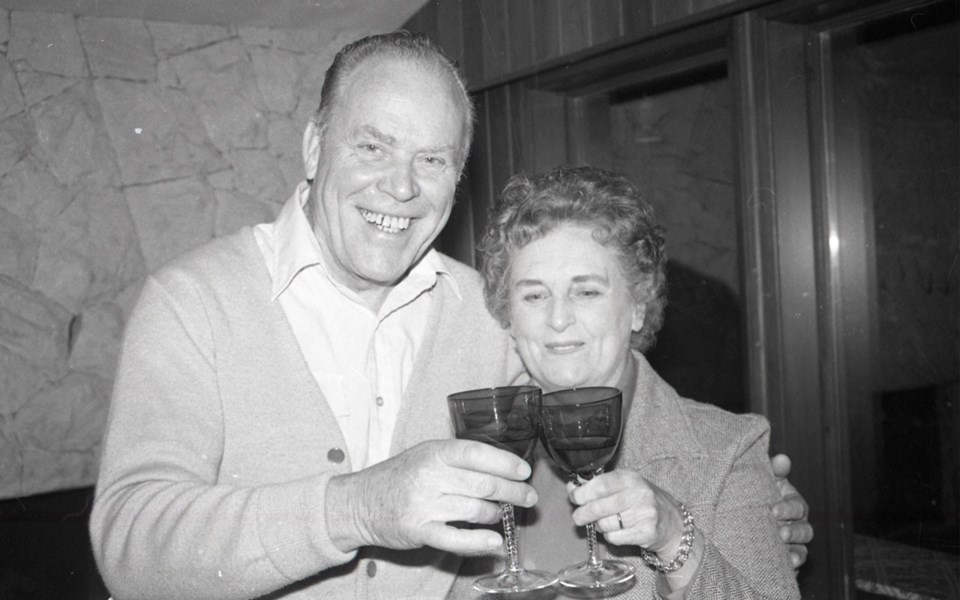 TOAST OF THE TOWN Pat and Kay Carleton enjoy a toast to celebrate their 40th wedding anniversary. Whistler Question Collection, 1981

Pat Carleton became Whistler's first mayor in 1975 and served four terms until 1982. Born in Langley, B.C. in 1920, Carleton was not a career politician. He played trombone as a band member of the Royal Air Force auxiliaries in the Second World War and then made a career as a coffee salesman for 25 years.

In 1956, Carleton's neighbour Ted Harris told him about Alta Lake. Harris and Carleton went on a weekend fishing trip and stayed at Jordan's Lodge. Carleton and his wife Kay later built a cabin along Alpha Lake in 1958 and, after he retired in 1971, moved to their cabin to live full time.

Kay recalled their first winter at the cabin as a record snowfall. They thought if they left at any point they wouldn't be able to get back to Alta Lake until spring, so they stayed full time with no running water and wood heat, which Kay did not particularly enjoy.

Being retired, Pat Carleton had plenty of free time. He became very active with the Chamber of Commerce, the Rate Payers Association, and the Technical Planning Committee, as well as participating in community life. He was also active in advocating for a local government and, when the Resort Municipality of Whistler Act was passed in 1975, he was one of two residents to run for mayor.

Paul Burrows, who later founded the Whistler Question with his wife Jane, ran against Carleton for mayor but lost with 103 votes to 185. Whistler's first council was also elected at this time, which included Garry Watson, John Hetherington and Bob Bishop. Al Raine was appointed to council by the provincial government. Burrows described Carleton as very conservative, fair and well-liked. The area previously known as Alta Lake became officially called Whistler at Carleton's inauguration.

In the early stages the council had nowhere to meet and the Carletons offered up their home for some of their meetings. According to Hetherington, Carleton was instrumental in dealing with the provincial and federal governments to tackle obstacles that faced the development of the resort, such as the lack of a sewer system.

This first council looked to other ski areas in North America to learn from how they had developed. Carleton wasn't a skier, but this allowed him to see different needs for the village that others might have overlooked. (You can learn more about the development of Whistler Village this evening, Thursday, Oct. 24, when we're joined by Eldon Beck, Jim Moodie, Garry Watson and Drew Meredith at the Whistler Public Library!)

Carleton ran for mayor again in 1978 and 1980, unopposed both times. During his years in office he can be credited with the accomplishments of upgrading the telephone system, a local weather office, the post office, and the train station. Over the years Carleton spent a lot of time in Victoria keeping ministers informed about what was happening at Whistler. He worked seven days a week and even remembered holding a council meeting over radio phone during one of his trips to Victoria.

The Carleton Lodge was named after Pat Carleton by a developer from Vancouver during the construction of Whistler Village and a plaque was made in tribute to Whistler's first mayor. It was placed in the hotel's lobby.

Carleton retired from public office in 1982 and spent nine more years in Whistler before moving to Chilliwack with Kay. In 1985 he was awarded the Freedom of the Resort Municipality of Whistler, one of only 14 people to be recognized this way.

Carleton passed away in 2004 at the age of 84, but will always be remembered for his legacy in Whistler.