Recently Whistler Blackcomb announced the first snowfall of the season on the mountains and it has many thinking about what the winter will look like this season.
Oct 13, 2019 1:40 AM By: Paige Vonk 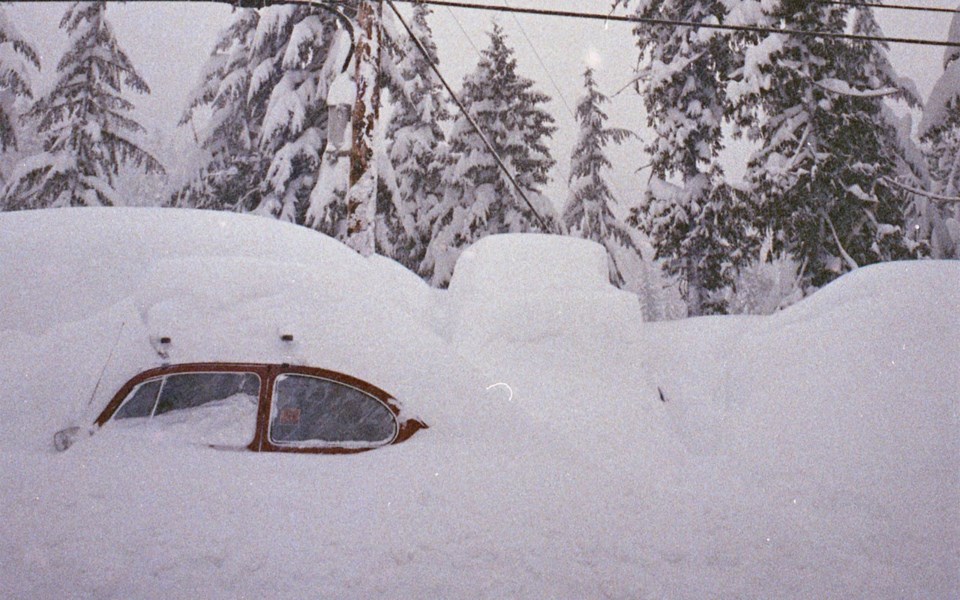 snow woes Unsurprising for a town built on skiing, snowfall has been the talk of the town in Whistler for decades. Photo by George Benjamin Collection

Recently Whistler Blackcomb announced the first snowfall of the season on the mountains and it has many thinking about what the winter will look like this season. Snow is always a major topic of conversation, as we can see by looking back on previous years.

In 1972, Garibaldi's Whistler News noted that the snowfall in the valley was a record high at 943 centimetres, and according to their Fall 1972 issue "there was snow covering the mountain tops mid-September and it looks like another year for early skiing." The average snowfall in the years leading up to 1972 was recorded as 12.8 metres.

This wasn't the case for every year, however. In 1976, the winter ski season was off to a sluggish start. A lot of rainfall and sunny weather in November caused the snow on the mountain to melt, thereby pushing the opening of the mountain back. The Whistler Question reported in December that employees were let go or not hired due to the lack of snow, leaving about 25 fewer people working for the mountain. This also affected the number of tourists that came in to town and had an impact on the economy. Whistler Mountain was able to open for the Christmas holidays, but all skiers had to download using the gondola. In February 1977, the first snow gun was obtained for Whistler Mountain to help combat the lack of snow.

The next winter, 1977-78, was "marked with the return of good snowfalls and a good season for the ski school," as reported by the Whistler Question.

Winter came early again in 1981 as Blackcomb Mountain announced it would be opening a week earlier than planned, while Whistler Mountain remained closed until the scheduled opening on Nov. 26.

El Nino was blamed for the warmest winter on record in 1992 by then Blackcomb president Hugh Smythe, as reported in the Blackcomb Mountain Staff News.

There was a feeling of déjà-vu in 1995-96 as rain affected the beginning of ski season and workers were laid off. American Thanksgiving usually marked the beginning of skiing but that year Whistler Mountain's alpine didn't have a sufficient base of snow, while Blackcomb was pumping water out of its snow guns and hoping the freezing level would drop enough to make snow. Blackcomb Mountain opened on the U.S. Thanksgiving weekend, but with only a limited number of lifts and trails.

Once again, a slow opening was followed the next year by great snowfalls. Meteorologist Marilyn Manso in December 1996 said, "by mid-December we've had more snow on the ground than at any time since records were kept." There was 74 cm of snow on the ground in the valley at this time in December, compared with the previous year of 34 cm.

The first week in December 2001 brought about 1.2 metres of snow on the mountains, which allowed for half of Whistler Blackcomb terrain to be open. This was more than any other ski resort in North America at that time, and allowed for the snow guns to be moved lower on the mountain and provide ski-out access.

Last winter also got off to a slow start, so let's hope that this season brings great snowfalls.