Starting at the village 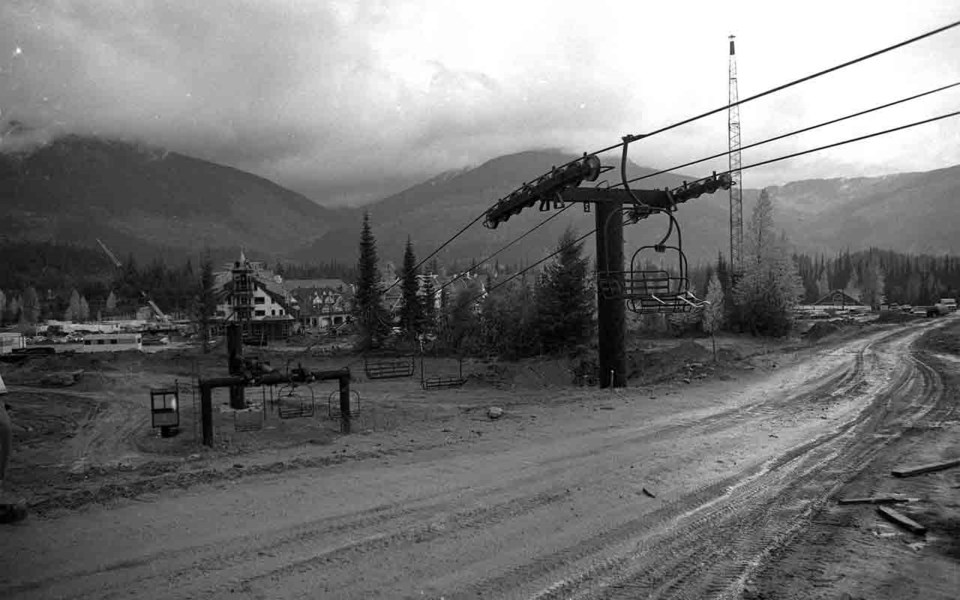 GOING UP Lift One is installed on Blackcomb Mountain during the summer of 1980. Whistler Question Collection

In the past 10 years, Whistler Blackcomb has installed several new lifts on both mountains, replacing older lifts with new ones (such as the new Blackcomb Gondola and Emerald Express) or moving existing lifts to replace others (such as the Crystal and Catskinner chairs on Blackcomb Mountain). While it may seem like there have been a lot of changes in the last decade, the greatest change in lifts in the area was actually seen in the 1980s. A total of 21 lifts were built, six on Whistler Mountain and 15 on Blackcomb. Eight of these lifts opened in the 1980-81 season alone.

On Whistler Mountain, skiers had been skiing down to the site of Whistler Village and catching a bus or a ride back to the gondola base at Creekside for over a decade. In 1980, Whistler Mountain opened three triple chairlifts starting from the village, breaking from its tradition of naming chairs for colours for the first time since opening in 1966.

The imaginatively named Village Chair began at Skiers Plaza and ended at Olympic Station. From there, skiers had a short run down to the aspirationally named Olympic Chair. At the top of the Olympic Chair, they could then ski over to the Black Chair, which let them off at the top of what today is the top of the Garbanzo Express. Reaching the Roundhouse required skiing down to another chair, either the Green or Red.

Of the three lifts, only the Olympic Chair continues to operate on Whistler Mountain today. The Village Chair was replaced in 1988 by the Whistler Express and, instead of requiring four exposed chairlifts, the 10-person gondola took skiers and sightseers alike straight from the Whistler Village to the Roundhouse. In 1999, the installation of the four-person Fitzsimmons and Garbanzo Expresses eliminated the need for the Black Chair. The Olympic Chair was shortened in 1989 and now operates as a beginner chair. It is one of the few fixed-grip lifts still used on Whistler or Blackcomb mountains.

Blackcomb Mountain opened its first five lifts (named One through Five) in 1980. Lift Five was a two-person chairlift designed for beginner skiers, located at Base II, then the hub of Blackcomb operations. The development of the Upper Village and the opening of the Magic Chair in 1987 moved beginners to the new Blackcomb base and Lift Five was removed.

Four triple chairs took skiers from Skiers Plaza to the top of the Rendezvous. Over time, these lifts began to be called by names as well as numbers: Fitzsimmons/One, Cruiser/Two, Choker/Three, and Catskinner/Four. To ride all four chairs could take over half an hour, a long journey if the weather was not great. In 1994, Lifts One through Three were replaced by Blackcomb’s first gondola, Excalibur, and the four-person Excelerator Express. Lift Four remained the only original lift operating on Blackcomb until it was replaced in 2018.

Though only one of the eight lifts installed in 1980 remains, the year marked the beginning of a busy decade of lift-building for both Whistler and Blackcomb mountains.