Not only do we have a trail-rich valley to call home in Whistler, but we are also spoiled with choice when it comes to bike shops. This wasn't always the case.
Jun 8, 2019 12:30 AM By: Alyssa Bruijns 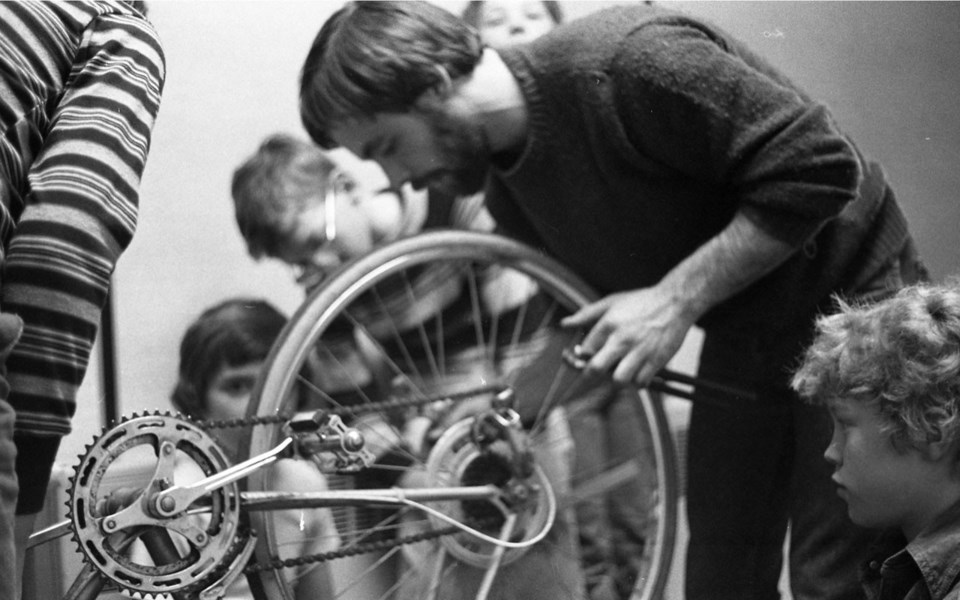 FINE TUNE Bike maintenance is an important skill in Whistler, especially when there were no convenient shops to bring your bike to. Whistler Question Collection, 1980

Not only do we have a trail-rich valley to call home in Whistler, but we are also spoiled with choice when it comes to bike shops. This wasn't always the case.

When mountain bikes first hit the logging roads in the valley in the early 1980s, most riders had to head to Vancouver for any mountain-bike-specific parts and maintenance, according to one of our oral history interviews with local mountain bike pioneer Steve Anderson.

A couple of shops were starting to pop up around that time. In the newly constructed village Jim McConkey's shop sold bikes in summer months and Doris Burma operated a small bike shop out of a trailer right above the commercial loading zone at the Delta Mountain Inn (today known as the Hilton). Doris was passionate about mountain bikes and famed for her Cheakamus Challenge precursor race called "See Colours & Puke," a wild mountain-bike race reportedly meant to be completed on mushrooms.

In the autumn of 1985, Backroads Whistler owner Eric Wight opened a bike shop in the basement of Creekside's Southside Diner. A short time later, the shop moved to the first floor of a house in Mons.

The new location was in the centre of the local mountain bike scene at the time, not far from new trails in Emerald and Lost Lake. The shop sold, fixed, and rented mountain bikes, even building a small trials track outside their door. Eric admits the shops didn't make much money in the early days, as most of the clientele were locals who could only afford parts using "local deals." Big things were to come, however.

In 1989, Eric's shop moved to Whistler Village, finding a spot in the base of the Delta. The location was off the radar for visitors, however, and the clientele was still all locals. The shop finally surfaced on the Village Stroll in the spot where Jim McConkey had sold bikes (currently Showcase Snowboards) around the time Backroads began working with Whistler Mountain to begin mountain bike tours down the mountain. According to Eric, the new shop had a Santa Fe theme, a mechanic shop in the back, rentals and tours, and plenty of snazzy lycra on sale out front.

As mountain biking continued gaining traction, the 1990s saw bikes shops that are still kicking it today start up shop.

In 1994, John Inglis and Peter Colapinto opened the Whistler Bike Co., also in the underground portion of the Delta, for the summer months. In 1995, they brought onboard Giant Bicycles and they eventually expanded to Pemberton, the Village Gate location, and most recently, their Marketplace location to accommodate a growing population of bikers in town.

This week, we'll be celebrating Whistler's mountain biking history with the museum's fourth-annual Mountain Bike Heritage Week. You can find a full list of events at whistlermuseum.org/mtbweek or join us in Creekside post-Toonie this evening for a Retro Bike Show and Shine (you can even bring out your old bikes)!