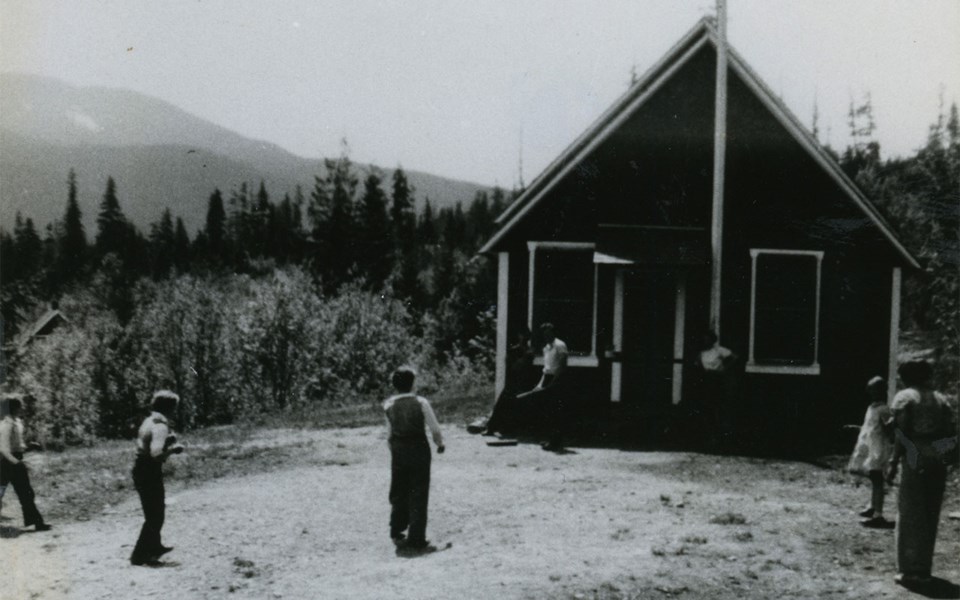 ALL FOR ONE The one-room schoolhouses at Alta Lake may have been small, but according to teachers, they could be a great place to work. Philip Collection.

With the beginning of a new (though uncertain) school year, we thought we’d take a look back at the first school built in the Whistler Valley and one of its teachers.

The Alta Lake School was built in 1931 and operated until 1946, when it closed due to an insufficient number of students. It reopened in a new building in 1956 but continued to struggle with enrolment.

Mel Carrico was born in Alberta and after the Second World War, he and his wife Dagmar decided to raise their family in British Columbia. Though trained as a teacher, Carrico worked for Alcan in Kitimat and the Department of Labour in Smithers through the late 1940s and 1950s. In 1958, he returned to the classroom, teaching first in the one-room schoolhouse in Garibaldi and then becoming the teacher at the one-room schoolhouse at Alta Lake.

According to an oral history interview with Rob Carrico, Mel’s son, his father was asked during his interview with Don Ross, then the head of the school board, how many school-aged children he had, as four were needed to reopen the Alta Lake School. There were technically three potential students, but Rob’s younger sister was put into Grade 1 at the age of five to make up the numbers and Mel Carrico was hired.

The family spent two years living near the school at Alta Lake. Looking back, Rob said his only regret about his time there was that there were no other boys around his age and he had wanted to be a Cub Scout. Most of the students came from families employed by the Pacific Great Eastern Railway. No matter their age, all students learned in the same classroom. Rob remembered that, “It was always interesting because you could listen in on all the lessons.” If the Grade 3 lesson was not too exciting, the Grade 5 lesson might have been more intriguing.

According to Rob, Alta Lake was “a good place to go to school,” partly because of the nearby creek where one could go at recess to catch Kokanee. Each year, his father ensured that the school put on a big Christmas concert, usually including a puppet show. The students would help to make marionettes and a stage would be constructed at the school. The concert was a big event for the small Alta Lake community.

Rob remembered the community as closeknit, where neighbours would look after each other, visiting often and coming together for bingo and other events, such as the Ice-Break Raffle and the summer fish derby (which he thought might have just been an excuse to gather a lot of fish and have a big community fish fry).

The Carricos left Alta Lake in 1961 when Rob’s elder sister reached high school. The Alta Lake School did not teach higher grades and so she would have had to leave her family and attend school in Squamish while being boarded. Instead, the entire family moved to Squamish and Carrico continued to teach in the school district. He retired as the principal of Mamquam Elementary School.