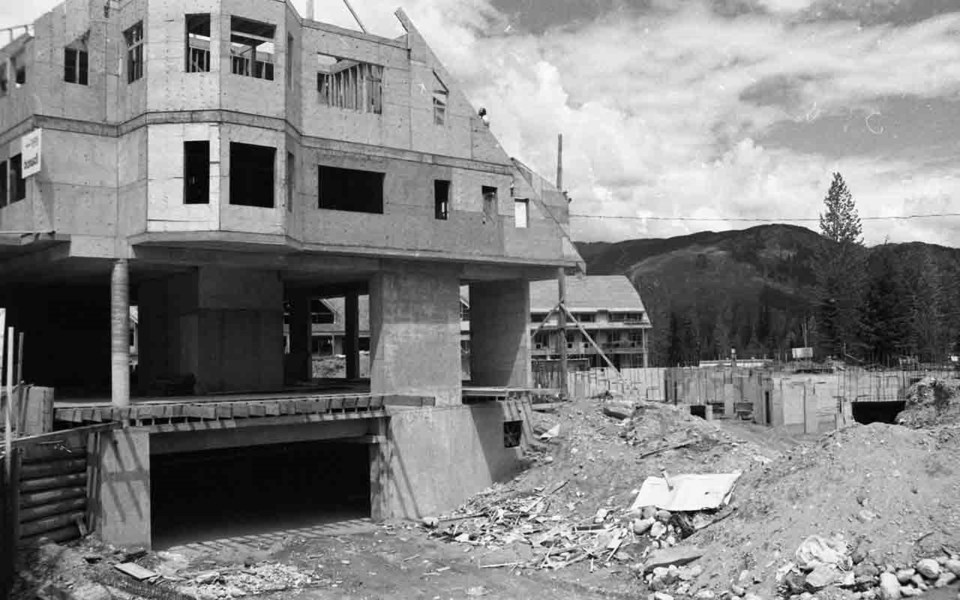 Visitors to Whistler in July 1980 would have strolled past construction sites like this one rather than down the Village Stroll. Whistler Question Collection, 1980

There is a lot to do in Whistler in the summer, even with the restrictions currently in place across British Columbia. You can go up the mountains to hike and ride the Peak 2 Peak, hike throughout the valley, relax at a lake, or even visit Whistler’s Cultural Connector (which includes the Whistler Museum).

What about, however, if you had visited Whistler during the summer of 1980?

Thanks to Whistler News, a supplement published by The Whistler Question, we can get an idea of what summer visitors to Whistler could have expected 40 years ago.

The first step to visiting Whistler was getting here. Though it’s relatively easy today to find your way to Whistler, in 1980, there were no directional signs in Vancouver pointing the way and Whistler News encouraged drivers to obtain a road map and head north on Highway 99.

The drive up included a 12-kilometre section through the Cheakamus Canyon that was set to be realigned and improved by 1981 but was still somewhat treacherous. This was still an easier route than those from the north. The route to Whistler through Bralorne was suitable only for four-wheel-drive vehicles and the Duffey Lake Road would not be paved until 1992.

Visitors had a choice of lodgings, both in and near to Whistler. While some of these lodgings, such as the Highland Lodge and Whistler Creek Lodge, are still standing, others such as the Alpine Lodge (a lodge and cabins located in Garibaldi, which the provincial government declared unsafe in 1980) and the White Gold Inn (more commonly known as the Ski Boot Motel) have since been demolished.  Those looking to camp had quite a few options, including a BC Hydro campground at Daisy Lake and a forestry camp at the Cheakamus and Callaghan Rivers. Supposedly, the summer of 1980 was also going to see the construction of new camping facilities as part of Lost Lake.

Whistler also offered a variety of dining options, from Chinese cuisine at the Alta Lake Inn Dining Room to The Keg at Adventures West. Those looking to provide their own meals, however, were encouraged to plan ahead, as the only grocery shopping in the area was at the Gulf and Husky Mini-Marts.

Visitors could still do many of the things that have brought people to Whistler in recent summers. They could go hiking around the valley (Lost Lake was recommended as having the “spectacular sight” of the ski jump) and spend time around and on Whistler’s lakes, where windsurfing was becoming increasingly popular.

Those more interested in snow could attend the 15th year of the Toni Sailer Ski Camp, perfecting their skiing under the direction of Toni Sailer, Nancy Greene, Wayne Wong, and Bob Dufour.

The summer of 1980 was also a season of huge changes in the area and would have offered visitors many opportunities to view construction in the valley. There was not yet a Whistler Village as we know it today.

In the Town Centre, the first buildings of Phase I were expected to open that season and construction of Phase II buildings was underway. Late in the summer, Whistler Mountain installed its first lifts that ran from what would become the Whistler Village. At the same time, Blackcomb Mountain was building its first lifts, as well as on-mountain restaurants and utility buildings.

With all this construction, changing businesses and development, it’s no surprise that summer visitors to the museum will often tell us that Whistler is almost unrecognizable as the same place they visited in the ‘70s or ‘80s.