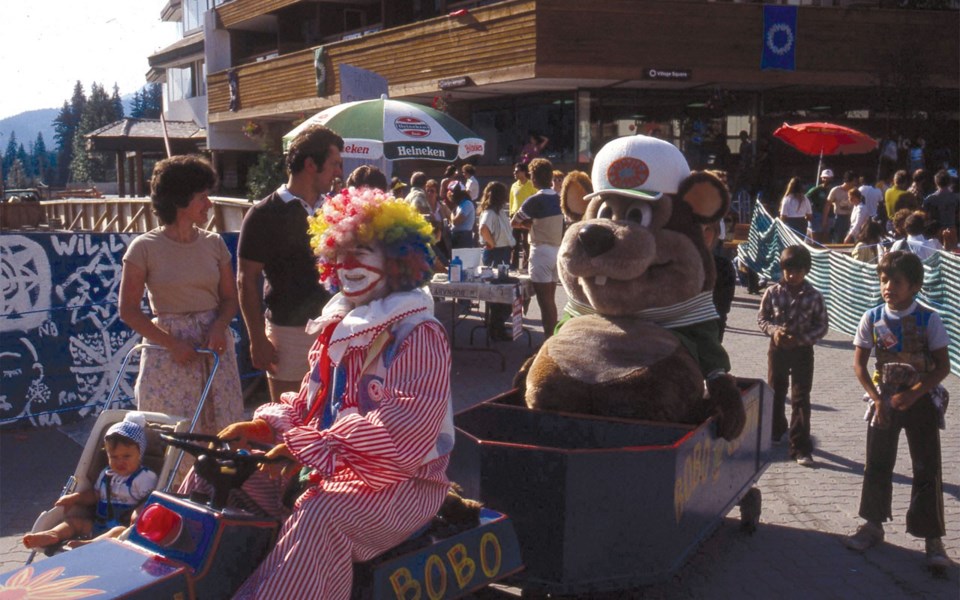 It may technically still be (and at times even feel) like summer, but for many people the beginning of September signals the beginning of fall. While many people will spend this weekend celebrating a certain beverage at the Whistler Village Beer Festival, in the 1980s, this weekend would have featured a celebration of the upcoming season with the Whistler Fall Festival.

The Fall Festival was first organized by the Whistler Resort Association (WRA, now known as Tourism Whistler) in 1981. At the time, Whistler Village was beginning to emerge from a craze of construction and Blackcomb Mountain was looking forward to its second season of operations. There was a lot to celebrate in Whistler and the festival featured many of the growing community's arts, crafts, sports and activities.

One of the local characters showcased at the Fall Festival was Willie Whistler, the new mascot of the WRA. Willie's name came from a "Name the Whistler Marmot" contest for children in the area in which the winner, eight-year-old Tammi Wick, won a Blackcomb season pass. The mascot was created to promote Whistler at local and other events and the Fall Festival, which included time each day to "Meet Willie Whistler,'' was his first big event.

The festival also featured local artists and artisans who demonstrated their crafts in the village, including pottery, fibre spinning, stained glass, and painting. Performers over the weekend included acts such as Evan Kemp and the Trail Riders, the Alpini Band, and local favourite Doc Fingers, as well as dance performances and Bo Bo the Clown.

For visitors and residents alike, the Fall Festival offered different ways to see the Whistler Valley. Snowgoose Transportation offered free, 50-minute bus tours, showing off everything from residential areas to the gondola base in Creekside to the Blackcomb Daylodge.

To see the valley from the above, participants could enjoy a flight from Okanagan Helicopters, take advantage of Blackcomb Mountain's offer of free chairlift rides, or, subject to wind conditions, go up in Chuck Bump's hot air balloon, billed at the festival as the "World's Largest Hot Air Balloon."

Perhaps not surprisingly, sports and competitions also featured prominently at the Fall Festival. Spectators could take in volleyball, pro/celebrity tennis matches that paired pro players with notables from politics, business, and media, a softball game between the Whistler Contractors Association and the Whistler A's, or even a parachuting demonstration.

For those looking to compete, the Waiters Race challenged Whistler's servers to run a timed obstacle course without spilling a drop, and the Labatt's Great Whistler Water Race relay covered four lakes and the River of Golden Dreams through canoeing, kayaking, swimming, and windsurfing.

Though the Fall Festival was primarily about showcasing Whistler, it also raised money for several different causes. On the Sunday, Whistler hosted a run as part of the first national Terry Fox Run, raising over $7,600. The proceeds from a beer garden hosted by the Whistler Athletic Society that evening were also donated towards cancer research.

Local causes benefited as well. The WRA donated enough funds from the Village Centre beer garden to replace the snowmobile of the Alta Lake Sports Club that had been destroyed in a fire. Umberto Menghi, who was then opening his new restaurant Il Caminetto, contributed to the festival by both providing the fireworks display for the Saturday evening and hosting a gala dinner at Myrtle Philip School to benefit the Whistler Health Care Society.

According to Glenda Bartosh of The Whistler Question, the first Fall Festival was about far more than raising money and generating revenue for the resort. She reported that the festival "created laughter, high energy and a true appreciation of what Whistler is all about."

The WRA must have agreed, as they continued to organize the Fall Festival for at least three more years.

Whistler experienced its own labour strife, as photos reveal
Sep 15, 2020 10:00 AM
Comments
We welcome your feedback and encourage you to share your thoughts. We ask that you be respectful of others and their points of view, refrain from personal attacks and stay on topic. To learn about our commenting policies and how we moderate, please read our Community Guidelines.