A wet end to the holidays 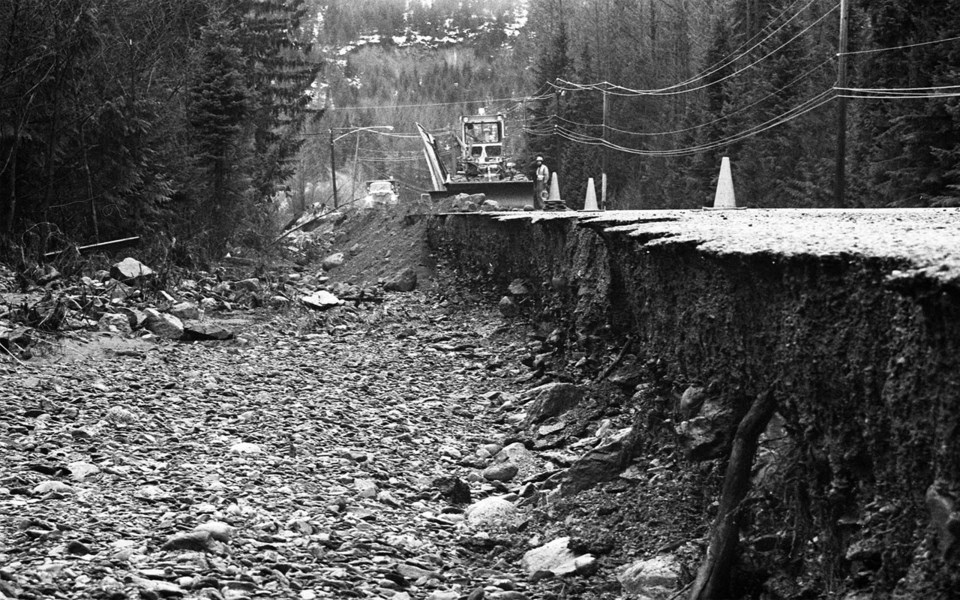 Discussions of weather in Whistler have been going on for decades, as is apparent from past editions of the Whistler Question. In the early months of winter, the conversations usually focus on snow. But reports from January 1981 show that rain, rather than snow, was the topic of discussion.

While there had been snow in early December 1980, it began to rain in earnest in Whistler and the surrounding areas on Dec. 24. The rain had not stopped by noon on Dec. 26 and flooding was occurring in places from Squamish to D’Arcy, as well as in the Fraser Valley and other areas of British Columbia.

Whistler and Pemberton were cut off from the rest of the Sea to Sky by both road and rail, as Highway 99 was washed out around Culliton Creek (today the site of the Culliton Creek Bridge, also known as the Big Orange Bridge) and north of the Rutherford Creek junction. A rail bridge over Rutherford Creek was left hanging by the rails when its supports were washed away and other sections of rail were obstructed by small slides and washouts.

19 Mile Creek overflowed at the entrance to Alpine Meadows, cutting it off from the rest of town.  The bridge on Valley Drive was washed out, taking with it part of the main water supply. In other parts of Whistler, sewer lines, water systems, bridges, roads and parking lots were damaged, though employees of Whistler Mountain worked quickly to divert water at its gondola base as Whistler Creek rose. Helicopters were used to ferry residents and visitors in and out of the valley, including Mayor Pat Carleton, who was in Vancouver at the time of the flood.

At the Garibaldi townsite south of Whistler, rising waters caused one house to be swept into the Cheakamus River and another to tip precariously while others were left unaccessible.

The flooding was partly caused by the unseasonable rise in temperature and freezing levels, meaning most of the early snow melted and added to the rain, as well as washing gravel, logs and debris down to the valley.

By the beginning of 1981, the roads to Whistler and Pemberton had reopened and repairs were underway. Unfortunately, the temperatures were still warm and the rain was not over. On Jan. 21, the detour built around the previous washout at Culliton Creek was washed out, again cutting off access on Highway 99. At first, it was believed that the closure would be quite brief, but Highway 99 remained closed until Jan. 26.

Luckily, at the time there was still passenger rail service to Whistler. The two-car passenger train from Prince George to North Vancouver was already full by the time it reached Whistler that day, but skiers trying to get back to the Lower Mainland were able to fill the baggage car and stand in the aisles. While helicopters and float planes were also used, trains became the most popular means of transport for five days, introducing many travellers to an option they had not considered before.

Rail was also used to transport goods, including delivering the Whistler Question on Jan. 21 and supplying restaurants and food stores. Due to the limited freight space available, Whistler was limited to 10 cases of milk per day and, by the time the road reopened, the stores were out of milk and fresh produce while the gas tanks at the gas station were running low. The Whistler Grocery Store, which was set to open on Jan. 22, considered delaying but ultimately decided to proceed with its opening as planned when it became apparent that many families in the cutoff communities were in danger of running out of certain foodstuff.

On Jan. 26, as the road reopened, snow finally reached the valley again in Whistler. By Jan. 31, sunshine and new snow had brought crowds of skiers back to Whistler Mountain. Further Questions continued to report on the weather and snow, but it would appear that after a dramatic start to the winter, the 1981 season ended without further mishap.