When snowboarding came to Whistler

Looking at Whistler and Blackcomb Mountains today, it is hard to imagine there was ever a time when snowboarders weren't allowed to ride on the mountains.
Jan 13, 2020 12:00 AM By: Paige Vonk 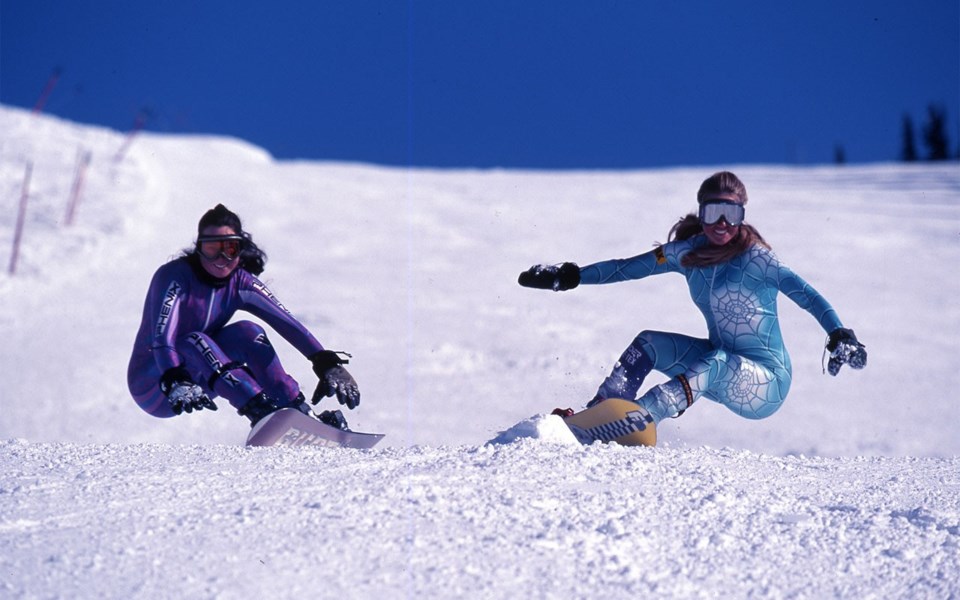 Deep carves Snowboarding was first welcomed on Blackcomb Mountain in 1988, but the sport has changed a lot since the 1980s. Griffith Collection

Looking at Whistler and Blackcomb Mountains today, it is hard to imagine there was ever a time when snowboarders weren't allowed to ride on the mountains. For over a decade, skiers were all you would find in Whistler Valley, until Blackcomb Mountain became the first of our local mountains to welcome snowboarders in the winter of 1988-89 (Whistler Mountain followed suit the next season).

Blackcomb soon became the freestyle snowboard mountain. Before the first official terrain park was built in 1993, Stu Osbourne, who started working for the mountain in 1990, recalls snowboarders and skiers taking air off of the wind lip on a glacier. "That's where I first saw the first photos of Ross Rebagliati and Doug Lungren. I think he was one of the guys back then that did one of the biggest air ever off the wind lip," said Osbourne.

Rebagliati began with skiing and was a ski racer with the Grouse Mountain Tyees. While in high school, a couple of his friends convinced him to try snowboarding.

"I started to snowboard before we were 'allowed' to snowboard," said Rebagliati. He defined the culture as underground. When snowboarders were finally officially welcomed on Blackcomb Mountain in 1988, he came up from Vancouver with some friends on opening day and was one of the first snowboarders to ride the chairlift on Blackcomb.

In 1987, when Rebagliati was 16, he attended the first ever snowboarding camp in Canada. The camp was led by Craig Kelly, who Rebagliati depicted as the Wayne Gretzky of snowboarding. At the camp, Kelly's recognition of Rebagliati's talent gave him the confidence he needed to pursue the sport seriously, including joining the Burton team.

Snowboarding took off through the 1990s and the 1998 Winter Olympic Games in Nagano, Japan, were the first to include snowboarding. By then a Whistler local, Rebagliati became the winner of the first Olympic gold medal for snowboarding, beating out the silver medal winner by .02 seconds in the men's Giant Slalom event. His win, however, became uncertain when a urine sample showed trace amounts of marijuana. Rebagliati's medal was taken away, but then eventually returned to him. He insisted that he only inhaled second-hand smoke and didn't actually smoke at all himself before the competition.

Rebagliati pulled out of World Cup racing not too long after his Olympic win and didn't compete in the 2002 Olympics. He spent time working on media projects, launching his own snowboard, and building a home in Whistler that he described as "the house that snowboarding bought."

Over the past three decades, snowboarding has become firmly established as part of the Whistler community and many celebrated snowboarders have trained on both Blackcomb and Whistler Mountains. The museum, however, is lacking information about the sport and athletes in our collection, perhaps because snowboarding is still thought of as quite a young sport.

If you have any snowboarding stories you'd like to share, please come see us at the museum! We're looking for personal accounts, photographs, artifacts, and more to fill the gap in our collection and ensure that the snowboarding history of Whistler is as well documented as the valley's history of skiing.