Whistler experienced its own labour strife, as photos reveal 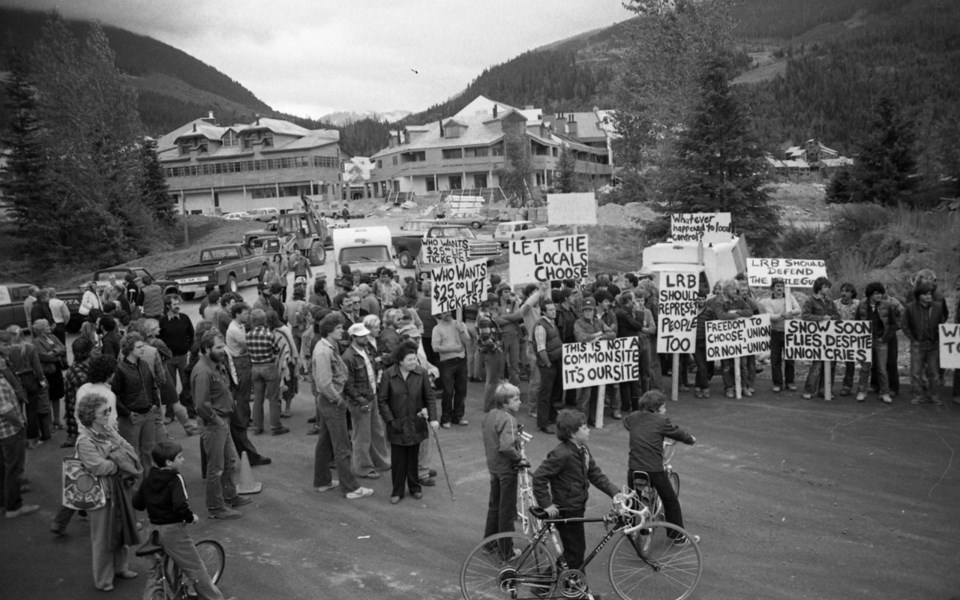 Throughout 2018, the Whistler Museum’s blog, Whistorical, published a weekly feature called “This Week in Photos.”  We had recently finished scanning the Whistler Question collection of photos from 1978 to 1985 and used the photos (which were helpfully arranged by their week of publication) to illustrate what was happening in Whistler in a particular week for each year the collection covered. Most photos that had been published in the paper were catalogued with captions that helped provide context, but for some photos, you need to go to copies of the Question to understand what’s pictured. One such photo can be seen above.

The image of a protest in front of a partially constructed Town Centre was published in the week of Sept. 11, 1980 but the story behind it can be found in the Question throughout that year. The first report of tensions around Town Centre construction projects is found in an editorial from June 5, 1980. The dispute was mainly over whether the Town Centre was considered an integrated site, allowing both union and non-union workers to work on the different parcels, or a common site, allowing the Town Centre developers to employ only union workers. There were four parcels being built by non-union contractors at the time.

The Labour Relations Board (LRB) had been asked to make a decision on the matter. On June 11, the Whistler Contractors Association (WCA), headed by Doug O’Mara, attended the talks with a letter from Mayor Pat Carleton and the rest of council expressing a desire to keep the Town Centre as an integrated site, allowing the independent contractors of the WCA to continue working there.

The LRB chose not to make a ruling at that time and construction of the Town Centre by both union and non-union workers continued over the summer, though there was still tension.

Over the August long weekend, the unions did stop work for a day, leading to what the Question described as “an extra long weekend.” However, the Question editorial staff were confident enough that the construction season would end without a major disruption that they published an editorial on Aug. 21 thanking those who had kept the Town Centre moving and claiming “we’re fairly confident that the relative harmony that has existed over the area for the summer will extend into the fall.” One week later, on Aug. 28, approximately 200 union workers walked off the Town Centre site. This action began another hearing of the LRB beginning on Sept. 3.

The rally pictured above was quickly organized by the WCA and took place on Sept. 4. More than 300 people turned out to support the WCA and signed a petition to be taken to the LRB. The rally also attracted media attention and interviews with O’Mara, Nancy Greene, and other contractors were aired on CBC and CKVU and featured on the front page of The Province newspaper.

The talks with the LRB continued for almost two weeks while the remaining construction season got shorter. On Sept. 15, the LRB announced that it needed to further investigate the issue and would send two officials to Whistler. In the meantime, the Town Centre was to be treated as an integrated site.

Work resumed on the Town Centre over the next week, just in time for the Premier and Cabinet to visit, but the dispute did not end there. The LRB announced on Dec. 2 that, effective Jan. 1, 1981, the Town Centre would be considered a common site, excluding the Whistler Golf Club and work on Blackcomb Mountain, which opened just two days later. The WCA stated that it would appeal the decision, but Mayor Carleton was not hopeful the decision would be reversed.

Though looking through the Question doesn’t always provide the whole story behind a photograph, it often helps provide some context.