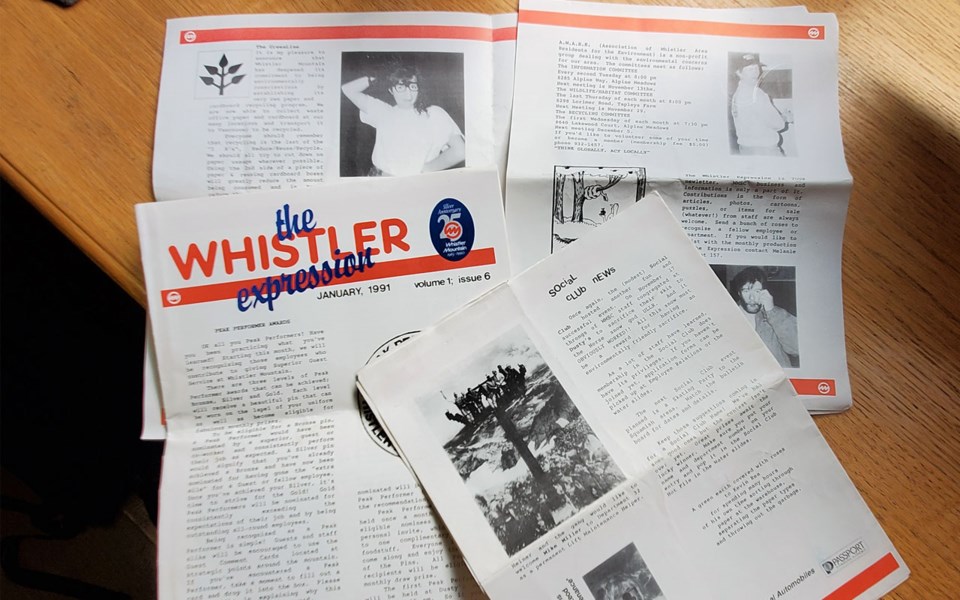 Over the last year, we’ve looked at some of the newsletters we’ve come across in our collections, including one written by the Whistler Museum in 2001 and a whole series of newsletters published by Blackcomb Mountain (the Blabcomb) in the 1980s and ‘90s. While the museum has been closed to the public from March through June, we continued to receive donations to our archives, including a few issues of The Whistler Expression, Whistler Mountain’s counterpart to the Blabcomb.

The issues donated come from the 1990-91 ski season, Whistler Mountain’s 25th-anniversary season. Much of the content of the newsletters is what you would expect to find in a company publication—a start-of-the-season welcome from executive vice-president and COO Don Murray, an end-of-season message from president Charles Young, announcements of new programs (for example, a paper-recycling program that featured prominently for two months) and introductions to new staff members (such as Bruce Warren, then the new controller for Whistler Mountain Ski Corporation (WMSC)).

Though today, many visitors and even residents may not know that Whistler and Blackcomb Mountains were once competitors, there are a few references to a seemingly friendly rivalry throughout the newsletters. At the time, Charles Young served as the president of the fundraising committee for the Dandelion Daycare Centre and made a promise that Whistler Mountain would match any donation made by Blackcomb Mountain, which promptly donated $10,000, showing that this competition could be good for the community.

Despite being published almost 30 years ago, many people, organizations, and even events mentioned in the newsletters are familiar today. In November 1990, the Whistler Mountain Social Club held a (by all accounts successful) ULLR party to sacrifice skis to the Norse snow god, and in January 1991, Kevin Hodder won the contest to name the staff social club. His entry was Club Shred (Staff Having Really Excellent Days), a name that can still be found on staff passes.

During this season, WMSC introduced Peak Performer Awards “recognizing those employees who contribute to giving Superior Guest Service at Whistler Mountain” (not unlike Blackcomb Mountain’s ICE Awards) and published the names of those who were recognized. If you worked at Whistler Mountain in 1990-91, there is a good chance you would find your name on the four-page list alongside Pat Beauregard, Ruth Howells, Pat Bader, Viv Jennings, and many more.

The newsletters aren’t all made up of lists, and two of the most exciting incidents related in The Whistler Expression featured Bill Duff, fittingly the same person who donated the newsletters to our collections.

One day in December, a call to all radios about a pair of stolen skis was promptly resolved when Duff saw a man exit the Express with just such a pair. He had apparently mistaken the skis for his own and so the incident ended with “one very happy skier who got their skis back, one very red-faced gentleman who had to wait until his own skis were brought down and one very proud validator who saved the day.”

That same month, Duff (or “Ticket Validator Extraordinaire”) saw a family tobogganing on the busy run at the base of the mountain and went over to advise them of the danger. As reported in The Expression, “After speaking with the father, Bill said, ‘Has anybody ever told you that you look like Chuck Norris?’  To which the gentleman replied, ‘I am Chuck Norris!’”

While we have almost a full run of the Blabcomb, we currently have only four issues of The Whistler Expression. Newsletters are a great source of information about an organization, who worked there, and what was happening in town around them. If anyone happens to come across copies while cleaning or reorganizing, we would love to see them!