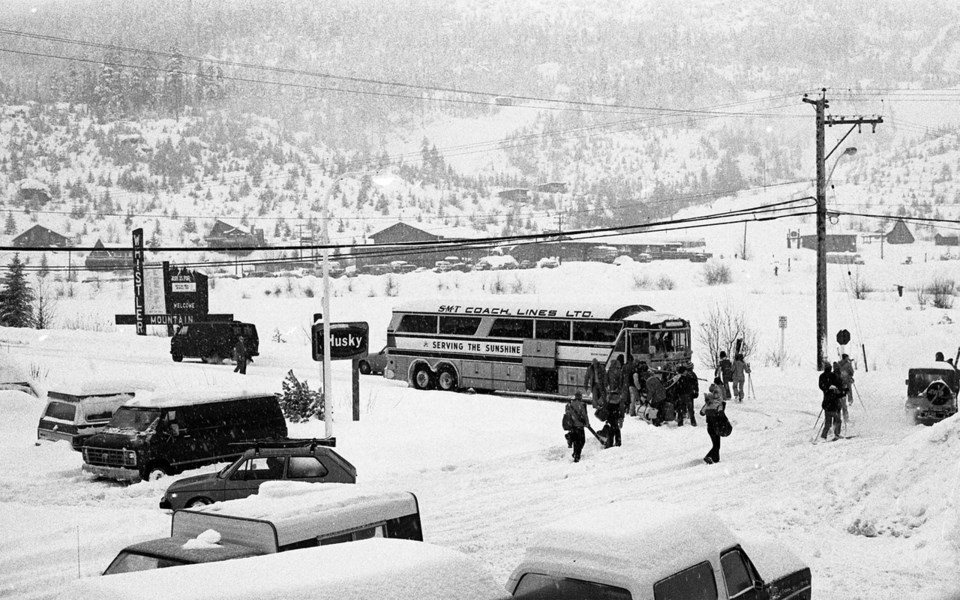 SOME THINGS NEVER CHANGE A bus picks up skiers at the gondola base, today known as Creekside. Whistler Question Collection, 1979.

When talking about the creation of the Resort Municipality of Whistler (RMOW) in 1975 and the early development of the Whistler Village through the 1980s, one of the documents that is often mentioned is the “Silver Book,” also known as the Community Development Study for the Whistler Mountain Area.

The Silver Book was put together in 1974 by the planning services division of the Department of Municipal Affairs of BC and contained a study of the current state of the area, thoughts on potential growth, and a recommended framework for creating both a short- and long-term community development plan. The report was a key factor in the formation of the RMOW and was one of the first documents to recommend a single-centred town centre on the site of the garbage dump.

The Silver Book also included plans for residential development, infrastructure such as sewer and water systems, further recreational development, and transportation both to and within the area. Reading through the report, it is clear that some of the transportation woes experienced by Whistler in the past few years are similar to those thought of back in 1974.

At the time, almost all travel between Whistler and Vancouver was done by private automobiles on the two-lane highway. According to the report, “At peak times, particularly winter Sunday evenings, traffic on the highway is almost bumper to bumper.” The capacity of the highway in winter conditions was calculated to be about 500 vehicles per hour, but with many skiers arriving and leaving at the same time the traffic slowed to a crawl.

The idea of building a new road with a different route to Whistler was dismissed as too expensive at $80 to $100 million (adjusted for inflation, $400 to $500 million), as was a proposal to expand the existing highway significantly.

Using rail to expand transport capacity was considered, but it was concluded that the railway, designed for moving freight, “does not lend itself to the operation of high-speed passenger trains.” A weekend ski-train was proposed, but this would have removed only 600 skiers per day from the road. Though increased bus service was expected to provide only a modest increase in capacity, it was considered the most effective solution.

Buses were also an important part of the transportation plan within the Whistler area. The community was expected to develop in a linear fashion along the highway and be “somewhat sprawling.” The plan for a single town centre area meant that municipal and commercial services would require travelling outside of the different subdivisions, which, if all trips were taken in a private automobile, could lead to excessive traffic noise, air pollution, and “aesthetically inappropriate large-scale parking lots” at the town centre. Instead, the recommendation was to develop an efficient public transport system within the valley.

The Silver Book outlined several ways of encouraging the use of public transport, but only one was marked “not workable” by the donor of one copy in our collections: toll gates and restricted parking.

The idea was that toll gates at the north and south ends of Whistler would encourage visitors to take a bus or train, while residents could apply for an annual windshield sticker that would allow them through. These “stickered” vehicles would, however, not be allowed to park at the town centre during peak periods, thereby “forcing” residents to use buses and reducing the size of parking structure needed.

The Silver Book provides an interesting look at what the province thought Whistler could become from the early 1970s. Some of the plans and predictions of the report (such as the linear development) have been realized while others either have never come to fruition (toll gates) or have far exceeded these early plans.