It took forty years for Whistler's dream of hosting an Olympics to come true
Feb 7, 2018 5:00 PM By: Allyn Pringle 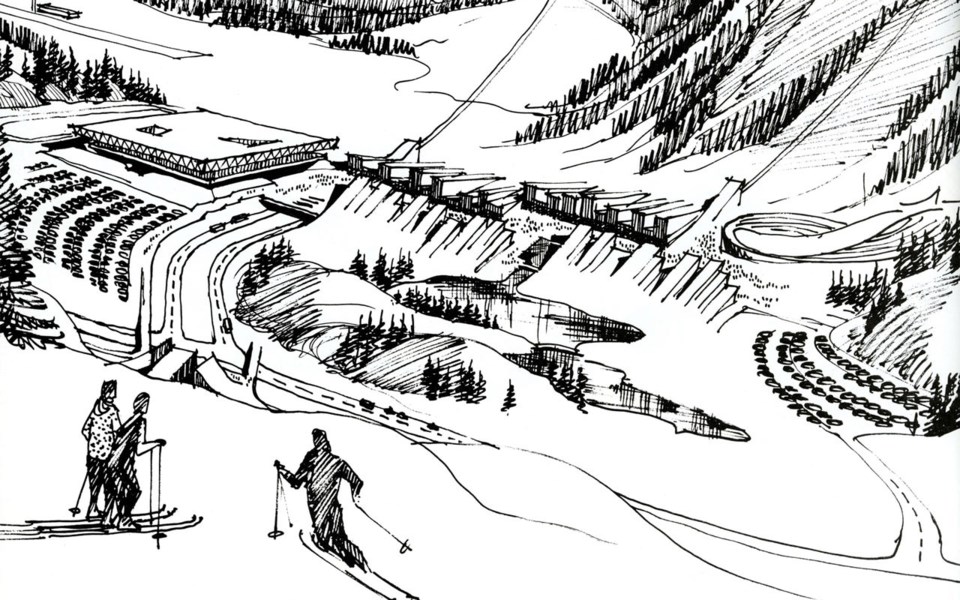 The planned location of Olympic venues for the 1976 Games would have made for a very different Village than the one we know today. From the 1976 Vancouver/Garibaldi bid book.

With the 2018 Winter Olympics beginning tomorrow in PyeongChang we're taking a look back at Whistler's own Olympic past.

There's no doubt that over the past six decades this town has been greatly influenced by the Olympic and Paralympic Winter Games. If the Garibaldi Olympic Development Association (GODA) had had its way, this month would mark the 50th anniversary of Whistler's Olympic Games instead of the eigth.

In 1960, a group of Vancouver businessmen and Canadian Olympic Committee (COC) members formed GODA with the aim of bringing the Olympic Winter Games to B.C. In the introduction to their bid for the 1968 Olympics, GODA wrote: "In the northwestern part of Garibaldi Park, only 75 road miles from Vancouver, and part of a picture-postcard panorama of mountains, snow and forest is Whistler Mountain, proposed site of the 1968 Olympic Winter Games. It is this mountain and this area that offers the ideal physical location for the Games."

What GODA's introduction didn't mention was that the 75 road miles (120 kilometres) were mostly logging roads and a difficult drive at the best of times, or that the site had no power, water or sewer and all venues and facilities would have to be constructed from scratch.

Not surprisingly, GODA's first bid was unsuccessful and Banff, Alberta was put forward as Canada's nomination. In the end, the 1968 Games were held in Grenoble, France.

GODA looked to the future and formed Garibaldi Lifts Ltd. to develop Whistler Mountain. Five years later, with lifts now installed and a paved highway linking the site to Vancouver, it put forward another bid for the 1972 Games. Again the COC chose Banff to represent Canada (Banff then lost to Sapporo, Japan) and again GODA went back to work on another bid.

Three separate combined Vancouver/Whistler bids were put forward through the 1970s. By 1970, when the bid for the 1976 Games was put forth, Whistler Mountain had become an established ski resort and was continuing to grow. This bid received endorsement from the COC and was put forward as an official national bid. Because of this, we are fortunate today to have many records of the vision for the 1976 Games.

The official Vancouver/Garibaldi bid book included designs for a purpose-built Olympic Town Site located at the site of today's Whistler Village, including a grand pedestrian concourse to the bottom of the mountain, sloping angular buildings, and a large plaza with a view of the ski jumps. The bid promised that all Olympic facilities would be within a four-kilometre radius of the town site.

Despite a strong bid, Montreal's successful bid for the 1976 Summer Games meant the Winter Games could not be awarded to Canada. Denver, Colorado was chosen but, due to public outcry over environmental impacts and rising costs, the site declined to hold them. The Games were offered to Whistler, but the newly elected Social Credit government in B.C. turned them down and the Games returned to Innsbruck, Austria.

In 1974 the COC approved a bid for the 1980 Games but was rejected by the provincial government. In 1979 Whistler and Vancouver put forward a proposal to host the 1988 Olympic Winter Games, but the COC decided on the ultimately successful bid from Calgary. It was not until 2003, over 40 years after the first bid was put forth, that Whistler learned it would host the Olympics.

Over the next two months, as the Games take place in PyeongChang, we'll all be reminded of the 2010 Games and the experience of playing host to such a massive event.

If you've ever wondered how the planning and details that went into that experience all came together in Whistler, you might just get some answers at our next Speaker Series. Thursday, Feb.15 the Whistler Museum is delighted to welcome John Rae, Mo Douglas and Kristen Robinson for Behind the Games: Creating the 2010 Olympic Experience.