B.C. company moves to suck jet fuel out of the atmosphere

Carbon Engineering plans to produce millions of litres of jet fuel by sucking carbon dioxide out of the air. Could it offer a buffer for a world struggling to electrify or is it an excuse to keep burning oil?

A B.C. company has partnered with two major airlines to scrub jet fuel from the air, potentially opening up a new source of green fuel that could delay the need to decarbonize industries like aviation and shipping.

The company, Carbon Engineering (CE), has long made headlines as a pioneer in sucking carbon dioxide out of the atmosphere.

Backed by $26 million from the British government, it’s now collaborating with the biotechnology company LanzaTech, along with British Airways and Virgin Atlantic, to investigate the construction of a commercial plant in the United Kingdom that would produce more than 100 million litres of jet fuel per year — all made from water and atmospheric carbon dioxide.

Advocates of the nascent technology, known as direct air capture, say it offers a neutral path forward for hard-to-decarbonize industries like aviation, shipping, steel and cement production, and long-haul trucking.

By burning CO2 pulled from yesterday’s emissions, a vehicle’s carbon footprint is largely cancelled out, they say.

In a written statement, British Airways CEO Sean Doyle described such sustainable aviation fuel plants as “a game-changer for our industry,” delivering both green fuel and jobs.

“We see direct air capture as a tool that allows the elimination of any emissions, anywhere on the planet, at any moment in time,” says Carbon Engineering CEO Steve Oldham.

Could direct air capture offer a buffer for a world struggling to electrify? Or, as some critics level, is it an excuse to keep burning oil?

The technology to pull carbon out of the air and manufacture synthetic hydrocarbon fuel is nothing new. Pioneered in Germany in the 1920s, the European country produced vast quantities of synthetic kerosine for its air force in the Second World War. Meanwhile, submariners and astronauts have benefited from carbon scrubbing technology for decades.

What’s left, says Oldham, is to connect all those pieces of technology together and to do so at a planetary scale.

Carbon Engineering, for example, pumps air through fans and onto plastic surfaces that capture CO2 in a liquid solution. From there, it’s eventually turned into concentrated CO2 gas, which can be buried underground indefinitely (last year it signed a deal with Shopify to do just that) or used to create synthetic fuels.

The plan for the U.K. facility will see LanzaTech synthesize a fuel that offers over a 90 per cent reduction in greenhouse gas emissions compared to conventional fossil jet fuel.

“You have a hydrocarbon chemically identical to regular fuel, which means you can put it into your car, your private jet, your truck, your ship, and those vehicles will work exactly the way they work today, without modification,” says Oldham.

“You don’t replace every ship, plane and truck on the planet. You don’t change the infrastructure of every airport.”

To date, there are roughly 15 direct air capture plants around the world, including one built by the U.S. firm Global Thermostat and over a dozen from Climeworks, a Swiss company that sells captured CO2 to beverage companies and creates synthetic fuels for companies like Audi.

All of those plants are on an incredibly small-scale — Carbon Engineering’s research and development plant in Squamish only sucks about a tonne of carbon out of the air every year.

If the Canadian company has its way, that will soon change.

A BREAK FOR BIG OIL?

Carbon Engineering is looking beyond producing jet fuel in the U.K. Oldham says the company is finalizing plans to build a plant at an undisclosed site, either in west Texas or southeastern New Mexico, with 1PointFive. It would remove up to a million tonnes of atmospheric CO2 per year, he says.

The facility would dwarf all other direct air capture plants on the planet, and every year would be able to remove the same amount of CO2 that the average Boeing passenger jet belches out over its 20-year lifetime.

Oldham says it’s not a coincidence the Texas/New Mexico plant — expected to begin construction next year — is being built in the Permian Basin, a region littered with old oil wells.

In order to drive down the cost of direct carbon capture, part of CE’s business plan is to use the carbon it scrubs from the atmosphere for enhanced oil recovery. That’s when CO2 is pumped into old wells, freeing up previously unreachable reserves (i.e. more oil is flushed out).

Oldham says he sees an even bigger opportunity in places like Alberta and Saskatchewan, where an oil and gas industry could transition from taking carbon out of the ground to putting it back.

“If we can decarbonize the carbon footprint of a fossil fuel completely," says Oldham, “is it a bad thing that we continue to use that fossil fuel for a period of time while figuring out how to invent an electric plane?”

For many critics, the answer is an unequivocal ‘yes.’ Direct air capture, they say, is a massively expensive distraction, one that gives big oil companies an excuse to keep burning fossil fuels.

One 2019 study found that investing in even moderately efficient renewable energy sources provided a better energy return than trying to capture carbon from the flues of fossil fuel power stations.

“For federal funding, or provincial funding, it’s a zero-sum game. And we know we’re not putting nearly enough funds into the proven solutions that will do the lion's share of the emissions reductions in the next decade: electrification, energy efficiency and renewables,” says Julia Levin, the senior climate and energy program manager with Environmental Defence.

Levin’s organization was among 500 signatories in an open letter this month that called on U.S. and Canadian leaders to reject carbon capture as a “false solution” to fight climate change.

“Until we stop those pseudo-actions, like carbon capture and producing exotic fuels, we’re not going to get there,” says John Bennett, a former executive director of the Sierra Club of Canada and now senior policy advisor of Friends of Earth Canada, another signatory.

“It’s a massively expensive way to maintain the status quo rather than trying to find new solutions.”

Once relegated to science fiction, the idea of engineering humanity’s way out of a self-made existential crisis has gained some serious proponents in recent years, enticing everyone from investors and climate researchers to oil companies.

In February, Dutch Shell laid out a scenario where the world reins in climate change to 1.5 C of warming by 2100, all while continuing to burn oil, gas and coal to supply large amounts of the planet’s energy.

To balance the emissions ledger, the oil giant proposed planting enough trees to cover an area the size of Brazil and ramp up carbon capture technology to absorb emissions before they leave smokestacks.

Instead of fully decarbonizing, the global economy would at least partially fall back on the kind of direct air capture machines trumpeted by companies like Carbon Engineering.

The bottleneck? The whole process requires a huge amount of energy. Without a stable and cheap supply of renewable energy to power the process, the promise of creating a carbon-neutral fuel is cancelled out.

In B.C., that energy comes from hydroelectricity; for Carbon Engineering’s scaled-up plants in the U.S. and the U.K., Oldham says they’re looking at building their own massive off-grid solar and wind farms.

Oldham says he expects construction on the U.K. plant to begin as soon as 2026, and once up and running, the synthetic jet fuel would be sold at the same rate as traditional fossil fuels once government incentives were applied.

“We may be doing this in the U.K., but at the same time, we’ll be looking for a partner in Canada, a partner in the United States, France, Germany, Asia... we don’t have long to solve a very large climate problem,” he says.

Perhaps it’s not surprising that a company setting out to change the composition of Earth’s atmosphere has grand ambitions.

If the world fails to decarbonize 20 per cent of global emissions by mid-century, Oldham says it would require about 8,000 of Carbon Engineering’s yet-to-be-built Permian Basin plants to hold the planet at net zero.

“That’s not a stupid number,” he says. “That’s fewer than the number of water or electricity plants in the world.”

Once net-zero is hit — an enormous task — the plants could hypothetically go to work removing the estimated 1.5 trillion tonnes of CO2 humans have already put out into the atmosphere since 1751. 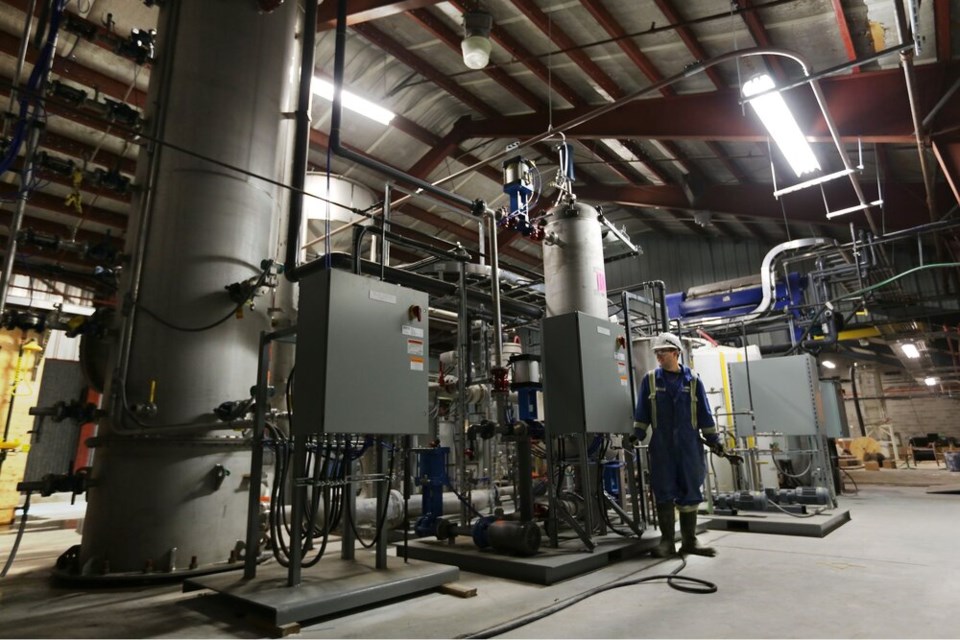 While it all might sound a little far-fetched, Carbon Engineering's ambitions in the Permian Basin and the U.K. will soon put the scaled-up technology and costs to the test. If successful, Oldham says a new plant could pop up every two years.

Jack Saddler, a researcher at UBC who leads a team investigating synthetic fuels for the International Energy Agency, says producing aviation fuel through direct air capture would be a big deal. But he’s not yet convinced it can or even should be scaled up.

He has a lot of questions — questions like, where is the green electricity going to come from? What’s it going to cost? And should we make a low-carbon jet fuel or should we power a Tesla?

IS IT TIME TO RETHINK AIR TRAVEL?

The Finnish company Neste, for example, produces jet fuel and from recycled cooking oil. The company claims its "sustainable" aviation fuel leads to an 80 per cent reduction in emissions over standard jet fuel. Already supplying Swiss Air and San Francisco International Airport, Neste plans to ramp up production to over 2.3 billion litres annually by 2023.

But even biofuels have their limits. With about a third of U.S. corn production already used to create ethanol, many have expressed concerns the production of biofuels eats into food security. The supply of atmospheric carbon, on the other hand, is virtually unlimited.

Bennett received his first briefing on climate change in 1989, a week before the Berlin Wall came down.

"I thought, 'This is how we can solve every environmental problem,'" remembers the longtime environmentalist.

At a moment where air travel has facilitated the spread of a global pandemic, now is the time to reflect on its future, says Bennett.

“It is true that air transportation is the biggest challenge of all,” says Bennett. “If we continue to allow it to grow at the rate is growing, we’ll never be able to catch up.”

"We should think about how much we rely on long-distance air travel. That’s got to be the first thing considered, not the last.”