COVID-19 infections in B.C. continue to soar, with record high 589 cases in past day

Two more people have died in the province from the virus in that has caused a global pandemic
Nov 6, 2020 4:40 PM By: Glen Korstrom 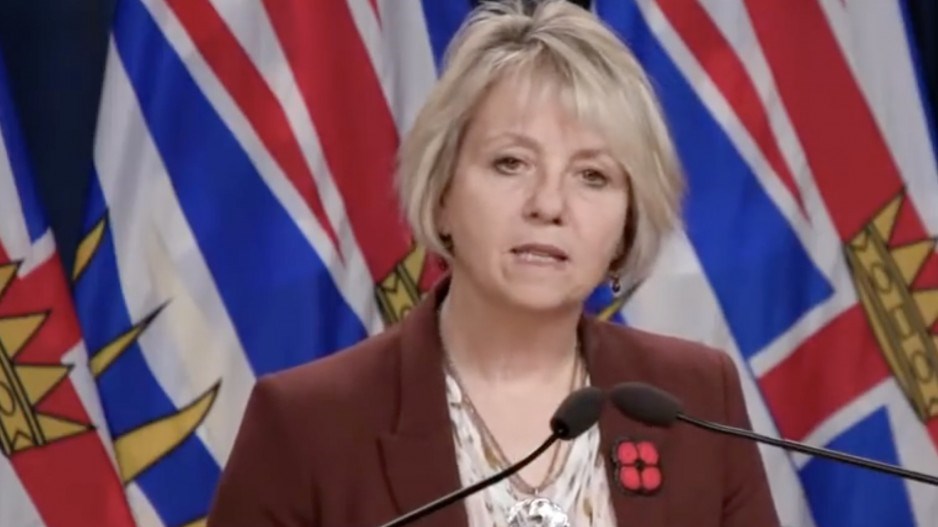 B.C. provincial health officer Bonnie Henry has been providing updates on the extent of COVID-19 in B.C. | B.C. government

B.C. continues to endure a steep trajectory in the number of newly identified COVID-19 cases, with a record high 589 cases identified in the last day, according to health officials.

This is the first time in B.C. that the number of new daily cases has exceeded 500. It also comes on the heels of yesterday, which was the first day when more than 400 cases had been detected in a 24-hour period: 425.

With 10,591 tests conducted in the past 24 hours, the positive-test rate is 5.5% – far higher than provincial health officer Bonnie Henry has said she would like to see.

The record for the number of new daily cases in B.C. has risen steadily in the past month.

The first time B.C. recorded 100 cases in a day was on Aug. 15. It then took more than nine weeks for there to be more than 200 cases recorded in a 24-hour period in B.C., as that happened Oct. 21, when BC Centre for Disease Control staff confirmed 203 cases. Three days later, on Oct. 24, the province for the first time recorded more than 300 cases in a day, as 317 infections were detected. It then took only 12 days to get to yesterday's passing of the 400-case threshold.

To contrast recent high numbers of cases with how things were four months ago, the average number of new COVID-19 infections detected each day in the province in the month of July was 23.7.

Some good news is that the number of new deaths among those infected with the virus has not kept pace with the rising number of cases and number of those actively battling infections.

The first death from COVID-19 in B.C. was announced on March 9. He was a man in his 80s, who was a resident of Lynn Valley Care Centre. Four months later, on July 9, the province had recorded a total of 186 deaths due to COVID-19. In the nearly four months since July 9, and despite a soaring number of cases, B.C. has recorded less than half that number of deaths: 89.

That total includes two new deaths in the past 24 hours. In total, 275 people have lost their lives to the virus that has caused a global pandemic.

The vast majority of the record-high 3,741 people battling active infections are self-isolating at home.

For the first time, more than 100 people are in B.C. hospitals with this virus: 104. Of those, 28 people are sick enough to be in intensive care units – more than at any time since April.

A total of 17,149 people have contracted COVID-19 since the first case was identified in B.C. in late January. More than 76% of those, or 13,035 people, have been deemed to be recovered. Given that 275 people have died, that leaves 98 people unaccounted for, with health officials telling BIV that the most likely scenario is that they left the province without alerting health officials.

"The outbreak at Fair Haven Homes Burnaby Lodge has been declared over."

Dozens of other outbreaks remain at seniors' care homes and living facilities.

Other seniors' homes with outbreaks are the Rotary Manor Dawson Creek facility in Dawson Creek, in Northern Health; and Village at Mill Creek in Kelowna, in the Interior Health region.

"There has been one new community outbreak at the Royal Inland Hospital construction site," Henry and Dix said. "There continue to be exposure events around the province."