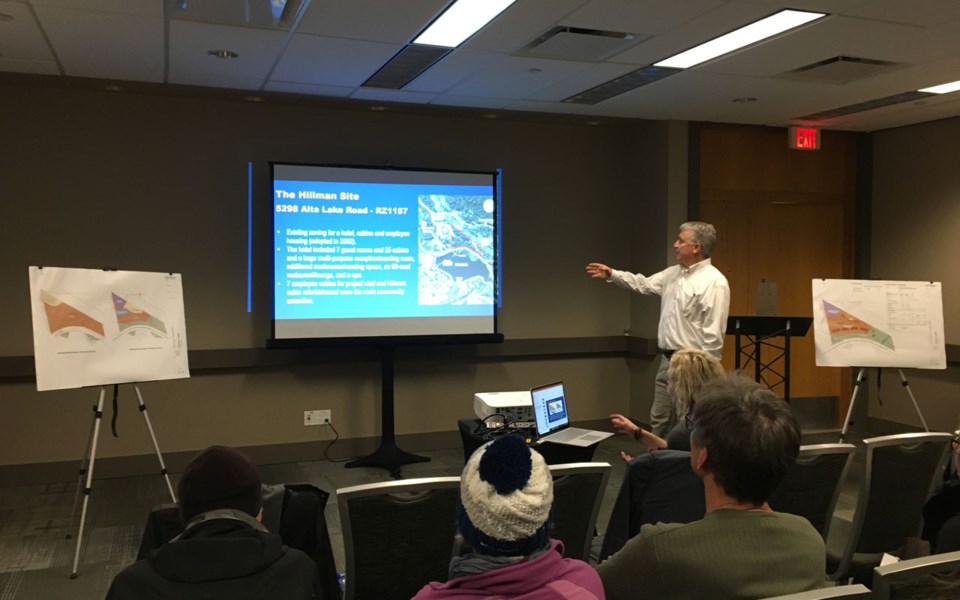 A housing proposal for 5298 Alta Lake Road is presented to the community at an open house in October 2019. File photo by Braden Dupuis

A housing proposal development for Alta Lake Road continued to inch forward this week, as opinion on the project remains divided between elected officials and some nearby residents.

The mixed-use market and employee-restricted housing development proposed for 5298 Alta Lake Rd. was back on the council agenda on Tuesday, Dec. 1 to rescind previous readings of a zoning amendment bylaw. The revision adds reference to a 20-metre building setback included as a condition of development, as well as a bylaw amending Whistler’s new Official Community Plan land-use map to include the market residential, parkland designation and protected natural area that has been negotiated through the rezoning process.

With first and second reading of the amendments now passed, the municipality will schedule a public hearing prior to third reading and is requiring the proponent to complete eight conditions of approval before that date.

But Tuesday’s meeting served mostly as a forum for council to voice its support for the proposal, and for critics to outline their opposition.

“This is a good project,” said Councillor Jen Ford. “We are getting employee housing at no cost to the municipality. It is a very desirable area. It is a lovely walk to Creekside, to transit, and this has gone through design panel, this has gone though so many eyes and I think it has been rigorous. So I’m excited to see this move forward.”

Proposed by the Michael Hutchison-led Empire Club Development Corp., the project has undergone significant changes since it was first seen by council in September 2019. Originally, the project called for 15 employee-restricted Whistler Housing Authority (WHA) units (eight of which were intended to be maintained by the proponent) and 22 market tourist-accommodation units zoned for short-term rental. But after pushback from Nita Lake residents over the project’s density, loss of forestation and potential impacts on traffic and sightlines, the proposal was revised to include 11 market tourist-accommodation units, 11 market residential units and 21 employee-restricted units. The change also upped the number of market bed units by 24, to 88, and employee bed units by 44, to 72.

As part of the approval conditions, the proponent is also required to dedicate a 0.51-hectare land parcel to the RMOW for future development, to restore the historic Hillman cabin on the site, also known as Toad Hall, to build a neighbourhood park on the site, as well as a new paved section of the Valley Trail connecting the south parcel line to the north.

But with a number of those conditions already being pre-requisites for development before Empire Club acquired the parcel, some residents feel the developer isn’t giving enough back to the community for what he’s bound to receive in return.

Nearby resident and one of Whistler’s original councillors, Garry Watson, echoed Green’s concerns, questioning the ratio of market to employee housing.

“I’ve been concerned from the very start and quite shocked by the proposal and the emphasis on market accommodation development in ratio to employee housing,” he said in the public question-and-answer period of Tuesday’s meeting. “It started out at six to one [in square footage] and through negotiations has been reduced to two to one. Traditionally on many similar projects, the ratio has never been higher than one to one.”

Watson, who holds the Freedom of the Municipality, said he has repeatedly asked the proponent for the project’s financial pro forma—which Hutchison committed to making public at an October open house, but has yet to do so—in order to clear up what he sees as possible discrepancies in the numbers.

“I’m just concerned, if there’s misinformation in that pro forma, that you’re still carrying on,” Watson said, addressing council. “Similar units have sold recently for $2.6 million. With their … proposal, you’re looking at least a $40- to $50-million market proposal and a huge potential profit to the developer and not near sufficient accommodation for employee housing.”

(To learn more about residents’ concerns around the project, visit nitalake.ca.)

The RMOW has previously stated that an independent third party reviewed the pro forma, and found it “to be reasonable.”

Coun. Ralph Forsyth threw his support behind the proposal, quick to remind what could have been developed on the site under its current zoning, which allows for a hotel and cabins that would not have been offered to the WHA waitlist.

“The applicant could have walked into city hall and got a development permit application and built his hotel,” he said. “Instead, I think the value of the land has increased. If it’s increased for the developer, fine, because it is developed tremendously for the community because we’re going to benefit with almost half—49 per cent—of the project being employee housing, plus all the amenities we will see.”

Given escalating construction costs in the pandemic, paired with the current need for restricted housing, Coun. Duane Jackson believes now is the time to consider this project.

“[F]inancing projects is still a challenge This is not something that just happens easily,” he noted. “As much as there have been a lot of initiatives in the last few years since the Mayor’s Task Force [on Resident Housing], other than the WHA … we have struggled to get there. And the cost, as we know from [Whistler Development Corp.] and WHA projects under COVID, have increased, so it only makes delivering housing harder.”