Ejection seat tangled with parachute in 2019 Snowbirds crash in the U.S.: Investigators

Snowbirds' ejection systems being looked at in May crash in Kamloops, which took the life of the team's public affairs officer, Capt. Jennifer Casey.
Jun 29, 2020 6:01 PM By: The Canadian Press 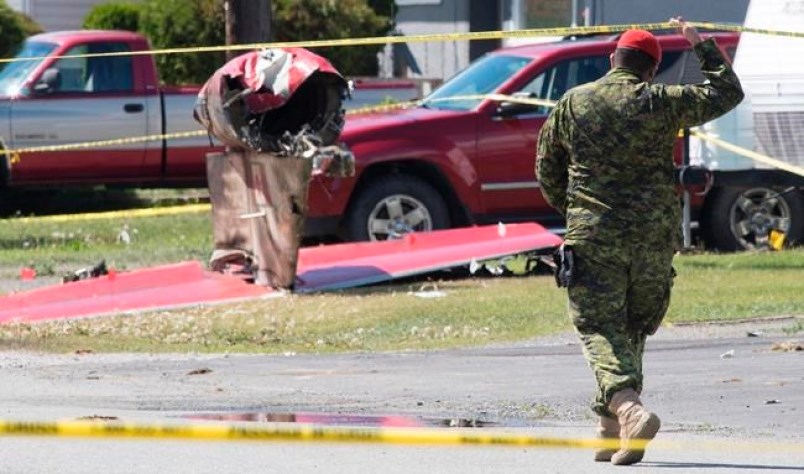 A member of the Canadian Forces walks past the tail section of a Snowbird jet in Kamloops, B.C., on May 18, 2020. A military investigation has found that the ejection seat of one of the military's iconic Snowbirds planes tangled with the pilot's parachute as he tried to escape from the aircraft before it crashed in the U.S. state of Georgia last year. The finding is contained in a report released by the Royal Canadian Air Force today and follows similar concerns about the Snowbirds' ejection seats after Capt. Jennifer Casey was killed during a different crash in British Columbia in May. THE CANADIAN PRESS/Jonathan Hayward

A military investigation has found that the ejection seat of one of the military's iconic Snowbirds planes tangled with the pilot's parachute as he tried to escape from the aircraft before it crashed last year in the U.S. state of Georgia.

The finding is contained in a summary released by the Royal Canadian Air Force on Monday and follows similar concerns about the Snowbirds' ejection systems after the team's public affairs officer, Capt. Jennifer Casey, was killed during a different crash in British Columbia in May.

Eyewitness accounts have suggested Casey's parachute did not open properly after she and Capt. Richard MacDougall ejected from their Tutor jet on May 17 shortly after takeoff from Kamloops Airport. Investigators have confirmed they are looking at the ejection seat in that crash.

The Snowbirds crash in Kamloops was the second for the military aerobatics team in less than a year after an aircraft piloted by Capt. Kevin Domon-Grenier went down in a farmer's field while en route to the Atlanta Air Show on Oct. 13. Domon-Grenier sustained minor injuries.

The summary report released Monday, June 29, said while investigators were unable to determine exactly what caused the October crash, they did find signs of previous damage that suggested a possible fuel leak.

They went on to recommend an inspection on all Tutor engines to identify similar problems in the rest of the fleet and better tracking of certain maintenance activities involving the oil cooler and fuel ports.

"The mostly likely cause of the parachute malfunction was the result of one or more parachute pack retaining cones having been released prior to the activation of the MK10B Automatic Opening Device," investigators wrote.

"Entanglement of the suspension lines with parts of the ejection seat immediately followed ultimately disrupting the proper opening of the parachute canopy."

They added the rest of the fleet was inspected to ensure the ejection systems met the military's requirements, though the summary did not provide further details.

Investigators have said they are looking into the ejection seat as they dig into last month's Snowbirds crash that killed Casey. They have suggested that based on video evidence, the crash occurred after a bird was sucked into the Tutor's engine.

The military is looking at extending the life of the Tutors, which first entered service in 1963. The project is expected to cost up to $100 million and includes updating the plane's ejection system along with its navigation, communications and avionics gear.