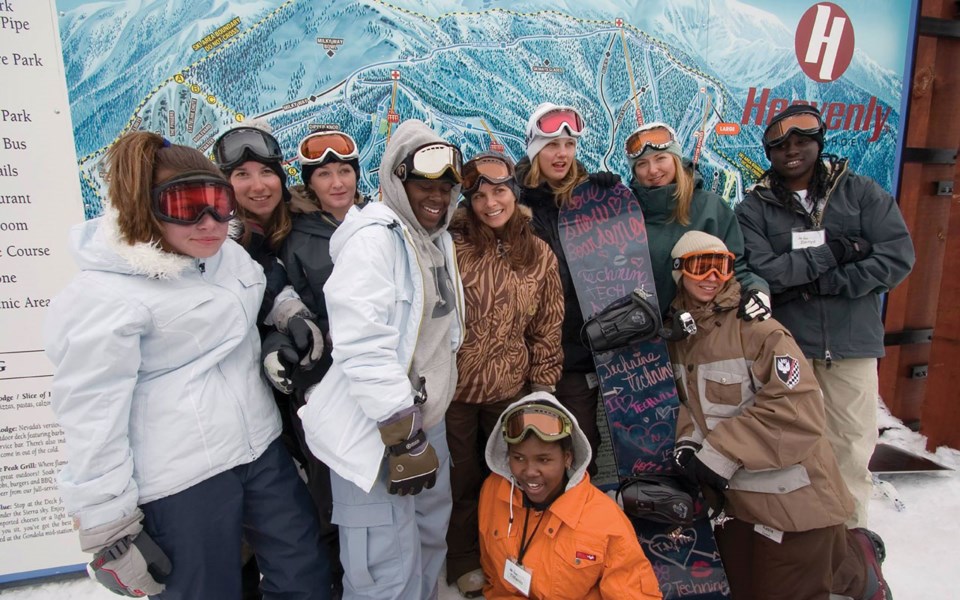 Heidi Landau, centre in brown coat, with some of the campers that took part in the Heavenly Respect Camp in Lake Tahoe, Calif. in 2006. Photo submitted

Heidi Landau was a magician of sorts.

How else to describe a firecracker of a woman with the innate ability to make something out of nothing, to pull small miracles out of thin air against all odds?

“There were lots of times when programs and funding and organization and the challenges ahead of us seemed impossible, but she always seemed to persevere and had some way of making things work and come together no matter what we were battling,” explained Lenny Rubenovitch, who worked with Landau at her non-profit action sports camp.

The founder of CampCare, a snowboard program for underprivileged youth that was held in both Whistler and Lake Tahoe, Calif. in the mid-2000s, Landau died Nov. 18 in Kalispell, MT. of COVID-19, at the age of 61, only four days after her mother, Roberta, passed from cancer, as well as complications related to COVID-19.

It was an untimely end for such a lively soul, who was described by loved ones as a selfless go-getter who made it her life’s mission to help those less fortunate.

“She was a complete fireball, sometimes a bit nutty, always giddy and laughing, grabbing your arm to gush about her camp or chat about life,” wrote friend Jen Friesen in a statement. “She was the kind of human who would drop everything to help you and she did—she helped so many people.”

Originally from Virginia, Landau spent several years after college in Tennessee as a whitewater rafting guide before exploring other parts of the country, gravitating to mountain towns like Crested Butte and Aspen, Colo.

Eventually she landed in Whistler, where she recruited close friends and young snowboarders to help run her camp.

Local Steve Andrews, who first worked at the camp in 2006, said it was Landau’s single-handed drive and determination that made the program such a success.

“We were just a bunch of snowboard bums. We were lucky to tie our shoes properly at that time. She just orchestrated everything,” he recalled.

“She had such a huge heart and she just really cared about others.”

While Landau’s Whistler camps were remembered fondly, it was The Heavenly Respect Camp in Lake Tahoe, which she organized in 2006, that left the deepest mark on those involved—both campers and counsellors alike. Hosting 35 youth from California group homes, the camp served as so much more than just an introduction to snow sports.

“Just seeing the transformation in the kids was probably the biggest thing. From fearful and quiet, keeping to themselves and just really being in their own shells, to, by the end of it, everybody was high-fiving and slapping hands,” he said.

Eventually leaving B.C. to care for her ailing father, Landau reprised the caretaker role in 2013 when her mother developed cancer, eventually moving into her Montana home. Even as her COVID-19 symptoms worsened in the days before her passing, Landau’s primary concern remained her mother. In a Nov. 10 Facebook post, Landau wrote about “the hell” she was going through worrying for her mom despite taking every possible precaution against the virus.

“This whole time I have been in isolation from Mom. Wearing a mask when wiping down surfaces and everything I touch, spraying Lysol, using air purifier, having Mom stay in her room when I am out. I never go in stores. I use grocery pickup, masked. I wash my hands constantly and [deodorize] our home, and my car, daily. Mom and I wear masks when any nurse or worker comes into our home, and they wear theirs,” she wrote.

“May we have more precious time together before she joins my Dad.”

Long-time friend Karen Drgon, who was in contact with Landau up until her final days, wants people to know that she wasn’t alone, thanks to friend Brandy Tellez, who she called “the best caregiver that could have lived on this planet.

“Heidi touched anybody she came across—forever,” Drgon added. “She just had a magical way about herself. She genuinely cared about every word that came out of her mouth that she spoke to every single person she spoke with. It was just something I’d never seen in anyone.”