Maps show how little undisturbed 'primary' and old growth forest is left around Vancouver and B.C.

Looking for some undisturbed forest in the region? Might be hard.

As many Vancouverites enjoy the beginning of spring and prepare for hikes in the woods, some may wonder what the local forest situation is like,

A conservation group based in northern B.C. has put together a pair of maps showing the extent of old-growth and primary forest left across the province, including in Metro Vancouver.

Conservation North spent years putting the maps together, which pull data from federal and provincial reports on things like agricultural land and mining, along with forestry.

One, called 'Seeing Red', marks out in different colours (including red) where human activity has disturbed forests. Disturbances can range from cities being built on the land to forest service roads cutting through the area to the land being designated for agriculture.

The map is interactive on the organization's website. If you look closely you can find small chunks of primary forest in North Vancouver. Along the Fraser Valley there aren't any large sections until Chilliwack, except for Barnston and Matsqui islands. Mount Seymour Provincial Park and the North Shore mountains are mostly green 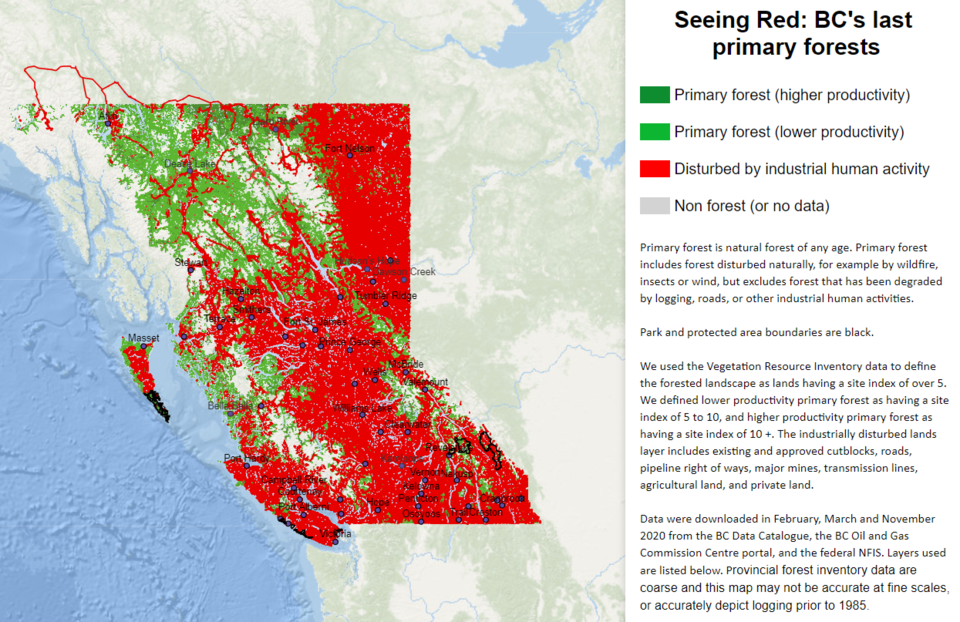 The map shows most of the province covered in red. The group states they hope it and a second map showing old-growth forests will alert British Columbians to the current impacts from humans on the forest.