‘My dog woke me up’: North Vancouver woman praises pooch for alerting her to severe townhouse fire 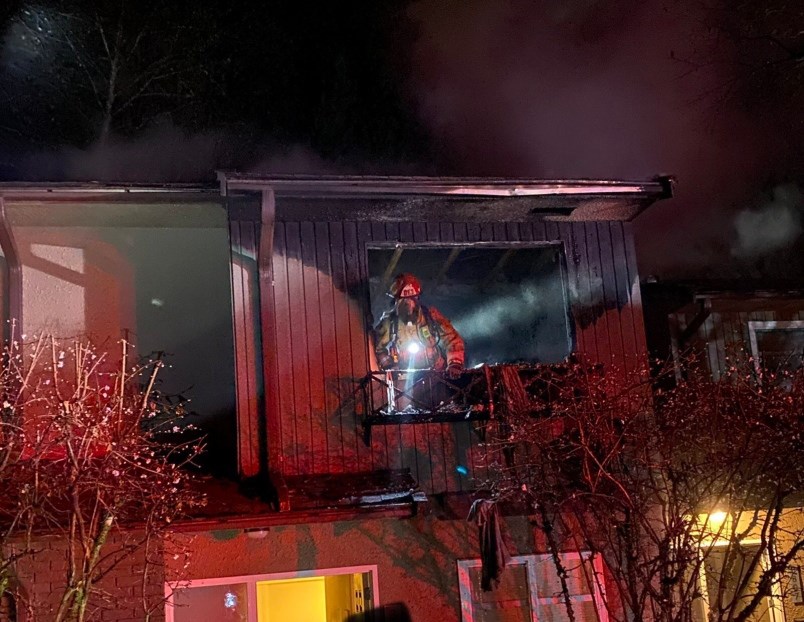 A North Vancouver woman who was forced to evacuate her home following a townhouse complex fire early Friday morning is praising her pooch for alerting her to the flame’s bursting forth from her neighbour’s unit.

Courtney Cotter, who lives in one of the townhouses on the 3800 block of Princess Avenue in the Carisbooke neighbourhood, was awoken at approximately 1:20 a.m. yesterday after hearing Moyo, her black Labrador, loudly and wildly barking at something outside.

“I thought someone was trying to break in,” recalled Cotter.

She went to the kitchen window to get a better look outside and saw vibrant orange and red colours being reflected from a car window – she looked up and saw the fire pouring out from her neighbour’s upstairs bedroom.

Cotter grabbed her cell phone, a pair of socks and Moyo’s leash before heading outside, with the alert pooch in tow, to call 911.

“I snapped into action,” she said. “I was out the door in a minute or so.”

At the same time, District of North Vancouver Fire and Rescue Services was fielding multiple calls from the area and immediately dispatched to the complex to find smoke and flames billowing out from the blown-out upstairs window of Cotter’s neighbour.

A 66-year-old man who was one of the residents of the unit was in respiratory arrest when crews arrived. He was taken to intensive care but was in stable condition. The man’s wife was taken to hospital as well to be treated for a less severe case of smoke inhalation.

In total, 20 residents had to evacuate the complex. While fire crews got the fire under control, six people from three units in the complex – including Cotter and her husband – will be displaced for an extended period.

Cotter and her husband, along with Moyo, are currently staying with Cotter’s parents. She said she was grateful that her unit didn’t catch on fire, but the extent of the smoke damage was still unknown.

“We’re going through our insurer to see what next steps are,” she said.

While the fire was severe, the outcome could have been worse, noted Cotter, who said she’s still feeling shaken up by the ordeal but her spirits were lifted by the warm reception from neighbour’s following the incident.

The cause of the fire is still under investigation, according to fire crews.

“I couldn’t even tell you what I saw,” said Cotter. “As soon as I saw flames, adrenaline kicked in. I went into survival mode.”

Following the ordeal, however, Cotter said she was sure of at least one thing.

“My smoke detectors never went off, I don’t know if it went off by the time I got out. It was my dog that woke me up,” she said. “I told my husband, we’re never not having a dog again. My dog Moyo saved my life.”

This article was originally published by the North Shore News.