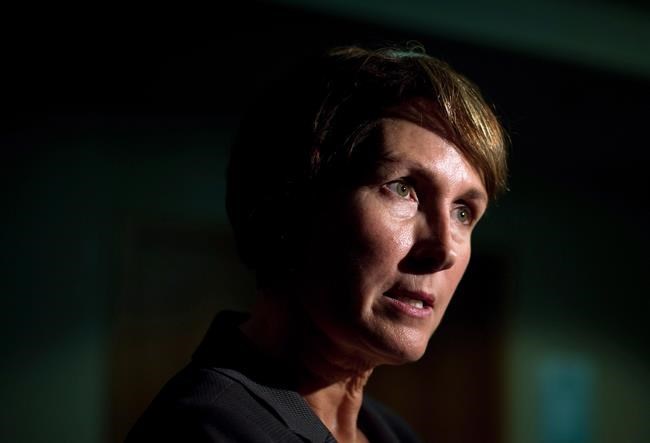 Mary Ellen Turpel-Lafond speaks to a reporter in Vancouver on November 13, 2015. The former judge says she found widespread systemic racism in British Columbia's health-care system, but she could not confirm allegations of an organized game to guess the blood-alcohol level of Indigenous patients in emergency departments. THE CANADIAN PRESS/Darryl Dyck

VICTORIA — A former judge says she found widespread systemic racism in British Columbia's health-care system, but she could not confirm allegations of an organized game to guess the blood-alcohol level of Indigenous patients in emergency departments.

Mary Ellen Turpel-Lafond said Monday she found evidence of activities that resembled the game, but none could be described as prevalent, widespread or targeting only Indigenous patients.

The former Saskatchewan provincial court judge and one-time children's advocate in B.C. was appointed by Health Minister Adrian Dix in June to investigate the allegations.

She said the review also looked into the broader context of systemic racism affecting Indigenous Peoples and found it is widespread, including extensive profiling of patients based on stereotypes about addictions.

"Indigenous people and health-care workers have spoken clearly — racism is an ugly and undeniable problem in B.C. health care that must be urgently addressed," Turpel-Lafond said in a news release.

"This report provides a blueprint for fundamental changes to beliefs, behaviours and systems that are necessary in order for us to root out racism and discrimination and ensure that the basic human rights of Indigenous people to respect, dignity and equitable health care are upheld."

She said 84 per cent of the review's Indigenous respondents reported some form of discrimination in health care and 52 per cent of Indigenous health-care workers said they experienced racial prejudice at work, mostly in the form of comments.

In a news release, Turpel-Lafond said the racism Indigenous people are exposed to has resulted in physical harm and even death.

"Many of the accounts we heard were deeply disturbing, had clearly caused significant harm, and created lasting mistrust and fear of the health-care system," she said.

Turpel-Lafond's report makes 24 recommendations. They include bringing in measures and legislation to change behaviour and the appointment of three new positions to focus on the problem, including an Indigenous health officer and an associate deputy minister of Indigenous health.

The report also says the government should work with Indigenous organizations to improve the patient complaint processes to address individual and systemic racism specifically experienced by Indigenous people, as well as create a new school of Indigenous medicine at the University of British Columbia.

When Turpel-Lafond was appointed, Premier John Horgan said there is no excuse for "dehumanizing behaviour."

"No one should worry that when they visit a hospital that they will be prejudged and given a lower standard of care."

Dix said he was made aware of the allegations involving the guessing game that led to the review the night before he went public with them on June 19.

This report by The Canadian Press was first published Monday, Nov. 30, 2020.

New relief for tourism businesses on the horizon, federal minister says
Jan 20, 2021 9:32 AM