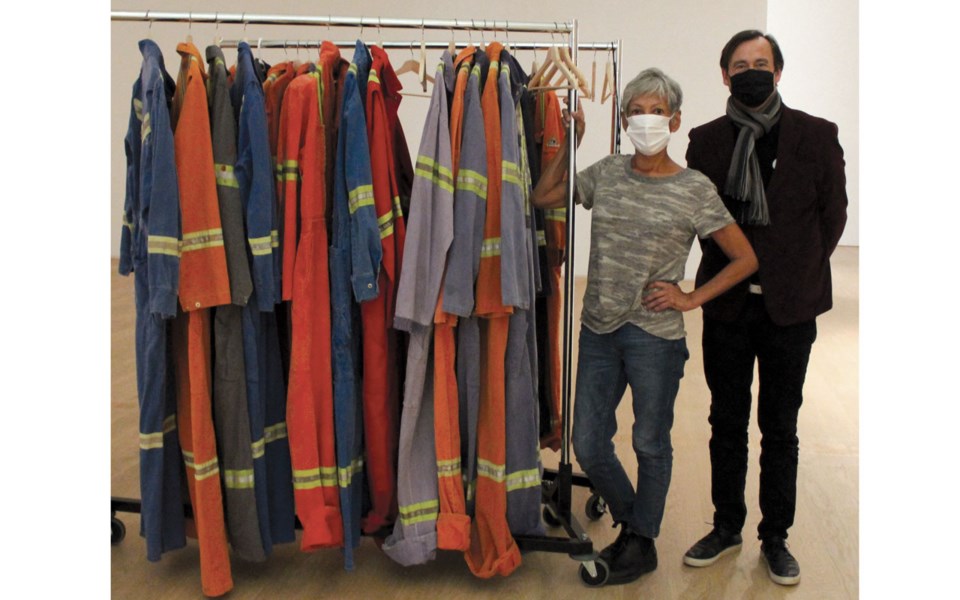 The images might be steeped in deep, poignant messages regarding the way Indigenous people in this country have been and continue to be treated, but they’re also visually stunning.

“This piece was based on a performance [Belmore] did in the Downtown Eastside in Vancouver. It was around the time that they had arrested [serial killer] Robert Pickton. It’s all about missing and murdered Indigenous women,” says Curtis Collins, director and chief curator at the museum.

He’s gesturing at a large photo, called witness, of a woman (Belmore’s sister Florene) in a long, tattered red dress with the train nailed to a post. The woman looks both artfully posed and anguished as she pulls in vain at the dress. The names of missing and murdered Indigenous women are scrawled on her arms.

“That was a live performance she did on the street with her own red dress,” Collins says. “But this, it’s a performance photograph. It’s been restaged, and instead of Rebecca, it’s Florene.”

The rest of the exhibit will similarly be filled with political and activist messages, but the mediums will range from video projections to a 2,900-pound sculpture in the shape of an overturned canoe under a tarp.

On the day Pique visited the museum, Belmore and Florene were in the midst of creating a massive piece called Force of Labour that required them to use a lift to affix a rack’s worth of coveralls to the wall.

“This is a real coup for the museum in the fact that of all the contemporary artists that we’ve shown over the course of our history, Rebecca is by far the most internationally recognized,” Collins says. “It’s a highwater mark in terms of our contemporary programming.”

Hailing from the Lac Seul First Nation, over three-and-a-half decades, Belmore has had solo exhibits everywhere from the Art Gallery of Ontario to the Banff Centre for the Arts and earned numerous awards, including the Jack and Doris Shadbolt Foundation’s VIVA Award, the Governor General’s Award in Visual and Media Arts, and the Gershon Iskowitz Prize. On top of that, she holds honourary doctorates from OCAD University, Emily Carr University of Art + Design, and NSCAD University.

For his part, Collins first met Belmore nearly 20 years ago when her work was featured in a show at the National Gallery of Canada.

“Actually, she was in my PhD dissertation,” he adds. “Two years ago, she had a major retrospective at the Art Gallery of Ontario and so I went and met with her then. We started talking about this exhibition, so it’s been a while in the making.”

Then, of course, the COVID-19 pandemic hit. That pushed the show back, but, more recently, it has impacted a live piece Belmore was set to perform on the lawn of the museum for the exhibit opening.

The 35-minute performance would have seen a limited audience outside and indoors looking through the floor-to-ceiling windows that overlook the space.

“I’m not going to give you too much other than the fact that [a] truck is in it,” Collins says.

With new restrictions from the province passed down last Saturday, Nov. 7, that performance is now pushed back to spring while plans for safe opening celebrations have been cancelled.

While some are being created specifically for the show, others are reiterations of older pieces.

Ultimately, while the work may challenge some of the viewers who visit the museum for, say, its many pleasing landscapes, it says something important and relevant.

“A lot of Rebecca’s work is socially, politically rooted; I would consider her an art activist,” Collins says. “And a lot of what she’s dealing with is disparity of wealth and she takes a very workperson-like approach to her work ... One of the driving things for her is rooted in her Anishnabai ancestry … and the fact that she thinks about these larger social-political issues and then often the turn for her is how these things affect the First Nations. There’s broader implications and more specific implications.”

(Editor's note: this story originally incorrectly identified Rebecca Belmore as Anishnabai. She is Anishinaabe. Pique apoligizes for the error.)