‘This is not something as an organization we have experienced in the past’
May 7, 2021 9:30 AM By: Brandon Barrett 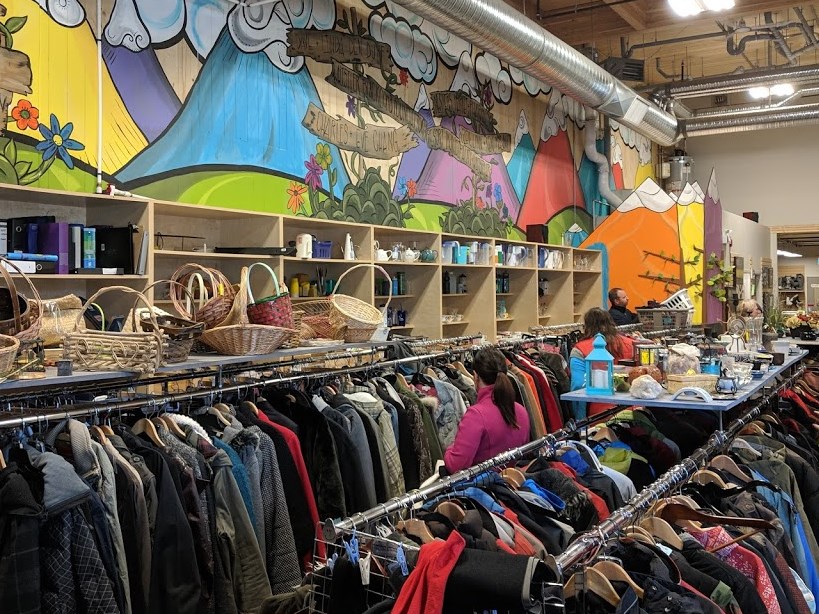 The Whistler Community Services Society says staff at both its Re-Build-It and Re-Use-it centres has been the recent target of multiple racist incidents. The Re-Use-It Centre is pictured. Greg Taylor

Staff at the Re-Use-It and Re-Build-It centres have been the target of a number of racist incidents over the past several weeks, prompting the Whistler Community Services Society (WCSS) to issue a statement it hopes will spark a wider conversation in the resort.

In a May 3 letter sent on behalf of the WCSS board, the organization said it was “saddened and deeply disappointed by several incidents of racism directed towards our staff at WCSS and members of the community,” before urging Whistlerites to stand with them against racism and intolerance.
“We, the board of WCSS, ask that you, our community, stand with us in condemning any instances of racism, hate speech, and any action that serves to denigrate, dispossess and disempower anyone who is BIPOC (Black, Indigenous People of Colour),” the letter went on. “We continue to educate ourselves on issues of race and inequality, and we ask you to do the same.”

Jackie Dickinson, executive director of WCSS, offered more details on the incidents, noting the racist comments were not relegated to just one customer, and took place over the past five or six weeks.

“It was different customers and multiple staff members, and specifically staff members of different races, and [the comments] directed at them were in regards to their accents and the way they speak,” she explained. “This is not something as an organization we have experienced in the past, to our knowledge.”

The verbal harassment prompted the issue to be brought to the WCSS board, which decided to release Monday’s statement in the hopes of initiating a community dialogue addressing intolerance and inequality, two issues that Dickinson sees as inextricably linked.

“I don’t think our experiences here are isolated. Our hope is we may see people from other local businesses speaking to their experience as well,” she said. “The pandemic has exposed inequities in our community and in society, and to me, [racism and inequality] aren’t two separate conversations.”

WCSS staff had already engaged local anti-racism and diversity consultant Anita Naidu prior to the incidents, and Dickinson is looking to make diversity training mandatory for anyone joining the organization.

In today’s current “racial flashpoint,” Naidu said her training centres around “pragmatic and realistic idealism—shifting from pageantry and performative allyship to restorative justice and measurable change.

“Right now is when organizations, companies and individuals decide what side of history they are going to be on and what future the next generation will inherit.”

Numerous organizations have reported a rise in reported cases of racism in B.C. since the onset of the pandemic, and in particular, hate towards Asian-Canadians. In February, Vancouver police said anti-Asian hate crimes spiked by more than 700 per cent in 2020.

Whistler’s hasn’t been immune either. Last May, a local Japanese family, the first to settle in the resort some 50 years ago, spoke out after a white man pedalling by on his bike along the Village Stroll reportedly yelled something to the effect of, “Chinese, go back home.” Then, in October, staff at Whistler’s First Nations museum, the Squamish Lil’wat Cultural Centre, was reportedly on the receiving end of a guest's verbal tirade that amounted to “hate speech supporting the loss of life of Indigenous people,” said executive director Heather Paul.

Despite its reputation as a relatively progressive, international hub, Whistler is “perceived as White Space, so while it’s disappointing that overt racism occurs, it’s not surprising,” said Naidu, who is of Indian descent.

“Often racist structures are upheld by the well-intentioned but misguided, who simply have no awareness of their part in upholding systemic racism. That is true of Whistler and other mountain towns that are predominantly steeped in Eurocentric culture.”

Naidu acknowledged the discomfort that regularly accompanies discussions of race, and she encourages clients to lean into the feeling.

“At the root of dismantling covert racism is White discomfort, which is at an all-time high since many people have never had to think about racial issues at such depth or for this long before or examine their role in it,” she said. “So the best thing those who are committed to fighting racism can do is be willing to get really uncomfortable, because no matter how progressive, educated and international a community deems itself to be, those insidious forms of racism will be difficult to upend until that discomfort is welcomed.”

Anyone interested in Naidu’s diversity, equity and inclusion training and programming can email her at mountainanita@gmail.com.

Whistler overdose prompts warning to community not to use drugs alone
Nov 20, 2020 9:08 PM