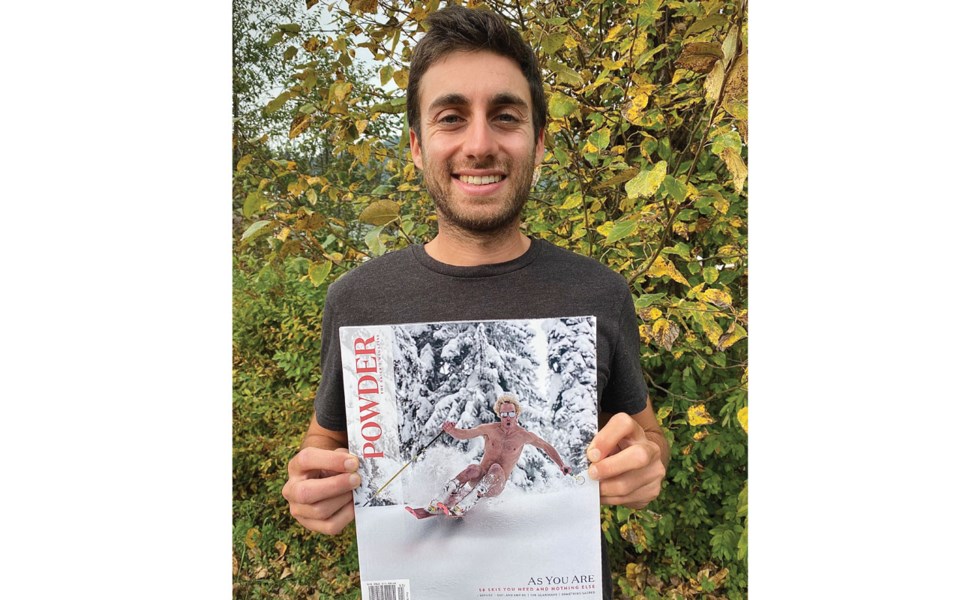 Guy Fattal holds up the Fall 2020 issue of Powder Magazine with his photo on the cover. Photo submitted

Sadly, it will also be its last with the magazine going on indefinite furlough on Nov. 20.

“To be able to get this cover, as unique as it is, kind of really makes me feel complete—or content,” Fattal says. “The thing I set out to achieve in this whole realm of outdoor skiing photography—then getting the news a few days later that Powder is shutting its doors—you really get stoked for the achievement. [Then] you find out it’s one of the final covers.”

The cover image—on the fall 2020 issue—features skier Connery Lundin in nothing but ski boots and sunglasses with his mouth agape slicing through the snow (with his bathing-suit bits strategically covered).

“A little behind-the-scenes of this is that I was skiing with a few professional athletes [at] Keefer Lake Lodge, a cat-ski operation in Interior B.C., not too far from Vernon,” Fattal says. “We were skiing for four days and, although the snow was good, we were hoping the sun would show itself.”

The sun never showed up, so on the last day of the trip, as temperatures began to warm up a little, creating a fog that limited where they could shoot, they thought, “Why not try something funny?”

“Connery Lundin has a bit of a thing for skiing naked,” Fattal adds. “His dream was to get a cover of himself skiing naked.”

He offered to strip down as a warm-up lap—with a jacket over his shoulders at the top of the run and a towel waiting at the bottom to ward off hypothermia.

“As I got ready to shoot, he passed his jacket to the guide and made a few fun turns, a few little jumps down to me,” Fattal says. “We shot two different sequences where I would go down and he would come to me. I’m pretty sure we got it right away.”

He submitted one image to Powder Magazine’s director of photography Dave Reddick. “He wrote back to me and said, ‘Have you got any other images in this sequence where he’s decent and in focus?’”

He had one other image that worked.

“That was the photo that ended up landing the cover,” he says.

Powder Magazine isn’t the only publication that’s been impacted by the pandemic, though. Other magazines have cut back budgets, gone on furlough, or folded altogether.

For his part, Fattal says he has felt the impact.

“I can speak for myself only, but I definitely am [feeling it],” he says. “Most of my work comes in the wintertime—with winter basically wrapping up in mid-March. I had a few guaranteed projects and photo shoots that [earlier this year] obviously got cancelled right away. That was a hit, but, personally, I’ve tried not to stress out too much right now.”

He is, however, noticing a lag in firmed-up shoots for brands this winter. But he’s coming up with a yet-to-be revealed plan for this unusual winter.

“I’m trying to take this time to invest in figuring out creative ways to create revenue and income, whether it be through my photography or through different avenues aside from photography,” Fattal adds. “I think there is a lot of potential with the way things have been forced to shift online even more than they were and how can I find the opportunity in that realm.”

While Fattal has spent many years as a photographer, originally from Israel, he only delved into the world of ski photography five or six years ago. He entered the Whistler photography scene with a bang in 2017 when he won the Deep Winter photo challenge (and that was following his win in 2015 at the King of Dolomites photo contest in Italy where he entered as a wildcard.)

His advice for burgeoning ski photographers in these challenging times is, essentially, to just keep up the hustle and make your goal your priority.

“It’s funny how it comes around; I somewhat have an opportunity to help and give advice,” he says. “I’d say understand if this is something you want and try and define some goals. Set some goals for yourself, whatever they are, and really turn that into one of the top priorities in your life and concentrate on it. And just keep trying, keep hustling—I really do believe in that word. Reach out to as many athletes as you can. Be a ‘yes’ man or woman. Take as much opportunity getting out there every day to try and create photography.”