EDMONTON — Alberta Premier Jason Kenney says he will be announcing Tuesday a new round of tougher health restrictions to arrest COVID-19 case rates that are the highest in Canada.
May 3, 2021 4:57 PM By: Canadian Press 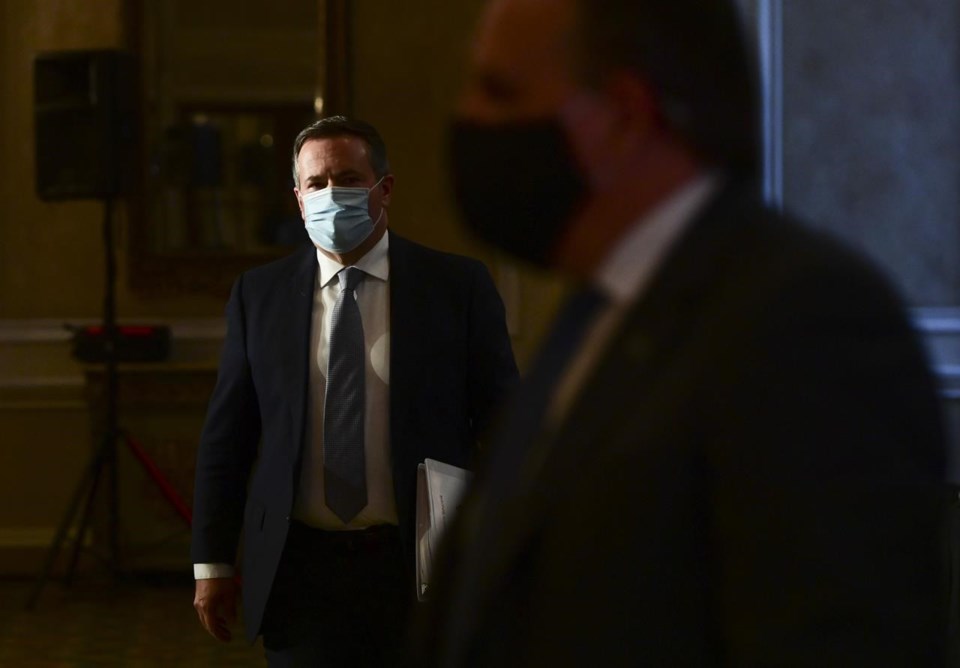 EDMONTON — Alberta Premier Jason Kenney says he will be announcing Tuesday a new round of tougher health restrictions to arrest COVID-19 case rates that are the highest in Canada.

Kenney said the impetus was a “No More Lockdowns” rodeo in central Alberta over the weekend that saw hundreds congregate without masks in open defiance of public health rules.

“I was very disturbed. Actually I was angered (by the rodeo),” Kenney said Monday.

“Given the issues we saw this weekend, and the record high cases recorded, we are developing a package of stronger public health measures which I expect to announce tomorrow.

“The next few weeks are critical.”

Alberta Health Services said in a statement that inspectors spoke with organizers before the rodeo at Bowden to notify them about public health orders. They also sent a letter indicating the event would be illegal if it were to proceed, adding, "AHS is considering our legal options in regards to the organizers of this event."

The RCMP did not respond Monday to requests for comment.

Kenney has faced demands to crack down on COVID-19 lawbreakers, but has stressed that politicians should not direct police on charges.

Opposition NDP Leader Rachel Notley agreed a legal firewall should be respected, but said there is more Kenney’s United Conservative government can do to set a tone that the rule of law must be followed and enforced.

“It is within the scope of authority of the solicitor general to issue this kind of guideline,” said Notley.

Dr. Shazma Mithani, an emergency room doctor in Edmonton, noted the rodeo had been advertised in advance but authorities still did nothing to stop it.

“It felt like a gut punch. There were thousands of people shoulder to shoulder, with no masks on, pretending like everything’s OK,” said Mithani.

The issue of rules versus enforcement has bedevilled Alberta since the pandemic began 14 months ago.

In Calgary, Mayor Naheed said he was frustrated to hear tickets given to people for breaching COVID-19 orders are being thrown out in the courts.

"I'm calling on the court system to take this as seriously as the police do,” said Nenshi.

Large groups without masks have regularly been gathering in Calgary public spaces and in violation of group limits in protest of health measures.

Nenshi said people must understand the rules aren't just guidelines, but acknowledged Kenney has in recent days given conflicting messages on restrictions.

"Even though the premier sometimes doesn't sound firm on this, this is actually the law," Nenshi said.

Kenney pushed back on suggestions he and his government have been inconsistent with their message, undercutting support for health restrictions.

About half of Kenney’s United Conservative backbench is openly against the restrictions, and critics say Kenney has been reluctant to introduce and enforce the rules to avoid angering his political base, especially in rural areas.

Alberta had 23,608 active COVID-19 cases Monday — the highest rate of infection in Canada. There were 658 people in hospital, including 154 in intensive care.

About 1.64 million Albertans have received at least one dose of vaccine.

Three weeks ago, Kenney resisted calls from the Alberta Teachers’ Association to give front-line staffers vaccine priority, saying the government will follow priorities tied to scientific evidence rather than "arbitrary pressure."

But on Monday, Kenney praised teachers as the "glue" holding the system together.

Jason Schilling, the head of the teachers association, issued a two-word statement in response: “About time.”

This report by The Canadian Press was first published May 3, 2021.

— With files from Lauren Krugel in Calgary