Anxiety gives way to elation as Trump takes off, Biden takes over as U.S. president

WASHINGTON — The battle-tested Delaware senator who took on Donald Trump took over as U.S. president Wednesday, his daunting task to heal the wounds and reverse the damage left behind by his caustic and divisive predecessor.
Jan 20, 2021 7:50 PM By: Canadian Press 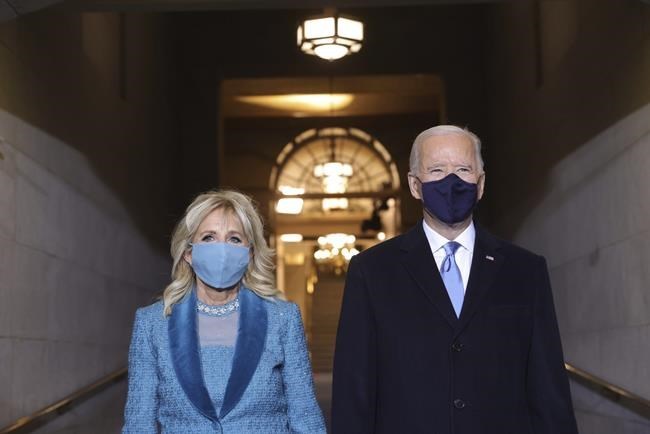 WASHINGTON — The battle-tested Delaware senator who took on Donald Trump took over as U.S. president Wednesday, his daunting task to heal the wounds and reverse the damage left behind by his caustic and divisive predecessor.

Joe Biden and Vice-President Kamala Harris, the first woman and person of colour to hold the title, took the oath of office on the very spot where Trump's own supporters tried to lay waste to Capitol Hill.

They failed, said Biden, and as a result, democracy in the United States is now more resilient than ever.

"Today, we celebrate the triumph not of a candidate, but a cause," Biden declared.

Wednesday wasn't just about ceremony. By sundown, Biden had signed a stack of executive orders, including one closely watched in Canada: cancelling the US$8-billion Keystone XL pipeline expansion.

"The United States and the world face a climate crisis. That crisis must be met with action on a scale and at a speed commensurate with the need to avoid setting the world on a dangerous, potentially catastrophic, climate trajectory."

The project, first proposed in 2008, has been bouncing around the White House in various forms of limbo — stalled throughout Barack Obama's two terms before being outright cancelled in 2015, then resurrected twice by Trump.

"While we welcome the president's commitment to fight climate change, we are disappointed but acknowledge the president's decision to fulfil his election campaign promise on Keystone XL," Prime Minister Justin Trudeau said in a statement.

"I expect they will certainly discuss the important relationship with Canada, as well as his decision on the Keystone pipeline," Psaki told the first White House briefing of the Biden era.

"The Biden-Harris administration has previewed plans to rescind the permit for the Keystone XL pipeline with the government of Canada and duly considered their case for the proposed project," Horne said.

"The decision ... restores the original 2015 decision by the Department of State reached after extensive public outreach and consultation."

In his speech, Biden described Wednesday as "democracy's day — a day of history and hope, of renewal and resolve," saying the chaos of Jan. 6 has reminded Americans not to take their country for granted.

And he urged the partisan forces fanning the flames of division to focus instead on bringing Americans together.

"Politics," he said, "doesn't have to be a raging fire, destroying everything in its path."

Throughout Washington, D.C., along the edges of a strict and sprawling security perimeter, ordinary Americans emerged to be a part of a historic day at the end of a remarkable four years.

"I just felt I needed to come full circle and celebrate decency returning to the White House," said Raelyn Maxwell, who travelled from Park City, Utah, much as she did four years ago to protest Trump's election.

"I'm just happy that Americans spoke up and said, 'Enough is enough.'"

The twin dangers of COVID-19 and the risk of civil discord conspired to make Wednesday's inauguration a physically distanced, online-only spectacle.

National Guard members stood sentry at checkpoints throughout downtown and walked fenced-off perimeters, some of their ranks reassigned amid fears of an insider attack against the new president.

The old one, meanwhile, couldn't be bothered to linger.

A split-screen sendoff showed Trump departing Joint Base Andrews for a final time aboard Air Force 1, the strains of "My Way" blasting from MAGA speakers, as Biden headed off to a morning prayer service.

A group of supporters gathered beyond the security cordon outside St. Matthew's Cathedral cheered and whooped as Biden's motorcade departed the church for Capitol Hill.

"It makes you realize what we take for granted — that our democracy is usually a smooth transition, and that our security is always kind of expected," said Sue Bell, who stopped by with her dog, Mia.

"In some ways, I think we'll look back at this and shake our heads like it's a bad dream, but in other ways, I think it's really going to make us appreciate more what we have."

Gayle Smith, who worked with Biden for eight years as a National Security Council expert during Barack Obama's presidency, said the focus on respect, dignity and equality speaks to Biden's character.

"I think all Canadians can count on that again."'

COVID-19 has claimed more American lives — 400,000 so far — than did the entire Second World War, said Biden, who led a silent 10-second moment of prayer in their memory.

He evoked the Civil War, the Great Depression and the 9/11 attacks, saying the U.S. would overcome its current differences and prevail through "a dark winter" confronting the pandemic as "one nation."

"This is our historic moment," Biden said, adding: "Unity is our path forward."

It was historic as well for Harris, accompanied to the ceremony by Eugene Goodman, the Capitol police officer who was among those helping to defend the building against the attack two weeks ago.

A marching band provided the backdrop for a festive atmosphere as images of outgoing vice-president Mike Pence interacting with former U.S. presidents were broadcast worldwide. Bill Clinton, George W. Bush, Obama and their families mingled while wearing masks. Lady Gaga sang "The Star-Spangled Banner," while Jennifer Lopez offered up a stirring medley of "This Land Is Your Land" and "America The Beautiful."

Trump avoided Biden entirely. It's believed to be the first time in 152 years that a sitting president has opted to skip out on the inauguration of his successor.

This report by The Canadian Press was first published Jan. 20, 2021.

— With files from Mike Blanchfield in Ottawa

Glen Assoun agrees to compensation deal for wrongful conviction and years in prison
Mar 4, 2021 10:28 AM