VICTORIA — British Columbia's oldest residents will be able to pre-register for COVID-19 vaccinations starting in March after the most vulnerable groups have been immunized under a plan announced Friday as the premier joined health officials in urgin
Jan 22, 2021 4:02 PM By: Canadian Press 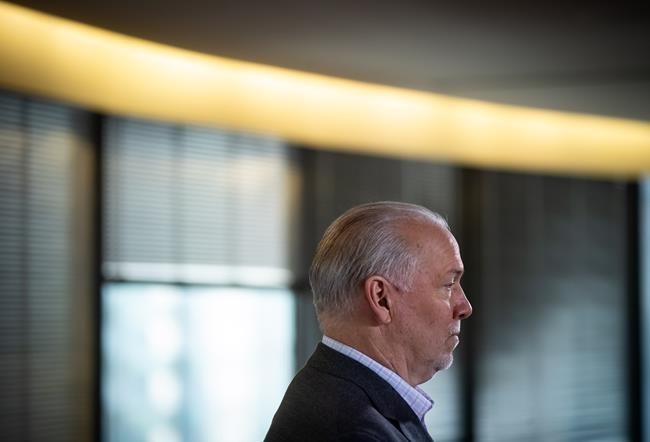 VICTORIA — British Columbia's oldest residents will be able to pre-register for COVID-19 vaccinations starting in March after the most vulnerable groups have been immunized under a plan announced Friday as the premier joined health officials in urging residents to remain committed to reducing transmission of the virus.

Premier John Horgan said "unprecedented hardship" and grief have continued a year after the first case of COVID-19 was diagnosed in Canada, though the rollout of a vaccine strategy means more than 110,000 people have been vaccinated in the province so far.

"We have a long, long way to go," he said, adding public health guidelines including wearing a mask and physical distancing must be followed while the mass vaccine campaign begins in April.

B.C. reported 508 new cases of COVID-19 on Friday and nine more deaths, pushing the death toll in the province to 1,128. There were 4,479 active infections, including 315 people in hospital.

The province is aiming to immunize 4.3 million residents aged 18 and over by the end of September.

People who register for the plan will get a reminder to book appointments when eligible, but provincial health officer Dr. Bonnie Henry said timelines for vaccination will depend on available doses of the Pfizer-BioNTech and Moderna vaccines as others are expected to be approved by the federal government.

Residents of long-term care homes, health-care workers who look after them, as well as essential visitors are among those who are currently being vaccinated. They will be followed in February and March by more residents of Indigenous communities, those who are 80 and over and Indigenous seniors over 65.

Seniors aged 75 to 79 are expected to be vaccinated starting in April as part of the pre-registration strategy that will then move on to younger people in five-year age groupings.

Those in the 70-to-74 age group will follow, along with people with severe health conditions that put them at high risk for infection.

Henry said vulnerable populations include people who have had an organ transplant, patients with specific cancers and respiratory conditions including severe asthma, and pregnant women with significant heart disease.

Second doses will be administered about 35 days later as part of the plan, which will be rolled out in 172 communities across the province.

Henry said vaccines will be given in facilities including school gyms, arenas and mobile clinics, as well as home visits for those who are unable to attend a clinic as B.C. calls on volunteers for support.

Everyone who is vaccinated will get a record of their immunization and a reminder of their second dose, about 35 days after the first shot.

While people with chronic illnesses have called for early vaccination, Henry said scientific evidence from around the world supports the province's age-based approach because older populations are at much higher risk of infection and death from COVID-19.

"We know that adults older than 60 have at least a five times increased risk of hospitalization and death compared with those less than 45 years of age and, in particular, people over 80 have double the mortality risk of even those in the 60 to 65-year age group."

The message is the same for essential workers, such as grocery-store employees, as well as police and correctional officers, Henry said, adding the approval of more vaccines may mean the province's plan could be revised to vaccinate those groups between April and June.

Youth who are 17 and under will not be vaccinated because the current vaccines have not been approved for them, she said, adding everyone who is eligible should get immunized in order to create so-called community immunity to protect as many people as possible from getting infected.

Health officials are seeking guidance from the National Advisory Committee on Immunization about whether people who have received one of the vaccines could get a different one for their second dose in case of a shortage, but that would happen only as a last resort due to lack of data on such a plan, Henry said.

Residents should put off any plans to travel internationally this summer, but trips within the province could happen, but not in the large groups that led to outbreaks in regions including the Okanagan last year, she said.

On Friday, British Columbia also announced people with ongoing COVID-19 symptoms — sometimes referred to as long haulers — will now have access to treatment at three clinics where specialists are working to understand how best to manage the condition.

Dr. Adeera Levin, lead of the new Interdisciplinary COVID-19 Care Network, said in a statement it's believed to be the only such group in Canada focusing on research to understand the long-term effects for people who have not recovered.

One of the clinics at St. Paul's Hospital in Vancouver has so far seen 160 post-COVID-19 patients after they were discharged from hospital or referred by their doctor.

— By Camille Bains in Vancouver

This report by The Canadian Press was first published Jan. 22, 2021.

Note to readers: This is a corrected story. A previous version said the first Canadian case of COVID-19 was in British Columbia.

Restrictions easing in some provinces as U.S. issues advice to those fully vaccinated
Mar 8, 2021 9:40 AM