VICTORIA — British Columbia's chief coroner says deadlier street drugs are behind another grim milestone in the province's overdose crisis as a record was set for the number of deaths in January.
Mar 2, 2021 4:14 PM By: Canadian Press 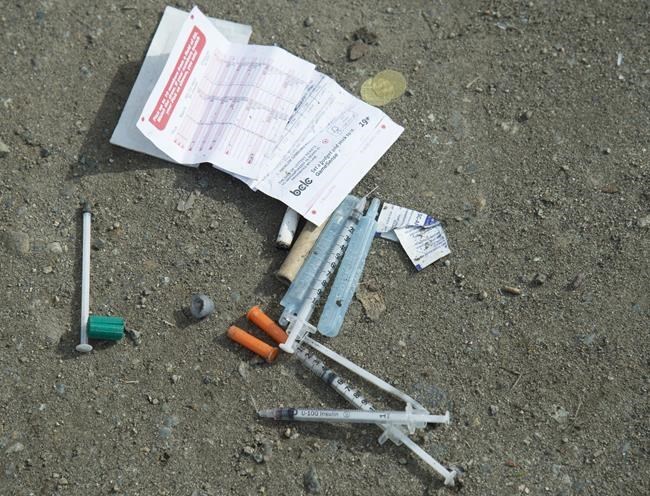 VICTORIA — British Columbia's chief coroner says deadlier street drugs are behind another grim milestone in the province's overdose crisis as a record was set for the number of deaths in January.

The BC Coroners Service says 165 people died from suspected overdoses in January, the largest number of lives lost due to illicit drugs in the first month of a calendar year.

It says the deaths come amid a rise in drug toxicity, with almost one in five of the deaths involving extreme levels of fentanyl concentration — the largest number recorded to date.

There were 14 deaths in which carfentanil was detected, the largest monthly figure involving the more lethal analogue of fentanyl since May 2019.

More people died from illicit drug overdoses in British Columbia last year than in any year before.

Chief coroner Lisa Lapointe says more than twice the number of people died in January 2021 compared with January 2020 and the drug toxicity shows a need for swift action.

"The findings suggest that the already unstable drug supply in B.C. is becoming even deadlier, underscoring the urgent need for supervised consumption options, prescribing for safe supply, and accessible treatment and recovery services," she says in the statement.

The report also notes recent increases in the presence of unprescribed benzodiazepines and its analogues, including etizolam.

Since July 2020, etizolam has been identified in nearly one-third of illicit drug toxicity deaths where expedited testing was performed. In January, benzodiazepines and its analogues were detected in nearly half of all samples tested.

The addition of etizolam to fentanyl increases the likelihood of overdose due to the combined respiratory depressant effects, the coroners service says.

It says increased drug toxicity was responsible for an average of 5.3 lives lost each day in January.

Premier John Horgan and Vancouver Mayor Kennedy Stewart have written letters to the federal government asking for an exemption that would allow for the decriminalization of drug possession for personal use.

The City of Vancouver says it submitted a preliminary application to Health Canada on Monday outlining a health-focused "Vancouver model" for managing substance use and saving lives.

It says in a statement its first application is based on consultation with Vancouver Coastal Health and police, and it details how the city plans to work with community organizations and people with lived experience to build on the submission.

Alvin Singh, spokesman for the mayor's office, said they wouldn't share the document because they didn't want to "jeopardize the integrity of the application."

However, he said the proposal would require police to determine if a person is in possession of drugs for personal use at the scene and no penalties or sanctions are envisioned at this stage. Instead, voluntary referrals would be made to Vancouver Coastal Health's overdose outreach team.

"However, this is preliminary thinking and much more work needs to be undertaken before a model is finalized," Singh said.

Sheila Malcolmson, the minister of mental health and addictions, says in a statement that the pandemic has pushed people further into isolation, compounding the effects of stigma that drives people to use drugs alone.

She says B.C. is working to add more treatment and recovery options, more services and supports, and to work with the federal government on decriminalization.

This report by The Canadian Press was first published March 2, 2021.