VANCOUVER — British Columbia's health minister says a judge's decision against a surgeon advocating for patients' rights to pay for private medical care highlights the significant role of the public health-care system as a cornerstone of Canada's ide
Sep 10, 2020 4:17 PM By: Canadian Press 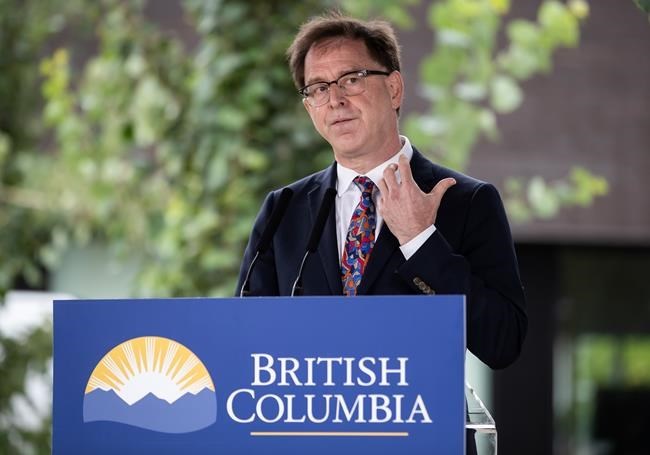 VANCOUVER — British Columbia's health minister says a judge's decision against a surgeon advocating for patients' rights to pay for private medical care highlights the significant role of the public health-care system as a cornerstone of Canada's identity.

"Our defence in the case was successful in its entirety," Adrian Dix said Thursday.

Justice John Steeves of the Supreme Court of British Columbia said in a written ruling after a four-year trial that Day and other plaintiffs failed to show patients' rights are being infringed by the act, adding its focus is on equitable access, not ability to pay.

"Equal or identical care between patients is not part of the purpose of the (Medicare Protection Act) and nor is it achievable," Steeves said, adding those who are healthier and wealthier would benefit most from a parallel health-care system.

Lawyers also failed to provide enough evidence that patients' constitutional rights are being violated, he said.

However, he noted some patients are waiting for elective surgery beyond established wait-time benchmarks because of a lack of capacity in the public system, which deteriorates their condition and reduces surgical outcomes.

Provinces have made attempts to reduce wait times in specific areas, such as cardiac and other surgical care, with the most significant development in 2003 when all the provinces affirmed Canadians should have timely access to insured health services on the basis of need, he said.

Priority codes on what are reasonable maximum wait times for a number of procedures were developed in B.C. with input from medical experts and specialists, Steeves said, adding they are intended to guide triaging to treat the sickest first.

Duplicative private health care "would not decrease wait times in the public system and there is expert evidence that wait times would actually increase," he said. "This would cause further inequitable access to timely care."

Day, 72, CEO of Cambie Surgeries Corp., argued wait times in the public system are too long and sometimes exceed those established by provinces in 2005.

"I think it's very disappointing. I think the court made a decision that's harming patients," Day said, adding he will appeal to the B.C. Court of Appeal and is prepared to take his case to the Supreme Court of Canada.

Opponents have said a two-tier system would favour "queue-jumping" patients who can afford private insurance, as well as doctors who could bill both the public and private systems.

Lawyers for both the B.C. and federal governments argued such an approach would erode Canada's universal health-care system and hurt patients with complex chronic conditions and the elderly.

In April 2018, Dix announced that starting in October of that year, doctors who bill patients extra for services covered by the Medical Services Plan could face initial fines of $10,000 as part of amendments to the Medicare Protection Act that had not been enforced for 15 years.

The new punishments were necessary because Ottawa had withheld $16 million in health transfer payments over extra billing by private clinics, Dix said.

However, Day sought and won an injunction in November 2018, when another judge stopped enforcement of parts of the act until their validity could be determined at trial.

Dix said Thursday that a decision on fines will be made after a review of the lengthy ruling.

Private clinics are not illegal, but billing for medically necessary services is a violation of the Canada Health Act.

Dix said private clinics have played a small role when they are contracted to do day surgeries and last year performed about 12,000 procedures out of 300,000 done in the public system.

"The issue here is extra billing and undermining the basis of public health care," he said.

Day launched his charter challenge in 2009 and the case ended up in the B.C. Supreme Court in 2016 with support from four patients.

He opened the Cambie Surgery Centre in 1996, saying he wanted to create more operating-room time for surgeons who couldn't get it in hospitals. However, the facility has been operating since 2003 in violation of the Medicare Protection Act.

Steeves hinted on the last day of trial in February that the long-running case would end up at the Supreme Court.

A 2005 challenge over private health insurance in Quebec ended with the top court finding the ban on private insurance violated the province's human rights charter. It did not lead to widespread privatization in Canada, though provinces set wait-time benchmarks in an effort to improve access to care.

Dr. Rupinder Brar, spokeswoman for Doctors for Medicare, an interveners at trial, said Day's position involved having doctors bill for care in both the public and private systems where they could charge more and therefore prioritize those patients.

"This court case was about me being a doctor and charging patients whatever I want, so those people who can afford it will see me and I'll see them first," Brar said.

"It sets up perverse incentives for doctors," she said, noting physicians are free to opt out of the public system if they choose to practise in private clinics, but not do both.

The head of the Canadian Medical Association, which Day led in 2006, agreed with Steeves' ruling that patients should have timely and equitable access to care not based on how much money they have.

Dr. Ann Collins said the decade-long legal battle highlights the funding challenges of the health-care system, now exacerbated by COVID-19, including care of the aging population.

"While we recognize that today's decision is an important moment in the history of our publicly funded health-care system, it should represent an opportunity to reflect on what the future of our health-care system can and should be for all Canadians."

This report by The Canadian Press was first published Sept. 10, 2020.