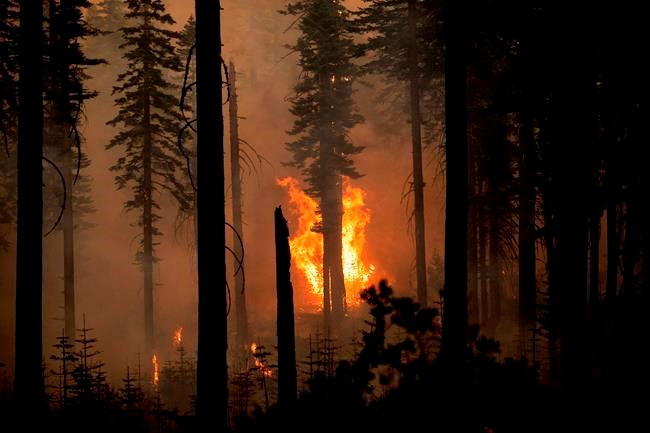 WASHINGTON, Wash. — Canada is sending nearly 300 firefighters and technical specialists to help beat back the flames ravaging Oregon, one of three states where wildfires are razing buildings, claiming lives and chasing residents from their homes along the U.S. West Coast.

Some 230 firefighters, most from British Columbia but including a number from Alberta, will be deployed on Friday, said Edwin Gillis, fire centre manager with the Winnipeg-based Canadian Interagency Forest Fire Centre.

They will be joining between 40 to 50 "overhead personnel" ⏤ supervisors, specialists and technical experts ⏤ from Ontario, Manitoba, B.C. and Alberta who are leaving on Thursday, Gillis said.

No other added resources are currently planned, but there may be other deployments depending on any specific arrangements that exist between states and the provinces, he added.

"The request received from the U.S. National Interagency Co-ordination Center was for assistance on federal land in northern California and Oregon," Gillis said.

"Some provinces in the West have border agreements with neighbouring states. We have no details as of yet of what is being sent as part of those agreements."

Alberta Wildfire tweeted Tuesday that 45 crew members would be dispatched to Oregon this week, but it wasn't clear whether they were part of the national contingent.

The 60 firefighters and three supervisors who arrived in California two weeks ago to help battle the North Complex cluster of fires have been sent home to Quebec, but only a single crew of 20 will relieve them, U.S. Forest Service officials say.

Instead, the focus has shifted one state north to Oregon, where gusting winds and low humidity Wednesday urged on blazes that have so far killed at least eight people, destroyed more than 1,000 homes and scorched more than 4,000 square kilometres.

Smoke from what officials and political leaders say is the worst wildfire season in recent memory blankets the continent, reaching as far away as Washington, D.C., and fouling air quality across southern Canada as it drifts east towards Europe.

The crisis is also taxing available resources at a time when the region's fire season is only half over and the COVID-19 pandemic has exerted unprecedented pressure on governments, agencies and families. Existing interstate and international agreements for sharing fire suppression resources are reportedly maxed out.

The crisis has also reached the presidential campaign trail: Democratic nominee Joe Biden is blaming climate change and accusing Donald Trump of ignoring the threat, while the president prefers to accuse states of failing to properly manage their forests.

Climate change was also resonating Wednesday on the other side of the country, where the slow-moving hurricane Sally made landfall in Alabama, battering the coastline with torrential rains, damaging winds and a devastating storm surge.

"The impacts of climate change are on the doorsteps everywhere, no matter where you live in the United States," said Melinda Pierce, the Sierra Club's legislative director in Washington.

That, Pierce said, is turning the environment ⏤ long an issue that was forced to take a back seat to more pressing pocketbook concerns ⏤ into an economic imperative that neither political leaders nor voters can afford to ignore.

"You are seeing historic and destructive wildfires, intense and frequent hurricanes in the Gulf, flooding in the Midwest, drought impacting farmers ⏤ there is no area of the country that isn't seeing some impact from a changing climate."

Biden seized the chance this week to take the climate-crisis fight to Trump, calling him a "climate arsonist" whose re-election would only result in worsening floods, fires and droughts across the country.

Biden has promised to spend an eye-bulging $2 trillion over the next four years on clean energy projects and efforts to stop power plants from producing planet-warming carbon emissions.

By contrast, in a briefing Monday with state officials in California, the president shrugged off efforts to convince him of the science behind climate change, saying, "I don't think science knows, actually."

Kamala Harris, Biden's vice-presidential running mate, toured what she described as the "utterly predictable" aftermath of the California fires on Tuesday in her first visit to her home state since the crisis began.

"This is not a partisan issue," Harris said, standing alongside Gov. Gavin Newsom.

"It is incumbent upon us, in terms of the leadership of our nation, to take seriously the extreme changes in our climate, and to do what we can to mitigate against the damage."

Newsom has for months been framing the situation in California, which recorded record-setting 54 C temperatures last month, as an early warning for the rest of the country and the world.

"It's snowing ashes," he said. "The hots are getting hotter, the dries are getting drier. If you don't believe in climate change, come to California."

⏤ With files from The Associated Press

The latest numbers on COVID-19 in Canada for Sept. 18
Sep 18, 2020 1:00 AM
Comments
We welcome your feedback and encourage you to share your thoughts. We ask that you be respectful of others and their points of view, refrain from personal attacks and stay on topic. To learn about our commenting policies and how we moderate, please read our Community Guidelines.