WASHINGTON, D.C. — Canada's largest private-sector unions could be among those with their hands on the helm next year when the time comes to navigate the shoals of Joe Biden's proposed Buy American rules.
Nov 20, 2020 10:14 AM By: Canadian Press 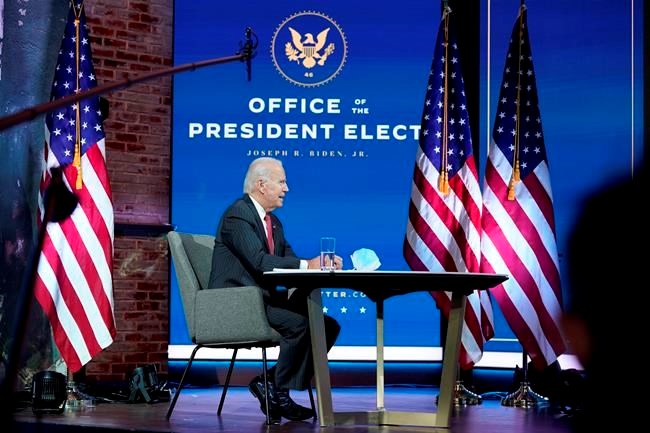 WASHINGTON, D.C. — Canada's largest private-sector unions could be among those with their hands on the helm next year when the time comes to navigate the shoals of Joe Biden's proposed Buy American rules.

The president-elect, a self-proclaimed "blue-collar Joe," makes no secret of his affinity for organized labour, or of his plan to ensure U.S. workers and companies are first in line to reap the benefits of his economic recovery plan.

"I want you know I'm a union guy. Unions are going to have increased power," Biden said he told corporate leaders during a meeting this week on his strategy for the economy.

"They just nodded. They understand. It's not anti-business. It's about economic growth, creating good-paying jobs."

That working-class solidarity could be good news for Canada, where prominent unions like the United Steelworkers and the United Food and Commercial Workers have members on both sides of the border.

"We're going to be a voice, and rightfully so," said Ken Neumann, the national director of the Canadian branch of the United Steelworkers, 225,000 of whose 850,000 North American members live and work north of the border.

"Our union has a long-standing relationship with president-elect Biden … and he knows who the Steelworkers are, so we are going to work hard to say that Canada should not be excluded."

UFCW International president Marc Perrone was among the U.S. labour leaders who took part in Tuesday's economic panel with Biden. The union boasts 1.3 million members across North America, including more than 250,000 in Canada.

"We are currently monitoring the situation and working through our international office to ensure that the views and concerns of our members — on both sides of the border — are front and centre," UFCW Canada president Paul Meinema said in a statement.

Following that meeting, Biden was jarringly clear: no government contracts will be awarded to companies that don't manufacture their products in the United States, reprising similar rules he oversaw as Barack Obama's vice-president in 2009. The United States was struggling back from the financial crisis and deep recession that followed.

Canada successfully negotiated waivers to those rules 10 years ago. It's also likely that Biden's unequivocal rhetoric is meant primarily for U.S. ears, considering the extent of domestic tensions in America's superheated postelection atmosphere.

But those tensions are real, and protectionism is now more of a force in the U.S. than it was in 2009, regardless of which party is in power, said Dan Ujczo, an Ohio lawyer who specializes in international trade.

"There's almost a universal view that whatever needs to be done has to include some type of a Buy American provision," said Ujczo, chairman of Dickinson Wright's Canada-U.S. practice group.

The narrow results of the Nov. 3 election suggest there are plenty of working-class Americans in battleground states like Pennsylvania, Michigan and Ohio who hold no strong allegiance to either party, he said.

"Those are the voters that are still up for grabs by either Democrats and Republicans, and Buy American resonates there. So to me, that is a significant difference — the tide has become even stronger for Buy American."

"I think the United States is going to head in a much better direction as it relates to the safety of the people," Dias said of the administration's incoming efforts to address the COVID-19 pandemic.

"I think it'll be a kinder, gentler nation within the confines of the United States, and frankly, I think the relationship with Canada will improve."

Indeed, COVID-19 — which has laid bare the supply-chain dependency that exists between the two countries — may offer Canada its best chance to forge closer ties, Ujczo said.

Since getting the virus under control will be Biden's top priority once he takes office, a shared approach to the production and distribution of personal protective equipment like face masks, gloves and gowns will make a lot of sense — to say nothing of the shared border, which has been closed to non-essential travel since March.

"There's the political space right now to come together and say, 'Let's look at how we create a Canada-U.S. market for PPE, for vaccination, et cetera," Ujczo said.

"If you start there, then you can say, 'We don't need Buy American for that,' and then it's an easier conversation that has to go to the next thing."

Canada, of course, has its own protectionist sentiments.

Dias, Neumann and others say Canada should be taking a page from the U.S. playbook and doing more to ensure that their Canadian members reap the benefits when taxpayer dollars are spent on infrastructure in their own country.

"It's sad to see that we have bridges in our country that are built with Chinese steel," Neumann said. "I mean, what don't we get?"

Don't assume that the end of the Trump era will automatically usher in a new era in the U.S., even after Biden takes office, warned Michael Froman, who was U.S. trade representative during Obama's second term.

"There is actually a high risk of miscalculation by our trading partners … who sort of assume that everything is going to be sweetness and light going forward," Froman told a panel discussion Wednesday.

"The issues that have been at issue between ourselves and our trading partners are very much likely to remain a focus in need of getting resolved, not swept under the carpet."

This report by The Canadian Press was first published Nov. 21, 2020.