VANCOUVER — Businesses in Vancouver's Gastown neighbourhood honoured the provincial health officer on Friday with a sneak peek at a mural exhibition featuring her image. Dr.
Jul 3, 2020 4:02 PM By: Canadian Press 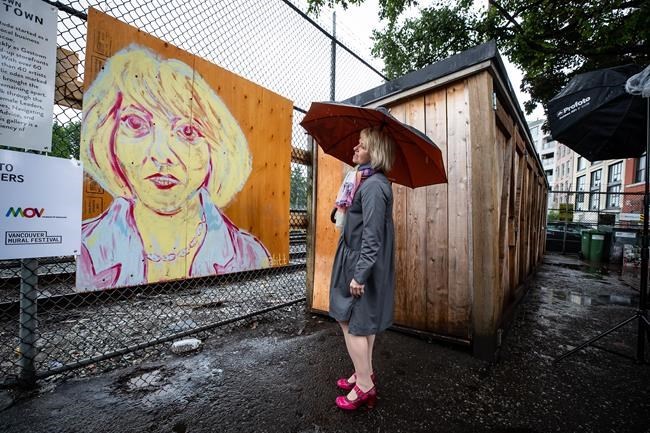 VANCOUVER — Businesses in Vancouver's Gastown neighbourhood honoured the provincial health officer on Friday with a sneak peek at a mural exhibition featuring her image.

Dr. Bonnie Henry visited the new Murals of Gratitude exhibition, which is organized in an alleyway by the area's business improvement association and opens to the public on Monday.

There's at least one portrait of Henry alongside paintings of health-care workers, said Walley Wargolet, a board member with the business improvement association.

"It really started with thanking our health-care heroes who are getting us through the pandemic," said Wargolet, who owns Dutil Denim.

About 40 local artists created more than 60 murals when businesses boarded up their storefronts after the COVID-19 pandemic forced B.C. into a state of emergency in March, he said.

"The vibrancy that we come to expect here in Gastown came back because you had all this beautiful artwork as opposed to just plywood."

As the province has eased restrictions and businesses have reopened, Wargolet said the Museum of Vancouver helped curate a selection of the murals.

They're set to be on display throughout the summer and the museum plans to keep some in its collection once the exhibition is over, he added.

While in Gastown, Henry also donned a new pair of shoes she inspired in the wake of the pandemic.

The province's top doctor has gained scores of fans for her calm demeanour during frequent media appearances, as well as her flair for colourful shoes.

The inner soles of the limited edition Fluevog shoes are stamped with a reminder from Henry to "be kind, be calm and be safe," a phrase she has repeated often.

The designer's web page for the shoe says Henry has been "an outstanding source of knowledge and reassurance during the current fight against COVID-19."

It says all profits from the sale of the shoe will support Food Banks BC.

Gastown is a hot spot for tourists and Wargolet said business has slowed while more people are staying home because of COVID-19.

But he's hopeful that new patio spaces will encourage people to visit the neighbourhood.

He said businesses, restaurants and pubs in Gastown have worked with the city to create about 500 new patio spaces that are set to open next week.

This report by The Canadian Press was first published July 3, 2020.