OTTAWA — Conservative Leader Erin O'Toole is pitching a loyalty-card style of carbon pricing where consumers would see what they pay on fuel stored into an account that can be used for green purchases later.
Apr 15, 2021 2:47 PM By: Canadian Press 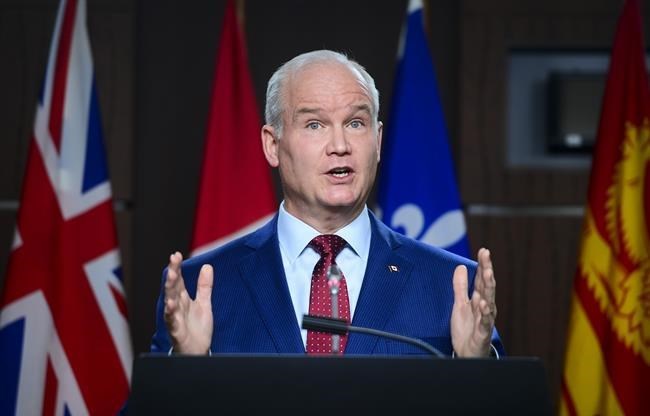 OTTAWA — Conservative Leader Erin O'Toole is pitching a loyalty-card style of carbon pricing where consumers would see what they pay on fuel stored into an account that can be used for green purchases later.

The so-called "personal low carbon savings account" is a signature policy of the party's new climate change plan, which it unveiled Thursday.

Making consumers pay a carbon price represents a major shift for the party, which has long campaigned on scrapping the program introduced by the Liberals under Prime Minister Justin Trudeau.

O'Toole emphasized his plan, presented only at a high level, would indeed rid the country of Trudeau's carbon-pricing program.

He characterized his consumer carbon price as being "a smart, market-based transparent approach to reduce emissions" to similar levels by 2030.

As leader, O'Toole promised to develop an emissions-reducing climate plan for the Conservatives ahead of the next general election, which could come soon under the current minority Parliament. His new plan also comes less than a month after delegates voted down a resolution at the Conservatives' policy convention that would have inked "climate change is real" into party policy.

Instead of rebating the estimated cost of fuel charges to residents when they file their income taxes — which is how consumer carbon pricing works under the Liberals' program — the Conservatives said under its plan, money would go into a tax-free savings account.

“Not a cent goes to Ottawa," said O'Toole.

The party said the accounts would be managed by companies similar to how a debit-card system works. The plan says it would work like other loyalty rewards programs, so that over time users would save up money to buy products that help them a "live a greener life," such as a bike or transit pass.

During a technical briefing, a Conservative official said that government would provide oversight to the program, for example, having an allowable list of items that can be purchased using the low-carbon bucks. The briefing was provided to media on the condition that those officials not be named.

The official also acknowledged the program is more targeted to those who drive than those who already bike or walk for their commute.

"I'm sure many Canadians, if they look on their smartphone or in their wallet, have many loyalty and point-systems ... this is actually less complex and very easy to administer," said O'Toole.

"This will allow Canadians to feel in charge and then if they have modest savings in their low-carbon savings account, they may take a few years to upgrade that bike if they're in a city."

Liberal Environment Minister Jonathan Wilkinson slammed the Tory proposal as a "Petro points scheme where the more you burn, the more you earn."

Stewart Elgie, a law and economics professor at the University of Ottawa, said the carbon-points system would still discourage people from using fossil fuels.

Setting it up to track the carbon purchases of millions of people would be a challenge, he said, and what products they could buy would be important because some items are not as useful at reducing emissions, like a transit pass.

"After years of carbon price wars, the partisan divide over climate policy in Canada just got a lot smaller, and that's good for our economy and our environment," said Elgie, also chairman of the Smart Prosperity Institute.

Although his climate strategy paves a way for the country to meet its international emissions targets, Elgie said it fails to mention any commitment to reach net-zero by 2050.

O'Toole said Thursday one of the selling points of his carbon price is that it's cheaper for Canadians.

The Conservatives say their consumer price would start at $20 per tonne, and rise to no higher than $50 per tonne.

The Liberal plan — applicable only in provinces that do not have their own approved carbon-pricing scheme — sets the price at $40 per tonne, rising each year until it reaches $170 per tonne by 2030.

The federal government's plan could raise prices at the pump by nearly 28 per cent over a decade, officials said in December.

O'Toole had been planning to introduce a consumer carbon price for months, prior to the recent Supreme Court of Canada's ruling that the Liberals' federal backstop was constitutional, the party said Thursday.

And while Conservatives would be prepared to increase their carbon price on industrial emitters to $170 per tonne by 2030, it would limit what consumers pay to $50.

To offset the impacts of a lower carbon price, the party would look to reduce greenhouse gas emissions through other measures, like a renewable natural gas requirement and putting more zero-emissions vehicles on the road by requiring 30 per cent of light-duty vehicles — cars, SUVs, pickup trucks — sold to be pollutant-free by 2030.

"The Conservatives are leaning more heavily on renewable fuel regulations than carbon pricing and that will reduce emissions, just at a higher cost," said Elgie.

"It's an indirect way of pricing carbon. By requiring cleaner fuels, more renewable fuels, you will raise the cost of fuels and ... that will get passed on to everyone," he said, adding the Conservatives are setting a higher standard for clean fuels than the Liberals.

Other planks include proposing lower North America-wide industrial emissions standards to the Biden administration in the United States, improving fuel regulations to make burning gasoline cleaner and investing $3 billion over 10 years in "natural climate solutions" that focus on forests, farming and wetlands.

A tax credit to incentivize use of carbon-capture technology also factors in.

"While electric vehicles are quickly growing in popularity, the truth is that the world will still be burning oil and gas for decades to come," states the Conservative plan, dubbed "Secure the Environment."

Next week, Canada is expected to announce new targets for reducing greenhouse gas emissions at a summit with United States President Joe Biden and other world leaders.

This report by The Canadian Press was first published April 15, 2021