WINNIPEG — The Manitoba government announced further restrictions as COVID-19 numbers continued to surge to near-record levels Friday. Starting Sunday morning and until May 30, the cap on outdoor gatherings will drop to five people from 10.
May 7, 2021 5:29 PM By: Canadian Press 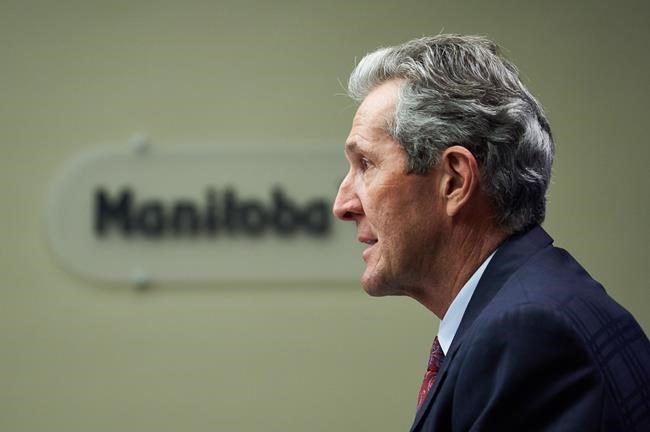 Starting Sunday morning and until May 30, the cap on outdoor gatherings will drop to five people from 10. Restaurants, bars and patios must close to in-person dining but can still provide takeout and delivery services.

Gyms, museums, art galleries and libraries will have to close and indoor religious services will be prohibited. Barbers, hair salons and estheticians will have to shut their doors.

Organized team sports will not be permitted. Dance, theatre and music schools will close. The maximum capacity at retail stores will drop to 10 per cent from 25.

"We have to take these strong actions now to protect our health-care system, to protect Manitobans."

The changes came as the province announced 502 new COVID-19 cases — the highest one-day number since the middle of the second wave of the pandemic last winter — and one death.

The number of people testing positive for the virus had risen to 9.6 per cent provincially and 11.3 per cent in Winnipeg.

Intensive care beds, which normally number 71, were expanded to 129 at the peak of the second wave and were approaching that number again Friday.

"If we sustain those high admission numbers over the next days, not even weeks, we could reach that number."

The expansion would mean diverting more staff from other areas of health care and more delays in elective surgeries, she added.

Manitoba schools remain open, but Roussin said that could change very soon as the government was "actively looking at" the possibility of moving to remote learning.

Fines for individuals that currently range from $298 to $1,296 will be doubled for a second or subsequent offence, Premier Brian Pallister said.

"There is a small selfish minority of people that aren't doing their part. And in doing so, they are putting the health of themselves and others at risk," Pallister said.

Those who refuse to pay can have their wages garnisheed and be blocked from renewing their driver's licence.

The province has also been expanding its vaccination program as more international supplies arrive.

Health officials reduced the minimum age for doses among the general population at government-run super sites and pop-up clinics to 40 from 45. Vaccines are also available to Indigenous people, certain front-line workers and people living in high-transmission areas starting at age 18.

Pallister said he was dropping a plan to have teachers and other school workers drive to North Dakota, where vaccines are plentiful, to get a shot.

The teachers union was against the idea, Pallister said, so North Dakota will instead ask the United States government for special permission to export its vaccines to Manitoba. Pallister said that will take longer than his original idea.

Pallister also announced funding for a new sick-leave program for workers affected by COVID-19. Employers can apply for up to $600 per worker for days off due to getting a vaccine, self-isolation or illness. The money is aimed at covering up to five days of leave.

The Manitoba Federation of Labour said the program was flawed because it depends on employers to apply.

"The program is voluntary, not legislated like Ontario's paid sick days program. So it will only apply to workplaces that decide to provide paid sick days," federation president Kevin Rebeck said in a statement.

This report by The Canadian Press was first published May 7, 2021.