An image linked to a COVID-19 conspiracy theory was posted to the social media pages of a company owned by a Manitoba man 35 minutes before he allegedly drove a truck through a gate at Ottawa's Rideau Hall.
Jul 3, 2020 3:07 PM By: Canadian Press 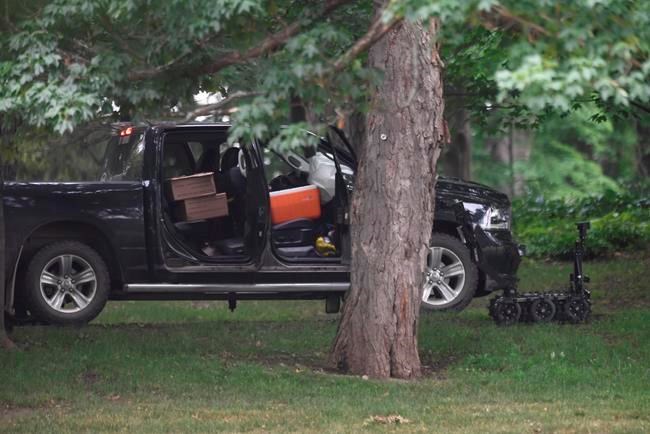 An image linked to a COVID-19 conspiracy theory was posted to the social media pages of a company owned by a Manitoba man 35 minutes before he allegedly drove a truck through a gate at Ottawa's Rideau Hall.

The photo about "Event 201" was posted on social media pages for Corey Hurren's GrindHouse Fine Foods, a company known for selling spicy sausage.

"Event 201" refers to a pandemic training exercise that has been used by conspiracy theorists about the global health crisis.

Facebook and Instagram accounts for GrindHouse also shared many recent images about COVID-19, with jokes about whether the year could get worse.

"I was quite shocked," Swan River mayor Lance Jacobson said Friday after learning 46-year-old Hurren had been arrested in Ottawa on Thursday.

Hurren appeared in court Friday afternoon on 22 charges, including possession of a restricted weapon and uttering threats.

Swan River, located 385 kilometres northwest of Winnipeg, is a small community where everyone knows everyone, Jacobson added.

Hurren moved back to the community about one year ago, said Jacobson. Online posts about Hurren say he grew up in the area.

Hurren also worked with the Swan River Patrol of the Canadian Rangers, said Jacobson. The patrol was formed in the community about two years ago, the mayor said. The community is surrounded by two forests and thick brush and the patrol helps in emergencies and with searches.

Online posts also say that as a ranger Hurren was involved in a hunt in northern Manitoba last summer for two suspected killers from British Columbia.

"I found out a few months later when I went up as one of the instructors for the Wilderness Survival course that the training area used by the Gillam Patrol was only about 10 km away from where the manhunt subjects were found, just on the other side of the highway where we went into the bush," said a GrindHouse post in January.

Social media accounts also say Hurren was a veteran of the Royal Canadian Artillery and a resume posted online on tripod.com says he served from 1997 to 2000.

The resume says Hurren worked in both Saskatchewan and Manitoba as a doorman and in bar security before he started in the meat industry in Swan River in 2005. He started his own company there in 2014.

The sausage Hurren made through GrindHouse was very popular with local snowmobilers, said Walter Pacamaniuk, reeve of the rural municipality of Mintonas-Bowsman.

He said Hurren called the area home for about 10 years before moving to Swan River. He worked at the local grocery store and seemed pleasant, Pacamaniuk added.

The reeve said he learned Hurren had been arrested in Ottawa when people called to tell him photos of the truck involved in the attack had Manitoba licence plates. Photos also showed a leather jacket with a logo for the local rodeo inside the truck.

Bill Gade, a councillor for the Municipality of Swan Valley West and owner of the local radio station, said Hurren has a wife and children in the community.

He seemed like "a nice normal guy," said Gade.

"His wife and kids woke up this morning and are facing the reality dad's not coming home for a long time," Gade said.

This report by The Canadian Press was first published July 3, 2020