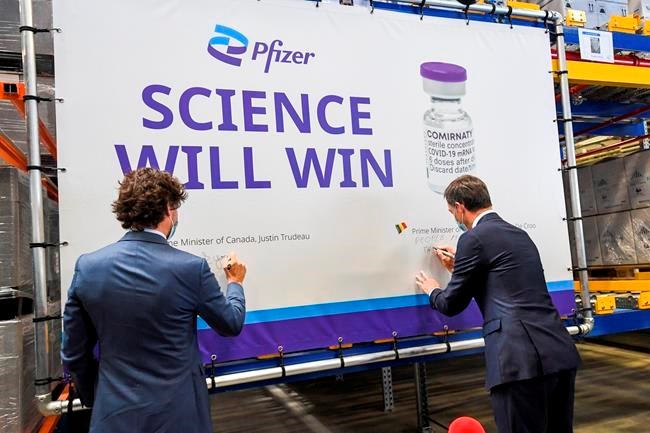 The latest news on COVID-19 developments in Canada (all times eastern):

Yukon’s acting chief medical officer of health, Dr. Catherine Elliott, says the people infected are between the ages of 10 and 40.

She says all the cases are linked to a Whitehorse contact and only one among them was recently vaccinated.

The territory now has 33 active cases.

British Columbia is reporting 108 new cases of COVID-19 as it begins the second phase of its restart plan.

There were no new deaths reported and the total number of fatalities is 1,734.

More than 76 per cent of those eligible have received a first dose of the COVID-19 vaccine while 657,491 have got their second shot.

Dr. André Corriveau, the deputy chief medical officer of health, says there are 2,804 active cases provincewide, which is the lowest since mid-October.

The province says of the new cases reported, 85 are COVID-19 variants of concern.

Of the total active cases, 2,116 are the more contagious variants.

Corriveau says there 271 people in hospital, with 68 of those patients in intensive care.

The province is also reporting 97 people in hospital, including 15 in intensive care.

The seven-day average of new COVID-19 cases in the province is 70.

This is Saskatchewan’s lowest seven-day average since Nov. 1, 2020.

Premier Blaine Higgs says New Brunswick is moving so quickly towards its vaccination goals that the province's border could be opened to the rest of Atlantic Canada before the end of the week.

Higgs also says the province could lift all of its health protection restrictions, including the wearing of masks, well before the Aug. 2 target date that the government set in May when it unveiled its reopening plan.

Eight New Brunswickers were being treated in hospital, including three in intensive care.

The five-day test positivity rate is 10.6 per cent provincially and 9.9 per cent in Winnipeg.

Health officials say three cases are in the Halifax area and are close contacts of previously reported cases, while one case is in the eastern zone, which includes Cape Breton, and is related to travel.

The province has 97 known active cases of novel coronavirus with six people in hospital, including four in intensive care.

As of Monday, 705,565 doses of COVID-19 vaccine have been administered and a total of 54,361 people have received their booster shot.

A Winnipeg church is accused of breaking COVID-19 health orders by holding an indoor graduation ceremony.

The Manitoba government has issued a court summons to Springs Church over the event last month that saw high school graduates gather indoors for a ceremony broadcast to people sitting in cars outside the church.

The church, in a statement last month, said it tried to follow the rules by having 18 students inside for a closed television shoot.

Newfoundland and Labrador says it will once again welcome Maritime visitors as of June 23.

Premier Andrew Furey announced today travellers from Nova Scotia, New Brunswick and Prince Edward Island will be permitted without having to self-isolate or get tested for COVID-19.

He says the move is possible because COVID-19 case numbers have remained low in the province, while vaccination rates are climbing steadily.

As of yesterday afternoon, there were 39 active reported COVID-19 infections in Newfoundland and Labrador, and over 71 per cent of residents aged 12 and over had received their first dose of vaccine.

The Quebec government is reporting 105 new cases of COVID-19 and six additional deaths attributed to the novel coronavirus.

Hospitalizations declined by five to 209, while the number of people in intensive care fell by four to 50.

Currently, 69.2 per cent of Quebecers have received at least one dose.

Ontario reported 296 cases of COVID-19 today and 13 more deaths from the virus.

Health Minister Christine Elliott says there are 62 new cases in Peel Region, 60 in Toronto and 45 in Waterloo Region.

The province says 433 people were hospitalized with COVID-19 as of Tuesday morning.

The province says 184,989 COVID-19 vaccine doses were administered yesterday for a total of more than 11.5 million doses.

Nova Scotia Premier Iain Rankin says his province is lifting its border restrictions and opening to the rest of Atlantic Canada on June 23.

The move means residents of New Brunswick, Prince Edward Island and Newfoundland and Labrador can travel to Nova Scotia and will not be required to self-isolate for 14 days on entering the province.

Rankin says discussions are continuing with the other Atlantic premiers on co-ordinating an opening to the rest of Canada.

He says Nova Scotia is currently on track to open to the rest of Canada no later than July 14.

Nunavut is reporting no new cases of COVID-19 today.

There are eight active cases in the territory, all in the capital city of Iqaluit.