Coach Thierry Henry simply wants his Montreal Impact squad to keep 11 players on the field for an entire game when they kick off against the New England Revolution on Wednesday.
Sep 22, 2020 4:00 PM By: Canadian Press 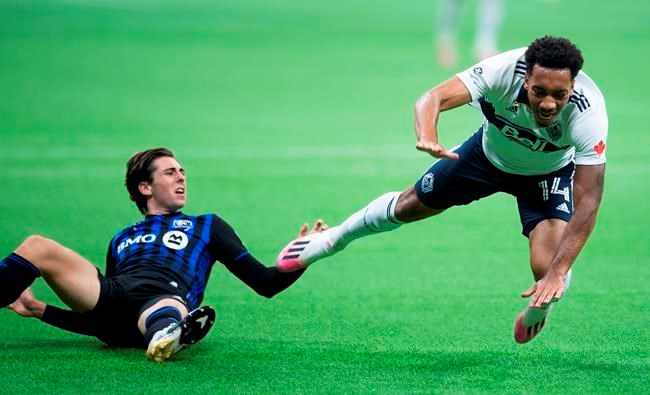 Coach Thierry Henry simply wants his Montreal Impact squad to keep 11 players on the field for an entire game when they kick off against the New England Revolution on Wednesday.

"We lost, as they say in English, our marbles," Henry told reporters Tuesday.

The most recent incident saw Romell Quioto ejected from Sunday's match in the 15th minute after he elbowed Philadelphia's Mark McKenzie in the head. Quioto had scored just five minutes before, giving Montreal an early 1-0 lead. The Impact went on to lose 4-1.

"It's a strange time because usually teams lose their minds when they're losing," Henry said. "So we talked about it — again — and it's very important that we can stay 11 men on the field. It's been addressed so many times."

Giving opponents a man advantage has contributed to a tough run of play for Montreal. Sunday marked the team's third loss in four games.

Despite the final score, Henry likes some of what he's seen from his group recently.

"I thought we played well in the last three games but we had an issue in the end because (of the red cards)," he said.

The Impact will look to rebound Wednesday when they visit the New England Revolution (3-3-6).

Montreal and New England are separated by a single point in Major League Soccer's Eastern conference, and each currently hold a playoff berth.

Facing the Revolution is nothing new for the Impact. The two clubs have met twice already this year, with Montreal capturing a 2-1 victory in February and New England taking the win at the MLS is Back tournament in July.

Coming up against the same teams again and again is unusual, but so is 2020, Henry said, adding that adversity has been "the story of the season."

"It is what it is. We have to adjust to the schedule. We know it's a weird year this year. We have to adapt to situations," he said.

The weird year has all three Canadian MLS clubs temporarily setting up "home base" in U.S. locales. The Impact are in Harrison, N.J., playing "home" games at Red Bull Arena.

"We would have wanted to be at home. But this is not possible for the reason (of COVID-19 border restrictions). It is a disadvantage, everyone knows that. It's a disadvantage for Toronto, for Vancouver," Henry said.

Having a condensed schedule where games are played every three or four days has also been a challenge, the coach added, because it limits the team's ability to work on tactics in training instead of simply focusing on recovery.

He'd prefer to have his players in their own homes, doing their normal routines and being close to their family. That sense of normality and seeing loved ones can help players recover more quickly after a game, Henry said.

"That's what we have to get rid of, being tired, sometimes even after a win," the coach said.

The MLS released the schedule for the final games of the year Tuesday, and the Impact's season isn't going to get any easier.

Montreal will play six more away games, starting with Wednesday's outing against the Revolution in New England. On Sunday, they'll face the New York Red Bulls, before visiting Columbus Crew SC on Oct. 7, the Philadelphia Union on Oct. 11, New York City FC on Oct. 24 and D.C. United on Nov. 8.

The Impact will also host five "home games" at Red Bull Arena, starting with a battle against the Chicago Fire on Oct. 3. New England will visit on Oct. 14, followed by Inter Miami CF on Oct. 17, Nashville SC on Oct. 27 and Orlando SC on Nov. 1.

SIDELINED: The Impact will be without the team's leading scorer, Romell Quioto, who's serving a red card-induced suspension. He had five goals so far this season.

HOME WOES: The Revolution have yet to win a game at Gillette Stadium this year. The squad is coming off a scoreless draw against NYC FC on Saturday.