The next week will be a balancing act for the Toronto Blue Jays as they look to close out the season strong while preparing for what will likely be a wild-card berth.
Sep 21, 2020 2:59 PM By: Canadian Press 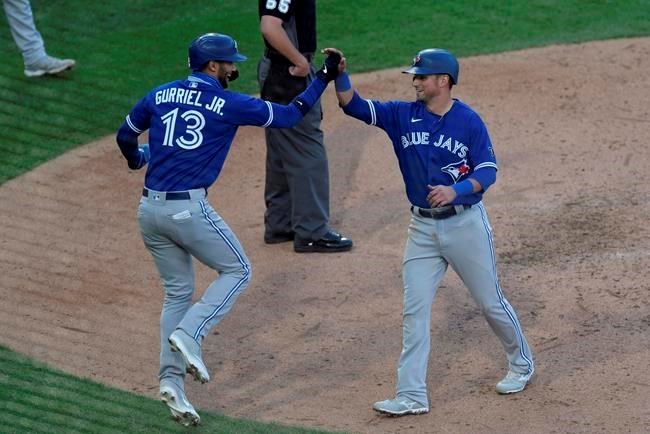 The next week will be a balancing act for the Toronto Blue Jays as they look to close out the season strong while preparing for what will likely be a wild-card berth.

With a playoff spot all but guaranteed, the Blue Jays will aim to clinch over the coming days while building toward peaking for the expanded 16-team post-season.

"So if we go out there and play as hard as we can, I like our chances."

Entering the opener of a four-game series against the New York Yankees on Monday night, the Blue Jays had a magic number of four to clinch a playoff spot. Toronto will close out the shortened 60-game campaign with a weekend series against the Baltimore Orioles.

The Blue Jays are coming off a rough week that included a six-game losing streak and the return of closer Ken Giles' elbow issues, an injury that will see him undergo season-ending Tommy John surgery.

The Yankees struggled in their first visit to Buffalo's Sahlen Field, dropping two of three to the Blue Jays earlier this month. New York rebounded in emphatic fashion last week by outscoring Toronto 43-15 in a three-game sweep at Yankee Stadium.

"We played them (well) the last time they were here," Montoyo said. "So let's do the same."

The good news for Toronto (27-26 entering Monday night) is the playoff odds are very much in their favour.

The Blue Jays will likely earn one of the two wild-card spots for a third-place divisional finish. Toronto is eighth in the AL playoff standings ahead of the Seattle Mariners (23-30), Los Angeles Angels (23-31), Orioles (23-31) and Detroit Tigers (22-30).

According to FanGraphs, the Blue Jays have a 98-per cent chance of reaching the playoffs for the first time since making their second straight American League Championship Series appearance in 2016.

With that in mind, Montoyo and pitching coach Pete Walker have to plan accordingly so pitchers aren't overworked this week and are as rested as possible for the opening wild-card round.

If the season ended Monday, Toronto would open against the top-seeded Tampa Bay Rays (35-19). The Blue Jays could still catch the No. 7 Cleveland Indians (29-24) and have a slim chance of leapfrogging the Yankees (31-22).

Under the new 2020 playoff setup, all 16 teams will play best-of-three first-round series with games to be played at the higher-seeded team's ballpark. Winners will then advance to traditional division showdowns ahead of the league championship series and the World Series.

For the Blue Jays, a team with a young core, the experience of a stretch drive and the post-season — no matter how many playoff games they play — will be valuable.

The squad was built to peak over the coming years, not necessarily this one.

With an offence anchored by breakout slugger Teoscar Hernandez and a formidable one-two starter punch in Hyun-Jin Ryu and Taijuan Walker, the Blue Jays have the potential to be a tough out in a short series.

The pitching staff that was knocked around last week will get a boost with Matt Shoemaker — a potential Game 3 starter — back from a stint on the injured list. Reliever Julian Merryweather (elbow) was added to the 10-day IL but Montoyo said slugger Rowdy Tellez (knee) and pitchers Nate Pearson (elbow) and Jordan Romano (finger) of Markham, Ont., have all been making progress.

For now though, the focus will be on aiming for consistent play against a pair of American League East division rivals. With the chance of a total collapse pegged at one in 50, this week should serve as a proper warmup for the playoffs.