Mandy Bujold would have far preferred fighting this battle within the familiar ropes of the ring.
May 5, 2021 11:47 AM By: Canadian Press 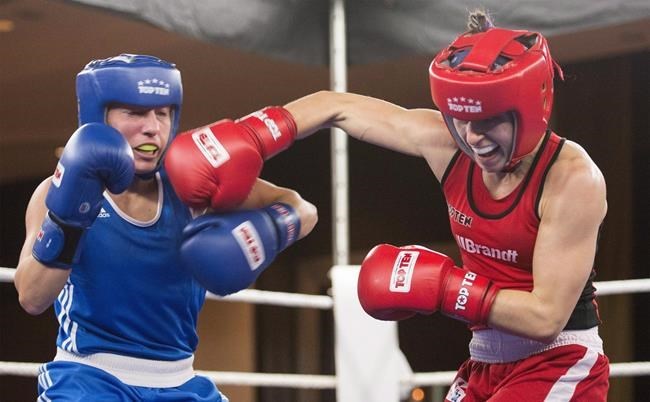 Mandy Bujold would have far preferred fighting this battle within the familiar ropes of the ring.

Instead, the Tokyo Olympic fate for Canada's best boxer lies in the hands of the Court of Arbitration for Sport after her Tokyo qualifying tournament was scrapped due to COVID-19.

Bujold and her lawyer Sylvie Rodrigue were denied their appeal to the International Olympic Committee on Tuesday, leaving the Court of Arbitration for Sport in Lausanne her last chance to box in what would be her final Games.

"I had been hopeful (about the IOC's decision)," Bujold said Wednesday morning. "But they did not even address the issues in our letter, which is really unfortunate, right?

Bujold's case, which Rodrigue planned to file before the end of day Wednesday, is about motherhood, and the timing of her maternity leave that would have been ideal without a global pandemic.

After a competitive year erased by COVID-19, the 11-time national flyweight champion had been confident she'd clinch a berth at the Olympic qualifying tournament this month in Buenos Aires, but the event was recently cancelled due to a dangerous wave of the virus in Argentina.

With no remaining international competitions for boxers from the Americas, athletes were selected on a revised ranking system using three events between 2018 and 2019 — all events Bujold didn't compete in because they conflicted with her maternity leave. Bujold's daughter Kate Olympia was born on Nov. 5, 2018.

Bujold's case is a human rights violation and discrimination case, Rodrigue said, noting it violates two particular rules of the Olympic Charter, that the IOC's role is:

— to act against any form of discrimination affecting the Olympic movement;

— to encourage and support the promotion of women in sport at all levels and in all structures with a view to implementing the principle of equality of men and women.

In the Olympic Boxing Task Force's revised ranking system for Tokyo, "It's like Mandy has never been ranked in the world," Rodrigue said.

"What we say is the fact that they do not accommodate pregnant or postpartum athletes by recognizing their rankings pre-pregnancy, they are violating the rights of the athletes from a gender equity and from a discrimination standpoint."

The 33-year-old Bujold had planned to retire after the Tokyo Games, and had already pushed back her departure for a year after the Olympics were postponed to 2021.

"I've been training for this opportunity, for this final moment to kind of close this chapter of my career, and now not even being able to have that opportunity, that's really tough," she said.

Both the Canadian Olympic Committee and Boxing Canada wrote letters in support of her appeal to the IOC, Bujold said.

The continental qualifiers were originally scheduled for last March, but were scrapped due to the pandemic.

Adding to the frustration, the European qualifying event is still happening next month in Paris. Bujold said a European boxer with an identical story — she had a baby and took maternity leave around the same time — is just one fight from punching her ticket to Tokyo.

Whatever the CAS rules, there was never a doubt Bujold would pursue this battle to the end.

"I think about when I'm preparing for a fight in the ring, I make sure that I do everything possible to give myself the opportunity to win. And, that's exactly what we're doing right now, in a different type of fight," she said.

"As much as (Tuesday) was tough to get that news, and you kind of want to just give up and just say, 'OK, well, we're fighting this giant, what are we really going to do?' that's where we have to say, 'Well, you know what? There's still options and things that we can do, we have to move forward, because that's what we said we were gonna do."

Bujold, a two-time Pan American Games champion who was previously ranked No. 2 in the Americas, would be the first Canadian woman to box in back-to-back Olympics. Her Rio Olympics ended in heartbreak due to illness; hours before her quarterfinal bout she was in hospital on an I.V.

Her goal was to close her career with a medal in Tokyo.

Now with everything in doubt, it's not easy some days to go to the gym.

"That's been probably the toughest part," Bujold said. "I've tried to get refocused this week, last week was tough, just kind of dealing with all of this in between (workouts). At the end of the day, I'm trusting Sylvie, I'm trusting her team to fight for me. So, I need to be prepared and do my part by staying ready, and staying in shape.

"So until there's a final conclusion, at the end of all of this, I need to just stay ready."

This report by The Canadian Press was first published May 5, 2021.