Darryl Sutter has 'unfinished business' in return to Calgary Flames

CALGARY — The sting of defeat still smarts for Darryl Sutter. It's been nearly 17 years since he guided the Flames to the Stanley Cup final, only to lose to the Tampa Bay Lightning in a gutting seven-game series.
Mar 5, 2021 1:40 PM By: Canadian Press 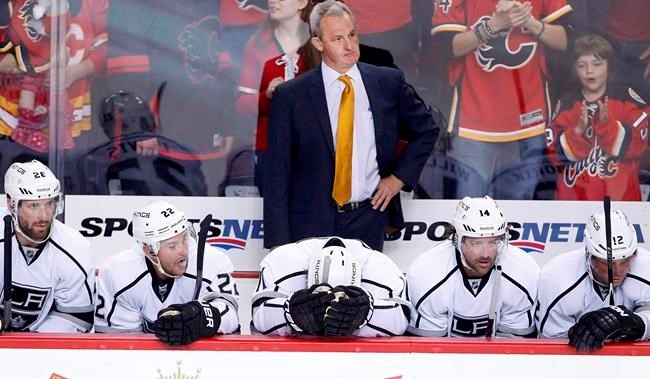 CALGARY — The sting of defeat still smarts for Darryl Sutter.

It's been nearly 17 years since he guided the Flames to the Stanley Cup final, only to lose to the Tampa Bay Lightning in a gutting seven-game series.

The result continues to guide Sutter as he returns to Calgary for a second stint as the team's head coach.

He still remembers sitting on the flight home from Florida, thinking about the loss and how it impacted everyone associated with the club, from the players up to the owners.

“It’s like I have a debt to pay to them guys. And we’re going to win a Stanley Cup for them.”

The Flames announced late Thursday night that they had fired head coach Geoff Ward and hired Sutter to replace him.

The move was necessary because the team has under-performed and been inconsistent this season, said general manager Brad Treliving.

“It’s never easy to make change, but the job is to make difficult decisions. I knew we had to make a change and there was only one guy in mind that I knew we needed to have," he said.

Treliving called Sutter "one of our game's greatest coaches," and said the team needs what he can bring after getting off to a 11-11-2 start this season.

“The clarity he provides players in terms of their roles, the expectations and the standards of the organization," he said. "And if you look back at his track record, he maximizes player performance.”

The 62-year-old from Viking, Alta., has 18 seasons of NHL coaching experience, including time with Chicago, San Jose, Calgary and Los Angeles. His overall coaching record of 634-467-101-83 ranks him 17th all-time in NHL wins.

“He just wants the best out of you. He just wants you to compete hard and work hard," Lucic said. "The daily grind is hard with Darryl because he expects a lot out of you on a daily basis. But when you get the results and you’re winning, it’s worth it at the end. And that’s what he’s all about.”

The Flames have the pieces they need to succeed, Sutter said. He likes many of the moves Treliving made in the off-season, including signing goalie Jacob Markstrom and defenceman Chris Tanev in free agency.

He views the team as a treasure map full of little red dots that need to be connected in order to go collect the bounty.

“The blueprint is there. Now you’ve got to take it and build it," he said.

Sutter is expected to join the team in Calgary on Monday after going through the league's COVID-19 protocols and wrapping up some business on his farm.

Assistant coach Ryan Huska will run the bench when the Flames face the Oilers in Edmonton on Saturday and host the Ottawa Senators on Sunday.

The new coach spoke with his players via a video call on Friday.

"The message is really clear — we’re going to get this straightened out and get the most out of everybody," Sutter said. "And everybody’s looking forward to it and excited about it.”

The team's short-term objective is to win back-to-back games this weekend, he added.

"Before you can talk about winning rounds in the playoffs, you’ve got to be a playoff team. And the way the season’s set up this year, you’ve got to play playoff hockey every night. And that’s the plan.”

The Flames sit two points back of the Montreal Canadiens in the race for the fourth and final playoff spot in the North Division. Montreal fired Claude Julien last week, replacing him with Dominique Ducharme in the only other coaching change the NHL has seen so far this season.

There's a lot of pressure on coaches in the all-Canadian division this season, Maurice said, because everyone has an opinion on how teams are run.

"This isn’t going to end. You’re two weeks away, no matter how good you think your team is playing, from being on the other end of that pressure. That’s all part of it," said the Jets coach.

"It’s not always fun to live in that environment, but it’s a key driver — I think — in why the job is a lot of fun. It’s that energy, that juice, that tension, it’s part of what we do. It’s on display now in Canada like it’s never been.”

— with files from Joshua Clipperton in Toronto.

This report by The Canadian Press was first published March 5, 2021.