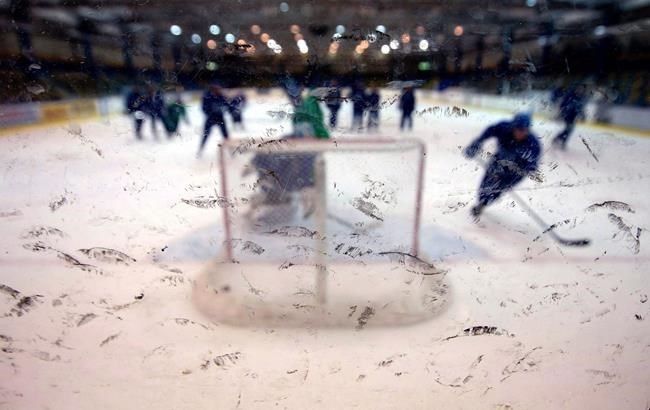 The claim was filed by Kobe Mohr, a 21-year-old Lloydminster, Alta., man who played for four teams in the Western Hockey League from 2015 to 2020.

The WHL, OHL and QMJHL operate under the umbrella of the Canadian Hockey League, which agreed on a settlement for three other class action lawsuits in May. The settlement has not been approved in court.

The more recent suit also asks for financial compensation for CHL players, but not only from the CHL.

The suit alleges the defendants participated in "an unlawful conspiracy, arrangement or agreement" to limit opportunities for Mohr and other Canadians to make a living playing pro hockey between the ages of 18 and 20.

The document claims the defendants have created a system where the overwhelming majority of players will never reach the top pro leagues, instead spending years playing for "nominal sums of money, all to the financial advantage of the defendants."

"This practice creates a system that imprisons young hockey players between 16 and 20," said lawyer Félix-Antoine Michaud, whose Quebec-based firm filed the lawsuit on Mohr's behalf.

"This arrangement is not legal under the competition act."

None of the allegations have been proven in court. The lawsuit must be certified by the courts to become a class-action. No statements of defence have been filed.

The AHL declined to comment, while a CHL spokesman said the league has not received the document.

None of the other organizations mentioned in the lawsuit immediately provided a comment.

The winger spent the majority of the 2019-20 in the Alberta Junior Hockey League, but appeared in 18 games for the Rockets and Warriors.

The suit states Mohr and players like him are not represented by players' associations and are not free to organize a group to negotiate a collective bargaining agreement for themselves.

The suit points to the structure of hockey in Europe and Russia, where pro clubs can sign young players to pro contracts and assign them to junior or reserve teams.

"Overall, Canadian-based players that are playing in major junior leagues have substantially less choices and freedom, if any, than European-based players, who have the opportunity to play in the AHL or ECHL before reaching the age of 20 and be paid a salary negotiated by a professional association," the suit states.

NHL teams pay bonus or "development" money to CHL clubs whose players are drafted, which the suit calls "unlawful arrangements" between the defendants.

"The NHL and the CHL have an agreement together saying no player can play in an affiliate league, the AHL or ECHL. The players have no rights. They have no voice under this agreement."

The trio of lawsuits the CHL settled in May were over claims CHL players are employees subject to employment legislation and were due back wages for minimum wage.

The settlements, pending court approval, amount to a total of $30 million. Class members will be compensated based on length of time — full, half or quarter seasons — in their respective leagues.

The CHL has always considered major junior players, who typically range from 16 to 20 years old, student-athletes.

Players get money for out-of-pocket expenses, equipment, billeting and travel costs while on a CHL roster.

They're also currently eligible for post-secondary scholarships, with each season spent in the league worth one year of tuition, books and compulsory fees.

The WHL, OHL and QMJHL said a combined 956 players collected $7 million in scholarships in the 2019-20 academic year.

Canadian Bianca Andreescu will not play in French Open tournament
Sep 19, 2020 3:30 PM
Windsor's T.J. (The Truth) Laramie loses UFC debut via first-round submission
Sep 19, 2020 3:26 PM
Disjointed and overrun, Man Utd slumps to loss on EPL return
Sep 19, 2020 3:22 PM
Comments
We welcome your feedback and encourage you to share your thoughts. We ask that you be respectful of others and their points of view, refrain from personal attacks and stay on topic. To learn about our commenting policies and how we moderate, please read our Community Guidelines.