NEW YORK — Thanks to Jacob Shaffelburg's first MLS goal, Toronto FC left Yankee Stadium with a point after a 1-1 draw Saturday. New York City FC was left fuming, believing the tying goal should have been called back for a foul.
May 15, 2021 2:04 PM By: Canadian Press 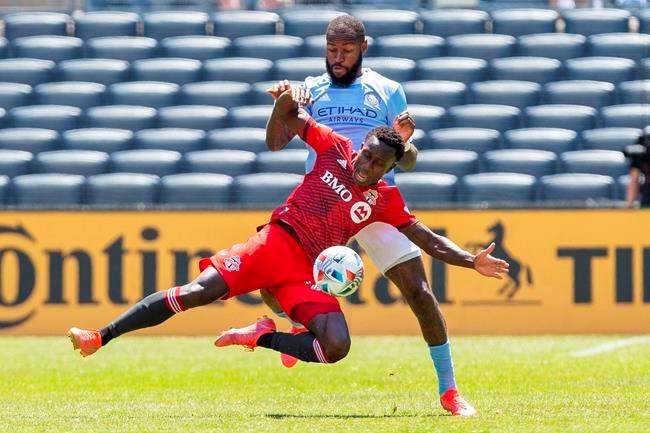 New York City FC was left fuming, believing the tying goal should have been called back for a foul.

"I think we controlled it for 90 minutes. But then, of course, we got robbed by the ref, that's for sure," said NYCFC's Norwegian coach Ronny Deila. "I can't understand it.

"One positive I have to say about him (Canadian referee David Gantar), is that he's humble, to say like 'I did a mistake.' OK, but that doesn't give us two points more."

Paraguayan Jesus Medina gave NYCFC the lead in the 53rd minute, taking advantage of an error by Toronto goalkeeper Alex Bono off a free kick.

But after going ahead, NYCFC (2-1-2) lost its way and its temper. And Toronto coach Chris Armas helped turn the tide with his substitutions.

Newly signed Dom Dwyer came off the Toronto bench in the 69th minute, quickly making a nuisance of himself in front of the New York goal. The veteran forward is like 181 pounds of sandpaper on the football pitch.

Shaffelburg, a 21-year-old from Port Williams, N.S., who came on the same time as Dwyer, beat Sean Johnson in the 74th minute with a low shot off a feed from fellow substitute Patrick Mullins to earn Toronto (1-2-2) the point.

"Instant energy," Armas said of the pacey Shaffelburg, who loves to run at defenders.

"The boys are celebrating in the locker-room. It's a big goal for him and the team," he added.

Shaffelburg, making his 17th MLS appearance since joining the TFC first team in June 2019, said the goal was a relief.

"I was kind of kept putting it on myself to get a goal and it was getting a bit much. So to get that was a breath of a fresh air and a weight off my back."

There was a wild, controversial passage of play prior to Shaffelburg's goal.

In the 70th minute, Bono's kick from the top of the box hit Medina in the back of the head and bounced back into the goal. But Gantar blew the whistle before the ball entered the goal, drawing the ire of the NYCFC camp.

The bile continued to grow as Dwyer bodied NYCFC's James Sands to the ground on the ensuing goal kick.

When the ball went back into the Toronto end, it was NYCFC called for a foul. Captain Michael Bradley's ensuing free kick led to the goal with Dwyer colliding with — and flattening — a NYCYC defender in the buildup.

"James (Sands) got run down. It was a free kick," said Deila.

"Two teams played hard. They competed the right way. They played fair," he said. "And the referee managed it in a way that keeps it under control.

"Nothing out of normal for me."

Once again this season TFC was exposed on a set piece when a Gudmundur Thorarinsson free kick handcuffed Bono. The ball hit the turf ahead of goal, kicked up and bounced off the Toronto 'keeper's face, allowing Medina to rush in and knock it home for his fourth of the season.

The free kick, from well outside the box, came after Richie Laryea took down an attacker.

"We should have won," said a frustrated Deila, whose team extended its undefeated run to four games (2-0-2).

Toronto, coming off a 2-0 midweek win over Columbus, was playing its fourth match in 12 days.

Armas made three changes from his midweek starting 11, handing a first start to fullback Kemar Lawrence. Jozy Altidore, who scored off the bench against Columbus, and Tsubasa Endoh also slotted in.

Altidore started up front alongside Ayo Akinola in a departure from Armas's previous 4-2-3-1 formation. Brazil's Auro shifted from fullback into the midfield alongside Bradley in a 4-4-2.

Toronto winger Yeferson Soteldo was the danger man in a scoreless first half, asking questions of the right side of the NYCFC defence in tandem with Lawrence.

TFC managed the only two shots on target in the first 45 minutes.

NYCFC striker Valentin (Taty) Castellanos came into the game on record scoring pace, one of just five players in league history to score a goal in each of the first four matches of the season. Former U.S. international Brian McBride holds the record with goals in the first five games of the 1998 season.

NYCFC, thanks in part to a 5-0 romp over FC Cincinnati, went into weekend play with the league's highest-scoring offence — averaging 2.25 goals a game.

This report by The Canadian Press was first published May 15, 2021.