Football has helped provide Frank Beltre with an education and an opportunity for a professional career, but it's also taught the CFL defensive lineman a harsh lesson about how unstable and unforgiving the sport can be.
May 5, 2021 10:39 AM By: Canadian Press 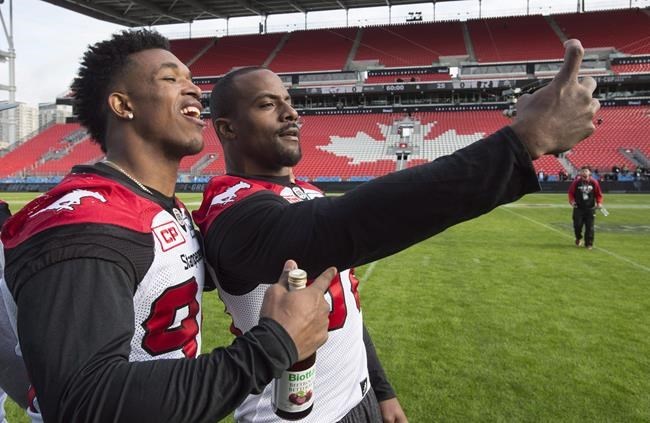 Football has helped provide Frank Beltre with an education and an opportunity for a professional career, but it's also taught the CFL defensive lineman a harsh lesson about how unstable and unforgiving the sport can be.

The six-foot-two, 250-pound Beltre began his pro career in 2013 signing with the NFL's San Diego Chargers as an undrafted free agent. Life was good, until Beltre was released four months later.

"I made myself a promise I was never going to be in that position again, I was going to have multiple streams of income no matter what."

It turned out to be an important lesson ahead of a COVID-19 pandemic that took away all professional football playing opportunities in Canada last year.

The CFL cancelled its plans last year for an abbreviated season due to the pandemic. It was expecting to return in 2021 with a full 18-game season but has pushed back the start to Aug. 5 and reduced the schedule to 14 games, pending the state of the outbreak then.

But Beltre, a native of Azua, Dominican Republic who came to the CFL in 2014, no longer relies solely upon football to make a living. Today, the 31-year-old Beltre, who lives in Florida during the off-season, also operates clothing and windows businesses, which he began in 2013 and 2018, respectively.

"Hitting rock bottom in 2013 really taught me to try and have multiple streams of income and always be ready for when football says, 'I'm done with you,'" Beltre said. "The last three years having both businesses and other streams of income, I'm playing football because I love the game.

"Yes, a contract is very important because it's my time but now it's like I miss football and I want to play football. The fact we didn't play in 2020 was very big, I missed it. I'm not ready for football to be over yet."

He returned to the NFL in 2017, signing with the New York Jets before being released just prior to the start of the regular season. Beltre returned north with the Toronto Argonauts (2017-19) and while he remains a CFL free agent, the former Towson University star said he's talking with three teams and expects to be in uniform if/when a '21 season begins.

While the global pandemic put the CFL on hold, Beltre's businesses relieved the financial pressure of not deriving football income.

"It's crazy because with this COVID situation, I guess I was scared because I didn't want my career to be done just yet," he said. "But at the same time, I wasn't financially scared because I have two other businesses that are moving.

"Actually, 2020 was my best year with the window business. We do windows for new constructions and all of these companies are building houses everywhere."

Beltre also considers himself fortunate that he's been able to bring his two sisters into his businesses. The involvement of family allowed Beltre to accept a challenge from his eight-year-old niece, Samantha, and compete on "Exatlon", a TV reality show filmed in the Dominican Republic, earlier this year.

"My niece and I are very competitive," Beltre said with a chuckle. "I'm teaching her how to play tennis and one of the things she said was, 'Well, if you want me to learn tennis, then I guess you have to try "Exatlon".

Trouble is, when the show's representatives first called, Beltre hung up.

"I thought it was probably my niece trying to play a joke with my sister," Beltre said. "Then they called me again saying it was true and they wanted me to come out and I was like, 'Oh, really.'

"My niece is very, very smart. But I like challenging her and if she challenges me, I have to go through with it."

The show pits athletes and celebrities in competition against the general public. Beltre admits he was surprised at how demanding the experience was.

"It was very challenging," he said. "I was in for a big surprise but like any other athlete, you know how to adjust and I did that and did pretty well."

But it's still not football, which remains Beltre's prime pursuit. However, he'd also welcome an opportunity to speak with players in Canada about how they could solidify their future outside of the game, even on a CFL salary.

"With COVID hitting and us missing a season, I hope that was a wake-up call to a lot of players," he said. "I just want to help provide simple knowledge, help players learn how to invest, buy stocks, anything, just to have their money work for them and not just always work for their money.

"If you're smart enough, what you make up there (in Canada), it's enough."

This report by The Canadian Press was first published May 5, 2021.