The league is no longer providing details on the players or clubs with positive tests.
Jul 6, 2020 1:51 PM By: Associated Press 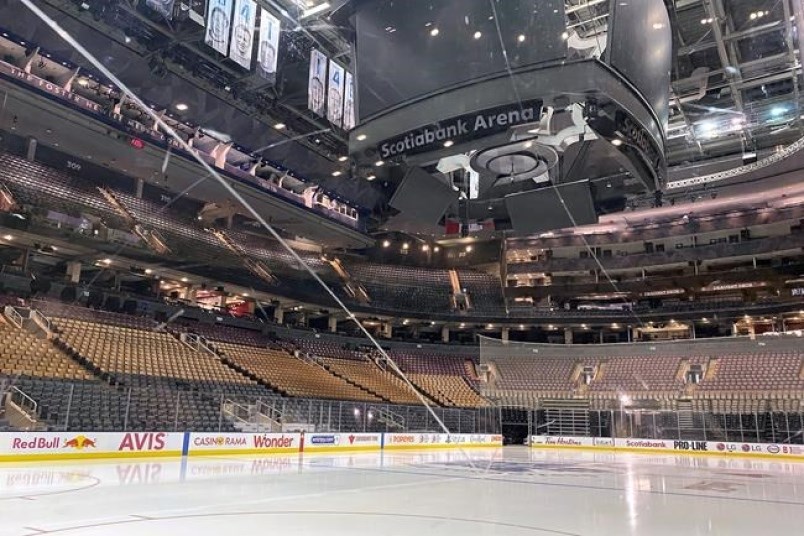 Freshly-surfaced ice at Scotiabank Arena, home of the Toronto Maple Leafs, is shown in Toronto on March 12, 2020. The NHL says 35 total players have tested positive for the novel coronavirus over roughly the past month.THE CANADIAN PRESS/Joshua Clipperton

NEW YORK — The NHL said 35 players have tested positive for the novel coronavirus over roughly the past month.

The league said 23 of 396 players checked for COVID-19 at team facilities have tested positive since voluntary Phase 2 workouts began June 8—a rate of just under six per cent. In that same time period, the NHL added it is aware of 12 additional positive test results.

That's an increase of eight players in Phase 2, and one from outside the NHL's testing system, over the last week.

The NHL said it has administered more than 2,900 tests at team facilities.

Ten additional players were confirmed to have tested positive in the spring—five from the Ottawa Senators, three from the Colorado Avalanche and one each from the Pittsburgh Penguins and Boston Bruins. That brings the total number of NHLers with confirmed positive tests to 45 since the schedule was suspended in mid-March.

The league is no longer providing details on the players or clubs with positive tests. There was no word on the health status of the 35 players in question, including whether or not they experienced symptoms or have recovered.

"All players who have tested positive have been self-isolated and are following (government) protocols," the NHL said in a statement released on Twitter.

The league and NHL Players' Association on Sunday night, July 5, agreed on protocols to start training camps and resume the season. That includes daily testing once games get under way for players, coaches and staff.

Resuming is contingent on each side approving an extension of the collective bargaining agreement and the return-to-play protocol.

—With files from The Canadian Press.

Flames defeat Jets 4-0 to win NHL qualifying series three games to one
Aug 6, 2020 11:14 PM
Thursday's Games
Aug 6, 2020 10:37 PM
Comments
We welcome your feedback and encourage you to share your thoughts. We ask that you be respectful of others and their points of view, refrain from personal attacks and stay on topic. To learn about our commenting policies and how we moderate, please read our Community Guidelines.