EDMONTON — The Tampa Bay Lightning have turned their Stanley Cup final with the Dallas Stars into a best of five because, to quote Tampa head coach Jon Cooper and paraphrase "The Untouchables," you can't bring a knife to a gunfight.
Sep 22, 2020 2:21 PM By: Canadian Press 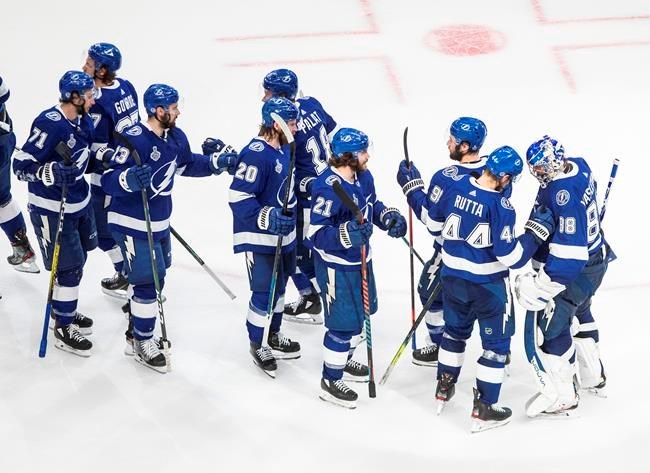 EDMONTON — The Tampa Bay Lightning have turned their Stanley Cup final with the Dallas Stars into a best of five because, to quote Tampa head coach Jon Cooper and paraphrase "The Untouchables," you can't bring a knife to a gunfight.

Cooper says his team's renewed commitment to grit and defence has been the biggest change from the high-scoring squad that won 62 games and the NHL's President's Trophy in 2019 only to get humiliated in a four-game sweep in the first round by the Columbus Blue Jackets.

"We used to be a team that (believed) it wasn't good enough to beat you 3-0, we had to beat you 9-0. And we had to change that attitude," Cooper told reporters on a Zoom call Tuesday.

"If you play that way, especially when you get to this time of year (in the playoffs), bad things are usually going to happen."

"I think experience and being humbled can help right a ship," he added. "And I truly believe (that after) last year's experience, we're seeing, I don't know how to say it, the fruits of that awful setback."

Since then, Tampa general manager Julien BriseBois has airlifted in a planeload of chapped leather and sinew.

In the summer of 2019, he signed battle-tested veterans Pat Maroon and Kevin Shattenkirk to complement existing scrappers like Ryan McDonagh, Erik Cernak and Cedric Paquette.

Coleman and Goodrow, alongside Yanni Gourde, have solidified the checking and neturalizing on the third line, giving more space for slick-for point-getters like Brayden Point and Nikita Kucherov.

Cooper said there has also been an attitude adjustment on the rest of the roster, to commit to collectively keeping the puck out of the net.

The proof of that resilience came in Game 2 Monday night. The Stars smacked and belted Kucherov all over the ice in the opening minutes only to see the slick Russian bounce back and set up two power-play goals on elite-level, seeing-eye set-up passes.

After the Stars closed the gap to 3-2 early in the third period, the Lightning shut them down, taking the play to them on the forecheck and locking down the win to tie the best-of-seven series at one game apiece.

They outhit the Stars for the second consecutive game (107-100 combined after two games).

McDonagh knocked Stars forward Blake Comeau out of the game with a clean open-ice high-speed hit late in the second period, with Comeau leaving clutching his side and now questionable for Game 3 Wednesday.

Paquette got put in a head lock by Stars uber-agitator Corey Perry. When Perry released him at the direction of the refs, Paquette turned on Perry, raining blows down on him.

Cooper, in a post-game interview, said, "You've got to stick up for yourselves and not give the other team an inch.

"You can't go into these (games) with (the plan to) bring a knife and they bring a gun. You've got to load up, too."

Dallas head coach Rick Bowness said the fact the players have been isolated in a hotel for two months between games, away from family and friends, to avoid contracting COVID-19, is causing the bad blood to boil just a little bit higher.

"When there's absolutely no change in your routine from day to day, (except) for a couple of days here or there, in eight weeks, you get a little edgy," said Bowness.

"The things you normally do to relax between games, whether it's going out for dinner with your wife, go for a drive, or going to a driving range and hit golf balls … is not there."

"When you keep taking undisciplined penalties it's going to bite you in the butt, and it did last night," he said.

Stars forward Andrew Cogliano said at this late stage it comes down to will and resolve, echoing the answer to the decisive question posed to "Untouchables" chief crimebuster Eliot Ness: What are you prepared to do?

"As you get deeper in the playoffs, the teams are so good that what separates you sometimes is whoever wants it more," said Cogliano.

AP source: Antonio Brown agrees to 1-year deal with Bucs
Oct 24, 2020 12:09 PM
Canada's Dabrowski and partner advance after walkover in semifinal of Ostrava Open
Oct 24, 2020 11:48 AM
Tyson Fury says he'll fight in London in December
Oct 24, 2020 11:03 AM
Comments
We welcome your feedback and encourage you to share your thoughts. We ask that you be respectful of others and their points of view, refrain from personal attacks and stay on topic. To learn about our commenting policies and how we moderate, please read our Community Guidelines.