Tatis goes on injured list due to health, safety protocols

DENVER (AP) — San Diego shortstop Fernando Tatis Jr. was among three players the Padres added to the injured list due to health and safety protocols.
May 11, 2021 4:27 PM By: Canadian Press 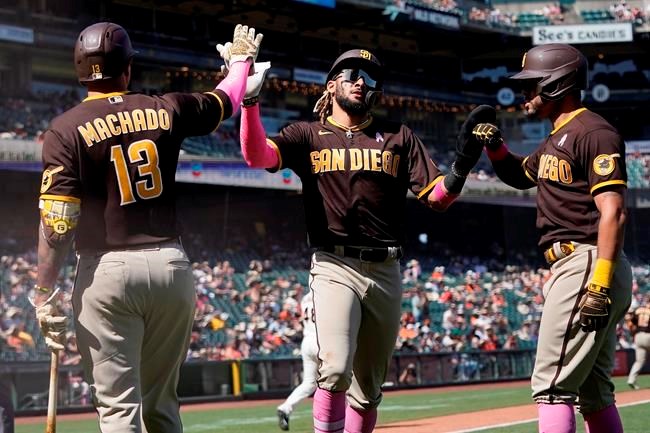 DENVER (AP) — San Diego shortstop Fernando Tatis Jr. was among three players the Padres added to the injured list due to health and safety protocols.

Joining Tatis on the list were utility players Jurickson Profar and Jorge Mateo, the Padres announced Tuesday before their game at Colorado.

Padres manager Jayce Tingler said he learned of Tatis’ positive test in a phone call late Monday nigh but that Tatis was symptom-free at the moment.

“Naturally, you’re punched in the stomach a little bit,” Tingler said. “You first of all want to make sure, certainly for Tatis in this situation, is he feeling OK? And it was good to kind of see him over Facetime, and he’s feeling well. I mean he is crushed, he’s crushed inside, mentally, things like that.

“At the same time, for our guys here, we have a chance to pick him up. We’ve got a chance to pick it up up a little bit. We’re coming off a fairly decent offensive game. Look, it’s a blow, but we’ve got the guys. It’s not going to be one guy having to carry a lot of things. It’s going to be a lot of guys chipping in and contributing.”

Tatis spent time on the injured list last month with inflammation in his left shoulder. He leads the Padres with nine homers and 23 runs.

The 22-year-old Tatis has flourished on the road this season, hitting .385 with six homers and 10 RBIS. His 1.302 OPS on the road is the second-best mark in the majors of any player with at least 40 plate appearances, trailing only Chicago Cubs third baseman Kris Bryant (1.364). “It is what it is,” outfielder Wil Myers said. “We’re in a situation where things are going on right now but we’ll just adapt and keep going. We’ve got three new guys in here today and we’re ready for the game today.”

Profar has reached base safely in eight of his last 10 games. He is hitting .234 this season with one homer.

Mateo was called upon as a pinch hitter in the ninth Sunday in San Francisco. He had an RBI double in San Diego's 11-1 win.