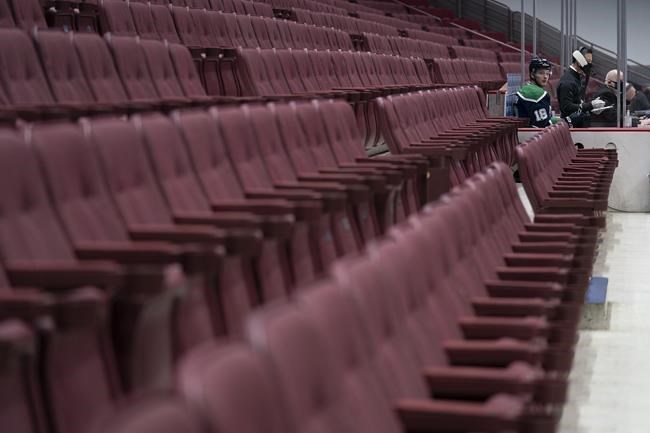 Dr. Bonnie Henry told reporters Tuesday that what's happening with the team is a reminder that the virus spreads "very, very easily."

“It just tells us that once this virus gets hold, it can spread very quickly, despite having routine testing protocols, having protocols to try and protect people as much as possible," she said.

Right-winger Jake Virtanen was the latest Canuck placed on the NHL's COVID protocol list Tuesday. Eighteen of the 22 players on the team's active roster are currently on the list.

Officials with Vancouver Coastal Health have been working with the team to make sure players and their families are being tested and getting the health care they need, Henry added.

She also disputed multiple reports that the Canucks' outbreak is linked to the P. 1 variant first identified in Brazil.

“I’m not aware that any of the cases in the Canucks organization are related to P. 1," she said. "I don’t know where that started, but not that I’m aware of.”

The Canucks and NHL have not commented publicly on results of tests since coach Travis Green confirmed the initial case last week.

Vancouver forward Adam Gaudette was the first to test positive during the outbreak, and was pulled off the ice midway through practice on March 30 after the result came back.

The NHL postponed four Canucks games the following evening when defenceman Travis Hamonic and a member of the coaching staff were added to the list.

Two additional games are now listed as postponed on the Canucks' website and it's unclear when Vancouver will return to the ice. A total of six games have been postponed.

A player on the COVID-19 protocol list has not necessarily tested positive. Players who are in self-isolation after travelling or who've been in close contact with someone who tested positive, for example, are also on the list.

The list does not include team staff or players not on the active roster, including those on the taxi squad.

The league's protocols require players and staff to be tested daily. Any time an individual's initial test comes back positive, the lab does a second test on the initial sample.

If the second test is negative, a second sample is collected. But if that sample returns a positive result, it's considered to be a "confirmed positive.''

The Canucks' outbreak comes amid a surge in cases across B.C. The province recorded 1,068 new cases Tuesday.

This report by The Canadian Press was first published April 6, 2021.